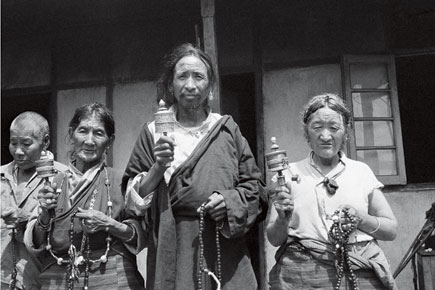 “How much do you know about Sikkim?” When Andrew Duff began his journey he was confronted by these words, spoken by a maroon robed monk at the Pemayangtse Monastery. What began as a personal fascination with his grandfather’s notes and photographs— when the latter lived in eastern India during the 1920s and 30s—unravelled as an Asian drama of Cold War proportions, and finally took shape as Sikkim: Requiem for a Himalayan Kingdom.

Requiem is a substantial work of history from the pen of a journalist. It details (not always in strict chronological order) the fascinating family and dynastic tale of the Namgyals, and the British ‘discovery’ of Sikkim in the 19th century as an ally against the Gurkhas of Nepal, with all the usual imperial machinations of treaties, trading rights and buffer zones. Lucid explanations of its ethnic, matrimonial and political connections with Tibet, Bhutan and Nepal are helpful in revealing the intricate web of peoples in this lesser known corner of the world. The chilling characteristics of international diplomacy and intrigue of the 1960s and 1970s, replete with the inadequate responses of a retreating British empire, strained relations and wars between India and Pakistan, the CIA and Kissinger, Nehru’s vacillations and Mao’s manoeuvres, all lead surely and relentlessly to a fragile state with unresolved questions of its separate identity.

Duff writes a political yet intimate tale of a ruling family and its colourful personalities; of their friends and dinner parties, of their naive but genuine love for their land and their desire to keep Sikkim independent. At its heart is situated the twelfth Chogyal (king) Palden Thondup Namgyal, along with his American wife Hope Cooke, his sister ‘the improbably nicknamed Princess Coocoola’, his Parsi friend Nari Rustomji and his staunchest opponents—the Kazi Lhendup Dorji and his Belgian-German wife Elisa-Maria Langford-Rae who adopted the title of Kazini of Chakung. If this cast of remarkable and diverse characters were not enough for a James Bond- like saga, throw in a 23-year-old Dalai Lama with a rifle as he is smuggled out of Lhasa, two successive Scottish headmistresses of the Paljor Namgyal Girls’ School in Gangtok (whose letters home are used as sources by the author), Indian diplomats and Pakistani presidents, and the plot thickens.

In the 1950s, events in Tibet had their reverberations in Sikkim. The Chinese were moving in and so were the Americans. The CIA handlers were already training Tibetan Khampas on the west Pacific island of Saipan, to be used against the Communists. By 1959 Lhasa was in flames and the Chumbi Valley was crowded with Chinese soldiers; the Dalai Lama entered India through Tawang in India’s north- east and made his way to McLeod Ganj, and Tibetan refugees poured into Sikkim. Thondup’s mother, who was a Tibetan by birth, and Coocoola, who was married to a Tibetan, spearheaded the effort to find them land and employment for their new life. As Tibet vanished as a buffer between India and China, Indian troops began to move into Sikkim, which they considered the weakest point on the new international border. In the same year the formation of a new political party, the Sikkim National Congress, marked the beginning of a new power struggle between Thondup’s claim to speak for his people and a potentially new democratic political system. The war with China in 1962, the death of Nehru in 1964 and deteriorating relations between India and Pakistan, leading to two wars and the birth of Bangladesh in 1971, were events that had ‘a significant bearing on Sikkim’s fate’.

It was left to India’s autocratic Prime Minister Indira Gandhi to ‘smash and grab’ (from Sunanda K Datta-Ray’s book Smash and Grab: Annexation of Sikkim). In 1975, India ‘annexed’ Sikkim, calling up, in the words of Hugh Richardson (the last British resident in Tibet), ‘the ghosts of Hyderabad and Goa’. When Datta-Ray’s sensational book was first released in 1985 it mysteriously disappeared from the Indian market after a defamation suit and an interim court order. Re-released in 2014 it announced to a larger audience its original position: that India’s incorporation of Sikkim was sordid and unjustified. Duff relied heavily on this during the early stages of his research and cites extensively from it.

Requiem is a poised narrative of the birth and death of a small Asian country. It is a complex story of Sikkim’s geopolitical location between India and China and its moving struggle to survive on the edges of Great Power rivalries. It is as much a discussion on the place of monarchies in the march towards democracy as it is of arrogant democrats and imperialist communists. Ably supported by extensive research of established works on this subject and enriched by newly released UK government files from the 1970s, the book also bristles with revelations from 500 secret cables from WikiLeaks. An extensive bibliography, detailed indexing, purposeful maps, and a collection of excellent and meaningful photographs complete this sobering history. A simple and elegant epilogue brings the story up to date: it tracks the deaths of the principal protagonists and the whereabouts of their descendants while reminding us that the ‘actual’ status of Sikkim and the relative position of its ethnic communities remain continuing themes in its politics.

Money has continued to pour into Sikkim from Delhi and corruption has continued to mount. As a state of the Republic, Indians from the ‘plains’, notably Bengalis, ‘started to make their presence known in Gangtok’. The new ‘immigrants’ add a new set of tensions to the already existing ones between Lepcha, Bhutia and Nepali. Pawan Chamling’s Sikkim Democratic Front has won the last four elections in the state and holds its own even against the Central Government. ‘So much so that one local journalist chuckled that he suspected that the irony of India’s takeover in 1975 is that it probably actually loosened India’s grip on the state.’

While many of us in India have known some of this history, the beauty of the book lies in its details: that it was the tiny El Salvador that demanded a debate in the United Nations on the Chinese aggression in Tibet; that the growing political movement in Sikkim for democracy and accession to India coalesced at least partly ‘around the disenfranchised Nepali minority’ (which has since grown to a numerical majority); that India airlifted Tibetan troops into the state of Mizoram to fight the elite Pakistan Special Services Group in Bangladesh’s War of Liberation; that in 1975 Mrs Gandhi declared the Emergency and annexed Sikkim; that ham radio enthusiasts, which included Thondup himself who as AC3PT sent out a distress transmission, managed to bypass the ban on journalists and announced the coup d’etat to the world.

Faithful to his sources, Duff does not allow his undisguised affection for Sikkim (for whom he writes this requiem) to cloud his historical elaborations. He is even-handed in his chronicling of British policy, Thondup’s complexities, and India’s and China’s political self-aggrandisement. Additionally, this accessible history is embedded in the necessary geography of the region. One cannot understand what happened in Sikkim unless one knows the Chumbi Valley and Nathu La, or the precise location of Lhasa, Darjeeling and Kalimpong—and the author makes sure we understand this.

We may complain of the absence of the conflicting versions of Sikkim’s history that survive in the memories of its people—which Duff hints at in the introduction but does not develop in subsequent chapters—but this is clearly not a people’s history. We encounter the ruling classes and many bureaucrats, but fewer agitators or frontline soldiers, and that too mostly in footnotes. A single paragraph in the epilogue refers to conversations with people who remember Thondup as ‘a good man’ who was dealt ‘an almost unplayable hand’.

As with all histories, the book is an ‘unending dialogue between the present and the past’ (EH Carr)—and with every generation a newer version of the old story emerges. Not merely because new sources come to light, but also because there are new reasons to tell those stories. Sikkim could have remained independent like the other Himalayan kingdoms of Nepal and Bhutan, but it didn’t. It became India’s 22nd state. While it currently appears to be focused on economic development, trade and tourism, in resurrecting its history, Requiem forces us to reconsider and reassess India’s seemingly innocuous and widely accepted project of nation-building.

(Anjuli Kaul has taught history for three decades and is co-founder of The Learning Centre, Goa)