For Whom the Drums Beat 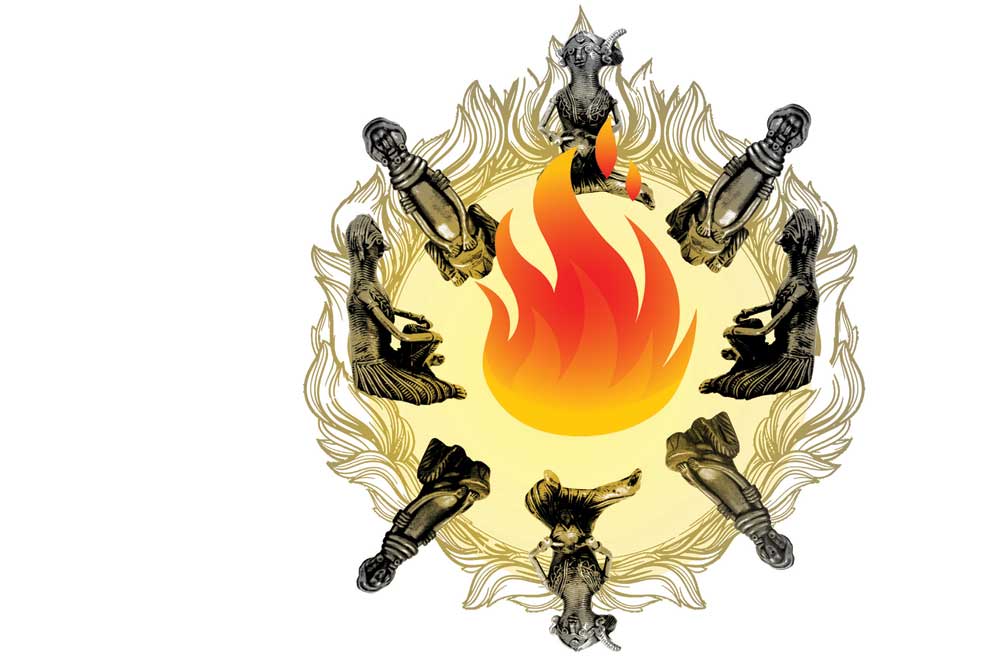 A SUCCESSFUL anthology evokes both a singularity of style and a diversity of content. Listen to the Flames, a collection of Dalit literary writing, is an attempt to create a Dalit aesthetic.

As a project, it has a threefold intention. Firstly, it announces the arrival of what Tapan Basu calls a pan-Indian Dalit consciousness. Dalit writing is no longer Maharashtrian writing or Telugu writing. It creates a universe for a wider imagination. Secondly, the project, through the very encounter of reading Dalit stories, makes the reader reflect on his own prejudices, the comfortable little stereotypes which enforce a Brahminic perception of caste. Thirdly, it is an attempt to show how a genre of writing invades the canonical. It is a celebration of language, a declaration of the politics of new forms of understanding pain, ecstasy and irony. Despite achieving all this, the book signals that it is a mere prelude to a new way of celebrating literature, adding nuance, resilience and creativity to the imagination of Indian democracy growing stale on secularism, electoralism and majoritarianism.

One should not begin at the beginning of the book. Open it anywhere in the middle to the story on Gandhi or the poetics of the drum, and read loudly. One can sense the rhythms, the sounds, the resonances of an oral tradition in the prose. Orality is not illiteracy. It is a different way of inventing knowledge, language and memory. Orality introduces the rhythms of the body into print. Cold print as type is no longer clinical and priestly. It echoes feelings the Gutenberg man has forgotten.

Think of a drum, think of world of percussion beyond jazz and even African drummers. Art and life combine in the wristy magic of fingers where the writing as a form of drumming leaves one in awe. The very creativity of a Dalit drum spells a form of resistance beyond the primly subaltern. Spivak’s question ‘Can the subaltern speak?’ finds a different answer in the Dalit drum. Sound cannot do without the christening of smell and touch.

A drum is a second skin forged out of the slaughter of a buffalo soaked till the animal’s hair falls off. It is stretched out under the sun to dry, pegged tightly at four corners as if it is a primordial canvas. The skin needs to be treated with herbs, with the juice of jackfruit bark. No alchemist could be more particular as the drummer waits for the skin to ripen, wait till each beat of the drum brings the right response. The drum is not an antiseptic affair. The pungent smell of cattle urine, cooked meat and dung on the floor seeps into the act, forging a different memory. It demands the Rabelaisian sense of the sensual and the sexual. It demands the rituals of obscenity because making a drum is a bit like a fertility ritual. Instead of seed, skin has to guarantee the reproduction of the right sound. The irony is that the drum maker is hard of hearing but his sensorium of competence ensures he is still the only one who can make such a drum.

Think of a drum. The very creativity of a Dalit drum spells a form of resistance beyond the primly subaltern

The drum galvanises the drummer, giving him a new sense of joy and life. Chinnakuzhandai was a master drummer who drummed the sounds of every ritual, every rite of passage. No life cycle ritual could be complete without the sounds of a drum. Yet one knows that in that desperation of celebration, the drum is a dying instrument quietly giving way to the imitativeness of the city band. Yet the old man drumming, evoking new sounds, summons a utopia where time and technological progress stand still. An embodied Dalit aesthetic defies technology to evoke the classicism of a primordial technique. Aravindan’s classic story captures the story of a Thappu drum, whose very moment of dying evokes new dreams, even utopias. The very idea of the music and acoustics of resistance goes beyond speech as a genre of creativity.

Sanjaya Kumar Bag’s Odia satire on Gandhi and an election seen through the eyes of an old man desperate to believe the iconographic Gandhi is another little classic. The potent mix of faith, satire and irony around Gandhi and the election virtually becomes a fable of democracy. It is not cynical because no one believes more in democracy than the Dalit. ‘The Black Ink’ becomes, with a simple recitation that ‘the day India got independence, Gandhi was present in our village’. The very presence begins a promise, act of faith, a testimony of being about democracy. Of course, the poor villagers did not understand the words he used. Words don’t matter when words are treated like bonds, oaths in an oral society. When words seal social contracts, democracy sounds like a festival of promises. Gandhi’s message was simple, ‘Kingship is dead. Long live democracy’, and Gandhi had defeated the British.

The slow erosion of faith in Gandhi from icon to token to index is what the narrative captures. Budhadada was obsessed with Gandhi even if he did not understand him. Faith in an icon goes beyond analysis. The simplicity of the act has an integrity to it.

The erosion is everyday and consolidated with every election. Elections capture the tokenism of democracy as Gandhi gives way to Gandhians, Congressmen in khadi, zamindars playing politicians. Life does not change. One waits for Gandhi’s return as he had promised, but he never returns. What passes for return and renewal is the politician emptying Gandhian words of content, of meaning. Yet, Bag shows that the Dalit belief in elections survives. There is desperation to the belief as populism and ritual display of equality are confused with democracy. But even the cynicism of the Congress cannot corrode the Dalit belief in democracy. Gandhi and democracy survive intact in the mind of Budhadada. Its very simplicity creates awe even in the cynical reader. Yet even faith can be challenged as Budhadada waits for Gandhi to return. But the only symbol of Gandhi that returns is the currency note. The story becomes a semiotic fall of democracy through the erosion of Gandhian symbols like khadi and the Rs 500 note. The final act begins a protestor tears the note, indicating that democracy as value has turned inflationary. As a fable of democracy built around the promise and erosion of the Gandhian idea, the story is poignant.

One can cite more stories, but this much the book does: it shows that Dalit ethics and aesthetics begin with the body and challenge the idea of caste as sensorium. The primordial power of these two worlds gives language and literature a different power. The very power to disrupt grammar of caste lies here, and this is the message of the book. Between language, orality, memory and the sensorium lies the promise of a Dalit critique of caste and electoral politics. One realises that literature has the creativity to renew democracy. Listen to the Flames is an anticipation of that promise.