Fatima Bhutto: ‘I like women who are not afraid to cut down giants’

The new novel by Fatima Bhutto returns to questions of identity and power. She talks to Shikha Kumar about the politics of imagination 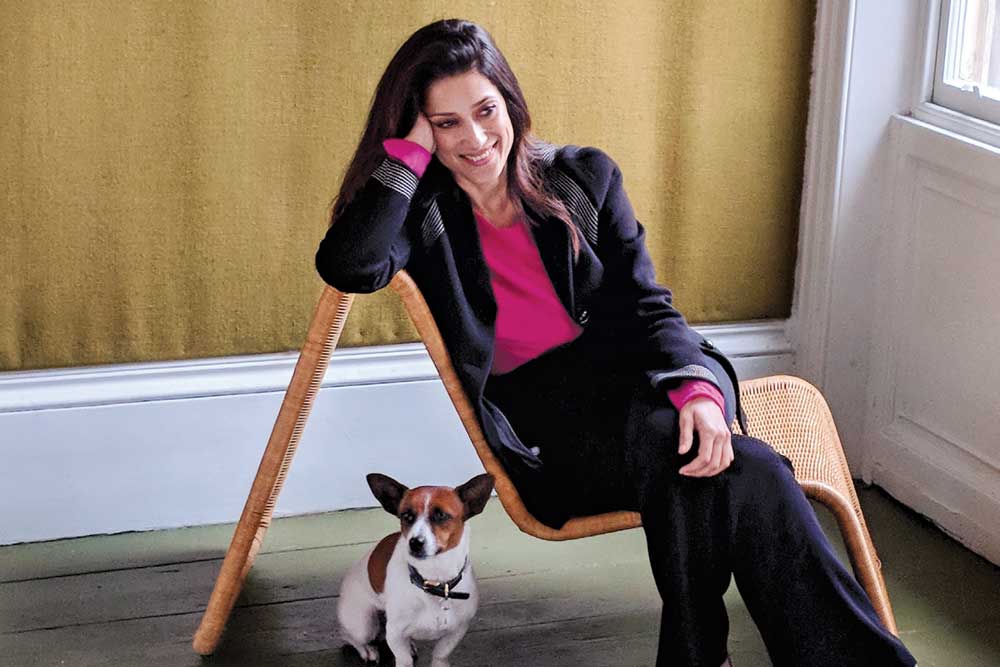 FATIMA BHUTTO believes writing a novel is always a mysterious process. You start with something in your mind, and for her that niggle has always been disturbance—what she’s haunted by and can’t quite get rid of. It’s what happened four years ago.

In 2014, when she began working on The Runaways (Viking: 402 pages; Rs 599), the internet was full of dark spaces. There were Q&As, ask-me-anythings (AMAs), Twitter threads, and Tumblr blog posts by young men who had run away from home and gone off to fight in Syria and Iraq. But it wasn’t the thread of violence in the content that surprised her. “Since the invasion of Iraq and of Afghanistan, we’ve been seeing really disturbing videos come out of drone cockpits and fighter jets, of American soldiers wittering [among] themselves. And their attitudes were not much different from those of the young men. It was the same sentiment—young men having the small power of violence in their hands, and using it against people who are weaker,” she says over a Skype call from Pakistan.

What Bhutto found shocking was the loneliness underpinning the questions—men asking how they would get the things they were used to at home if they ran away and joined these movements, if they’d miss their families, how they would talk to their mums, if Skype calls were easy to make. “The monotony of being out on guard, watching—those kinds of things I didn’t expect. They remind you that these ferocious people are actually young men who are similar to young men everywhere,” she adds.

The Runaways, the author’s latest novel, takes us into the lives of Anita Rose, Sunny and Monty, young people from very different social milieus who’re grappling with the same questions of self-worth, identity and power. Shuttling between Karachi and Portsmouth, Bhutto weaves a gripping tale of modern-day confusions and frustrations that lead the three protagonists to leave the safety of their homes, finally crossing paths at a camp of fundamentalists in Mosul.

“I was thinking of this sense of being wounded in the world, and the amount of pain one has to be in to inflict violence— not just on yourself and other people, but really on the sense of the world around you,” she says. There were questions around jihad too; for Bhutto, its essence is a battle against the self, and this is what she wanted to explore, the battle against the world being a much smaller, less significant jihad.

Beneath the interconnecting threads is also an attempt to deconstruct extremism, and view it through the prism of millennial confusions. She believes that it’s a bewildering time to be a young person in the world today. And that “there’s a very Western debate on identity that’s being imposed on everybody”. Western because people in the East have never had the same binaries, our sense of identity having always been multiple.

“You have your identity, your parents’, your grandparents’, your village’s, your provincial and ethnic identity and your religious identity. We’ve never been forced to slam ourselves into a small book. And it’s confusing because on one hand, identity is now binary and singular, and on the second hand, it’s movable and flexible. The idea that we expect extremists to be only one sort of person is dangerous. How on earth do we understand extremism if we’re thinking that way?”

The Runaways is the 36-year-old’s third work of fiction after The Shadow of the Crescent Moon (2013) and Democracy (2015), a short story that was sold as a Kindle single. It’s her 2010 memoir Songs of Blood and Sword that is arguably her most controversial work. Centred around her father Murtaza Bhutto, who was killed in a police shoot-out in 1996, the narrative spanned her own impressions of her father from the time she had spent with him, coupled with accounts by his friends and colleagues. Bhutto ruffled many feathers by accusing her aunt Benazir, who was Pakistan’s prime minister at the time, and her husband Asif Ali Zardari of being accomplices in her father’s killing.

“The idea that we expect extremists to be only one sort of person is dangerous. How on earth do we understand extremism if we’re thinking that way?”

Critics termed the book a one-sided version of events, while her aunt Sanam Bhutto called it a fictional delusion and an assault on “her family, on reality and above all, the truth”. Bhutto says she wasn’t particularly fazed by the criticism—she knew that people who had benefitted from a corrupt and violent political system would defend that system aggressively. It’s also a book she was determined to write and she spent six years researching it, travelling to America, England, France and Syria for the purpose.

“I even met my grandfather [Zulfiqar Ali Bhutto’s] critics, people who not just didn’t agree with him but were his political enemies. I went and spoke to them because I wanted a fuller slate, as it were,” she says. “Songs of Blood and Sword is a book about my father, who I adore. It’s a book really about love. It’s the book I promised my father I would write right before he was killed.”

Bhutto’s time with her father was short lived—she was 14 when he was killed outside their family home in Karachi—but it’s a period she holds close to her heart. He was watchful about what she was interested in, and encouraged her in ways that looking back now, she feels grateful for. One of her fondest memories is interviewing him using her toy recorder. “Every evening, I would have a different set of questions and he would treat the whole process quite solemnly. He never said ‘hurry up’ or ‘we can do it later’. He would read to me as a child, and as I grew up, we would discuss the books we were reading together.”

It was Murtaza who egged Bhutto to take writing seriously—she was around 10 years old the first time he cut out publishing details from the back of The Economist. “He would tell me, ‘Why don’t you send them some of your samples’ and I said, ‘Are you serious?’ He was. As a young woman and as a reader or writer, you really can’t ask for more than someone who believes you have a right to speak and who pushes you to speak,” she says. She published her first book of poems, Whispers of the Desert, shortly after his death.

Bhutto’s family history has been mired in tragic violence. Her grandfather Zulfikar was hanged on murder charges under the Zia military regime, her uncle Shahnawaz Bhutto was poisoned, and Benazir was killed in near-similar circumstances as her father. Bhutto says she wouldn’t have had the skills or emotional ability to process emotions like fear, anger or even being in the public eye had she not had her father’s joy underpinning her early life. In an emotional tweet on his death anniversary in September, she wrote: ‘Though they killed my beloved father two days after he turned 42, every year on this anniversary I am reminded of the undiminished power of love above all.’ “He was not a bitter, angry person. He treated simple things like going and having a juice or going for a walk in the mountains with so much wonder. I can’t help but remember how beautiful my father found the world. That gives me a lot of stability and hope, when I feel worried, confused or uncertain.”

“True life is lived politically, whether you’re a writer, a doctor or an artist. You don’t need to stand for elections if you are living your life politically”

Being in parliamentary politics never interested Bhutto. She has firmly stated that she doesn’t believe in “birthright politics” and would rather be political through her writing. Her columns have spanned religious extremism and sectarian violence—a searing op-ed she wrote for The New York Times on Shafqat Hussain, a juvenile who was placed on death row, called on Pakistan to raise its voice for compassion. “I think true life is lived politically, whether you’re a writer, a doctor or an artist. You don’t need to stand for elections if you are living your life politically.”

Her politics has seeped into her fiction too. The Shadow of the Crescent Moon is set against the background of America’s invasion of Afghanistan, while Democracy is centred around the 1999 coup of Pervez Musharraf. As a writer from the Subcontinent, she believes it’s impossible to avoid politics, and she’d rather not.

“Western writers have a very complacent, indifferent approach to politics. They don’t feel like they need to engage with their country’s imperial or murderous policies around the world. An American writer can write a non-stop barrage of books about upset marriages and suburban life and not feel like they have to take into account their country’s place in the world, their violence in the world. But we certainly don’t have that luxury. We don’t live such disconnected lives,” she says, adding that politics is embedded in the way we live, what we eat and how we get our food.

Her next project is a non-fiction book whose details, she says, will be out soon. Meanwhile, she continues to be inspired by fellow women writers— Sonia Faleiro, Meena Kandasamy, Rachel Kushner and late poets Eunice de Souza and Fahmida Riaz— who have a considered, investigative approach to their writing. “All these writers are quite political and I like that. I like women who are not afraid to cut down giants.”

Bhutto has advocated social reform and women’s rights—she supports the right to choose when it comes to the burkha—but tokenism is what upsets her. “I find these microfinance projects and women’s self-help groups in rural environments quite remarkable. They’re pooling their money and knowledge to help each other, and that’s what uplifts women, helping each other. I don’t quite see the same thing in politics, where it’s a tokenistic give-women-some-position- or-responsibility.”

Bhutto has a fervent interest in pop culture, believing that the politics of our society and generation are encoded in its products. She’s called out Hollywood for furthering stereotypes and normalising a singular narrative of Islam. In June, ABC television network apologised for an episode of Quantico that portrayed Indian nationalists framing Pakistanis in a terrorist plot. Bhutto was quick to tweet that she was now waiting for an apology from Homeland, 24 and Zero Dark Thirty, among others.

“I can barely watch Homeland. Its fundamentals are so racist that it ceases to be entertaining and starts to become insulting. What I’m interested in is our own adventures in film, TV and books. It’s time our stories and histories are told by ourselves, not handed to the Western world to distort and denigrate like they do with colonialism and the Raj,” she says.