End of an Aura 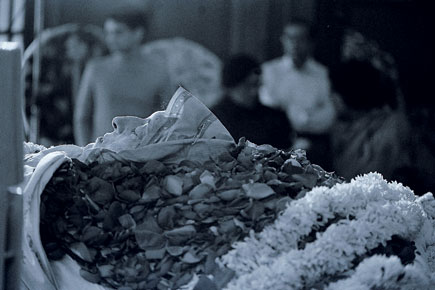 The daughter of Jawaharlal Nehru stood staring into the chasm of infamy in 1979. Indira Gandhi was 62 years old, twice the age of the nation she had ruled for two terms. Her years in office had cast both an imperial and authoritarian shadow over South Asia; India’s most dominant public figure since Independence faced political and financial ruin. Two years earlier, the ‘Empress of India’ had been humiliated by defeat in the election of 1977. The world’s largest democracy—a total of 194 million people— had given her rivals, Janata, 40 per cent of the vote. Janata took 299 Parliamentary seats; Congress won 153. It would be the first time India voted for a non-Congress government. In the Nehru dynasty’s stronghold of Uttar Pradesh, Congress was lashed by the electorate when it failed to win a single seat. The former Prime Minister also lost her own seat in the constituency of Raebareli. She was unseated by a loose coalition who had rallied around one slogan: ‘End Dictatorship, Dethrone the Queen’. Gandhi was an immensely unpopular candidate on the campaign trail. At one pre-election rally, a number of women turned their backs to her—the BBC’s longtime India correspondent Mark Tully reported that an irritated Gandhi exited the platform and physically tried to turn the women around.

Diego Maiorano’s Autumn of the Matriarch is the first long-form account devoted to Gandhi’s final term in office. Maiorano is a research fellow at the Institute of Commonwealth Studies, University of London, and has written on Indian politics for World Development, Economic and Political Weekly, Modern Asian Studies and The Hindu. Autumn of the Matriarch is his first book. This biography, academic in its tone and content, focuses on Gandhi’s last years in office—from January 1980 to her assassination in October 1984. The author draws on statistics from the Indian push towards industrialisation, Gandhi’s refitting of the military and violent insurgencies in Punjab, Assam, and Kashmir. While he doesn’t comment expansively on Gandhi’s legacy, he briefly focuses on a number of trends that have influenced India in the last three decades.

According to Maiorano, Gandhi’s political troubles had begun during her second term. The war with Pakistan in 1965, while draining India of financial resources, did not bring any significant political upswing. The devaluation of the rupee in 1966 also seriously affected the Government’s popularity. There were also seismic changes occurring in India’s farming heartlands. With the Second (1956–61) and Third (1961–66) Five Year Plans, the Indian Government adopted a strategy of rapid industrialisation. Public investment in agriculture severely diminished. In the wake of this economic crisis, argues Maiorano, Gandhi scythed India’s democratic institutions. Rising fuel and food costs— coupled with widespread corruption and joblessness among the middle classes—had led to waves of strikes in urban cities. Incensed, Gandhi instituted emergency measures to jail strikers and dissident students without trial, he recounts; 50,000 people were jailed.

Yet, two years after defeat, Gandhi returned to the centre of power with a historic fourth term in January 1980. According to Maiorano, the coalition against Congress had decisively failed. Gandhi retook power at a moment of nation-wide urban unrest, economic stagnation and humanitarian devastation. In the months preceding the election, the worst drought in a century had affected 17 states. Food production declined by 17 per cent, and the Government was forced to leverage its buffer supplies of grain. The Army was employed to use trains and military trucks to distribute drinking water. Maiorano then outlines a fourth term beset by challenges both local and international in scope. Tribal violence disrupted the northeast of India in Assam, where violence had been a mainstay since the last years of the 70s. Sikhs in Punjab were also demanding more autonomy and a path to independence. In neighbouring Sri Lanka, a civil war gave rise to the Tamil Tigers. In Afghanistan, the Soviet invasion had created the Mujahideen.

Autumn of the Matriarch argues that both Gandhi and the Congress could lay claim to several economic achievements at home. Direct taxation was restructured in a way to benefit income tax payers. The exemption limit for income tax was raised from Rs 10,000 in 1979-80 to Rs 15,000 in 1984. This liberated two million people from the tax net. Gandhi also alleviated small numbers of India’s impoverished classes.

She also modernised the country’s ailing armed forces. In the late 70s, India’s military equipment was purchased almost exclusively from Russia. Efforts were made to diversify with the most sophisticated arms available. India started buying aircraft from France, submarines from Germany, Jaguars and Harrier jets from Britain and arms from Israel. Kickbacks and corruption proliferated. By the end of Gandhi’s fourth term, India’s military superiority was overwhelming, Maiorano tells us. Armed forces were made up of 1.1 million soldiers (the remaining South Asian forces combined totalled 687,000), 2,300 tanks (the rest of South Asia had 1,386) and 670 aircraft (the rest of South Asia had 248).

Autumn of the Matriarch is overwhelmingly academic; it exhaustingly lists its sources but features no interviews with Gandhi’s contemporaries. Followers of Indian history will be further disappointed that neither the ageing politician, nor her sons Rajiv and Sanjay, nor her rivals, loom large in Maiorano’s well-researched but scholarly book. Gandhi’s policies are explained in abundance in these pages— however, the leader herself is absent. (For a sense of theatre and urgency, readers should turn to Indira: The Life of Indira Nehru Gandhi by Katherine Frank, 2010).

The book ends with her death: Indira Gandhi was assassinated on the morning of 31 October 1984 by two of her Sikh bodyguards. According to the investigating Ahuja Commission, between 31 October and 7 November, 2,733 Sikhs were killed in Delhi alone. Maiorano doesn’t dwell on Gandhi’s impact, but 30 years after her death, she remains a controversial figure in Indian politics. Her greatest legacy may have been to introduce and condone a system of family clan politics and patronage. Without the Gandhis of India, would we have the Bhuttos and Sharifs of Pakistan?

(Burhan Wazir is the editor of Qulture.com)