A Bangladeshi writer discovers the East 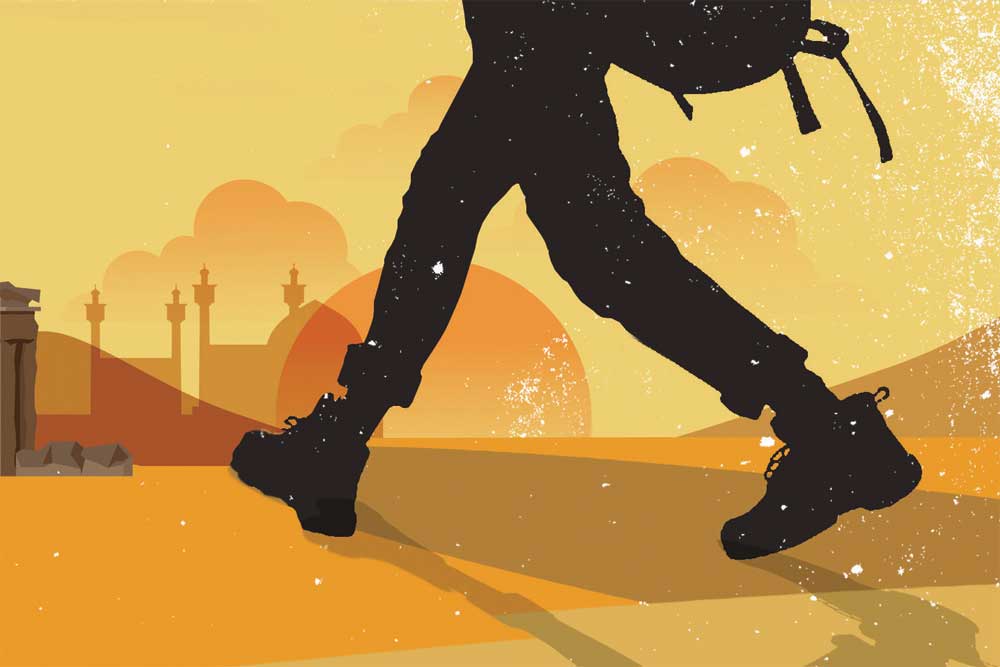 India has a smell of its own that ambushes your olfactory organs the moment you step out—a sweet paan masala flavour, mixed with many different kinds of incense, Nagchampa and Chando mostly, and pata biri, along with bits of vegetarian body odour and channa from the roadside stalls. The smell begins right at the border between Benapol and Haridaspur and ends neatly before Lahore, like a kind of scent marking. Personally, I like it.

ZEESHAN KHAN’S Right to Passage falls into a slender category of books that, these days, I find I rather favour: a South Asian writing about travels in the world, preferably those parts of the world that our West-obsessed newspapers do not devote much time to. The God of this #Travel #ContemporaryHistory #CivilizationalDigest genre is, of course, VS Naipaul. But other than him, I can only think of a handful of books— Vikram Seth’s profound From Heaven Lake, Amitav Ghosh’s erudite Dancing in Cambodia, At Large in Burma, Pankaj Mishra’s adventures in Central Asia and beyond, and Pallavi Aiyar’s chatty Chinese chronicle Smoke and Mirrors. Further away, on the even bleaker African side of things, there is only Teju Cole (Everyday is For the Thief), and he is now based in the US. A section of Binyawanga Wainaina’s superb memoir One Day I Will Write About This Place chronicles his travels in Africa—an important testament to the times. That’s about it.

But it is not that travel and geopolitics do not collide elsewhere. Ever since the age of explorations underpinned the colonial imperium, Anglophone writers from England—and later, from America— have been using currency arbitrage in their favour to travel around and write about the Rest of the World. The whole discipline of anthropology was born out of this. But it is rather difficult to find books by South Asian (or African) writers about their travels in RoW.

So, long story short, even before I began reading Right to Passage, I was excited. A young Bangladeshi writer (he has a British passport, unfortunately for my theory) chronicles his two-month-or-so- long travels in India, Pakistan and Iran.

There is something refreshing about the premise itself. And what sweetens the deal is the sheer ambition the author projects onto the narrative— a chiaroscuro of light and shade across the history of several millennia, going back and forth in chronological time with an infectious giddiness. You get a glimpse of Ashoka charging with his army towards Kalinga, of a gaunt Siddhartha under the Bodhi tree to, suddenly and most powerfully, the ‘babbling fool’ Thomas Babington Macaulay making grand statements in singular half-assery. If, on the Indian leg, you are arrested by a terrible video unspooling in your head of peaceful protestors dying in the firing at Jallianwala Bagh, in the outskirts of Taxila near Lahore, you are suddenly transported to a palace where the Gandharan prince Shakuni machinates. The kaleidoscope rattles, the tube turns and suddenly it is contemporary Lahore, and in the fading afternoon, light-hearted Sufis are singing at the Data Darbar dargah. And then, in the blink of an eye you are in Mashhad in Iran a long time ago.

It is an epic journey alright.

Khan takes a plane from Dhaka to Patna, and after that, almost all his journey is overland as travel on land ‘reveals the continuity of terrestrial space… in exactly the same way air travel confounds it’. From Patna he goes to Bodh Gaya, and then, in an auto, to Rajgir, a place even Indians seem to have forgotten. The Jain prophet Sri Mahavira delivered his first sermon here and Ashoka breathed his last here. Even Muslims have put in their bid—one of the hot springs here is said to have been formed when the Sufi Makhdoom Sahib threw pebbles at a rock face to scare off a tiger.

After Nalanda, Khan goes to Delhi, then Amritsar and the Wagah border. In fact, he is probably one of those rare individuals who have attended the evening ceremony at Wagah from both the Indian and Pakistani sides, drawing interesting conclusions.

In Pakistan, Khan travels to Lahore and Taxila, Islamabad, Peshawar, Multan and Quetta, reflecting and observing, talking to people, explaining again and again that he might be a Khan but his roots are in Bengal, not Peshawar, and acquiring interesting insights on the state of affairs. While most are serious, some quite humorous.

Pakistanis are more conservative than Indians in almost everything except their opinions. People state their prejudices candidly and don’t seem too concerned about niggling things like political correctness. They will quite happily say, for instance, that the Taliban are non-Muslim, that Americans are imperialist pigs, and that Pakistanis are better-looking than Indians.

The section on Balochistan is fascinating, not in the least because a sense of danger clouds his travel plans. Indeed, it is off to an ominous start when 26 Shia Hazara pilgrims going to Iran are butchered just as he arrives there. In Balochistan, under the same cloud of violence, he also encounters Americans:

Hassan Uncle takes me on drives out of the city along dirt tracks that run past dusty military compounds at the base of rocky desert mountains. He tells me that the US army flies missions out of these… He shows me the barracks where US marines live and they look just like the ones in war movies, basketball court and all. The whole base is intimidating and there’s an overwhelming presence of force.

BUT KHAN RESERVES half of his book for Iran, and it is quite apparent that he’s fallen in love with it. Travelling extensively, from Kerman to Rayen, Mashhad, Neyshabur (home to the mausoleum of Omar Khayyam), Tus, Yazd (a centre of Zoroastrianism where Indian Parsis have restored the oldest fire temple), Esfahan, Kashan, Shiraz, Persepolis, Ahvaz, Chogha Zanbil, Shush, Hammurabi, Tehran and Tabriz, the city where Shams-i-Tabrizi, the great guru and some say lover of Rumi, came from. In spite of his minimal Farsi, Khan reveals an Iran that is a far cry from what Western propaganda would have us believe. Khan’s view also works as a timely corrective since the image of post-Revolution Iran is often frozen in people’s heads via the popular images of Marjane Satrapi’s black-and-white graphic novel Persepolis and Azar Nafisi’s powerful memoir Reading Lolita in Tehran. Unfortunately for Iran, they perpetuate certain troubling stereotypes in the minds of undiscerning readers.

For all his grappling with history, Khan is no dry historian, and, though it threatens to overwhelm with information every now and then, this is not an academic book. What suffuses the text with a critical authenticity is its honest engagement with the question of identity, and what makes this quest especially jaunty is Khan’s idealism.

As a Bengali speaker, Khan is not hesitant to look beyond the muscle of his mother tongue to the bones of Sanskrit (of course, in his spelling, he insistently follows the Bengali pronunciation. Boishnobism? Please. I’ll stick with Vaishnavism, thank you very much.) and to the universities in ancient India. As a practising Sunni Muslim, he is unafraid to fall in love with the Persianate mostly Shia culture of Iran. And in this, he represents the ideal that many had hoped Bangladesh would embody after its independence in 1971 and which has tragically come under severe attack from Islamism in recent years.

Ultimately, Zeeshan Khan’s voice reminds me of the quintessential Bengali addabaaj dada who travels for the sake of travel, enjoys various cuisines, and seeks out discussions at the drop of a hat. There is also a boyish element that slips into a first person superlative: so and so delicacy was the best he’d eaten ever, this person was the kindest ever, and likewise. But in a book that steers clear of memory, Khan’s enthusiasm provides the perfect foil to the historical anecdotes and philosophical dalliances that go on to make this book a valuable addition to your shelves. You might often find yourself disagreeing with his conclusions or getting annoyed with his artful balancing (the lot of the liberal), but you shall, after a page or two, find yourself amused again by his openness, his willingness to be corrected (‘I am thoroughly pleased to have been re-schooled by Dr Mahajan,’ he says in Patna), and his sheer spunk.