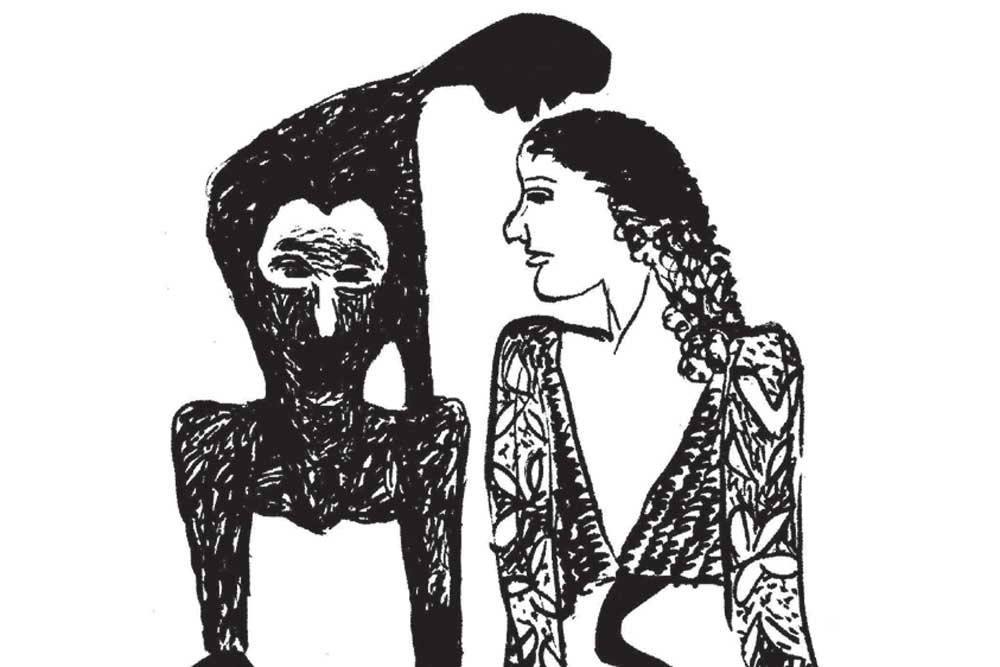 THE IMAGE THE world in general has of Rabindranath Tagore is of the venerable sage, head bowed in contemplation of eternity; the mystic and prophet, with his piercing eyes gazing into other worlds known only to the poet.

The Tagore family has been central to the cultural life of Bengal. Born in Calcutta in 1861 into this wealthy and cultured nexus of poets, artists and musicians, Rabindranath, the youngest of many gifted children, became the greatest of them.

It is difficult not to be awed by the magnitude of his work which encompassed poems, songs, lectures, essays and paintings, as well as the multiplicity of his interests, from his childhood mysticism to his adult involvement with education and nationalism. WB Yeats—who was the first person to discover and promote Tagore in 1912, leading to the publication of his collection of poems and songs, Gitanjali, which won him the Nobel prize a year later— said that a true poet always retains the wondering eyes of a child, to the end. Tagore held that the object of poetry was to ‘knock at the door of the mind and heart’… who better to open that door than the child or the lover?

My migratory songs are on wings,
seeking their nests in thy voice.

Most often, the reader is confused, rather than drawn nearer to the poet, by literary criticism preceding a volume of verse. But in this beautiful little volume Knockings at my Heart, compiled and edited by Nilanjan Banerjee and strikingly illustrated in pen and ink by KG Subramanyan in the Japanese style, the reader takes in the essence of Tagore much in the way a hummingbird strikes at the heart of a flower to taste the nectar.

Published here for the first time, these poems were collected from Tagore’s visits to China and Japan from 1913 to 1929, when he composed short poems while signing autographs, inspired by the famous haiku form. The majority were written in Bengali, with English translations and a few directly in English. The font used echoes Tagore’s own distinctive calligraphy.

Haiku is traditionally a short poem in Japanese, whose singularity lies in the juxtaposition of two images or ideas. These seemingly contradictory elements are fused together with spontaneity, sensitivity of emotion as well as with strength of technique. At the core is absolute simplicity and directness of expression, underscored by a complexity of emotions.

The perfect way to approach Tagore seems to be in these brief poems of his, where one goes directly to the heart, to the source, to drink in pure draughts of wisdom, of lightheartedness, of passion, of sorrow, that dissolve like dewdrops in the mouth.

‘Try always to forget yourself, then you will be happy in whatever surroundings you may find yourself’, the humanist Tagore wrote in a letter to a former pupil of the international university Visva Bharati that he founded. He continues, as if to himself, ‘I need nothing for myself. Through whichever path you lead me, I will at last arrive at your temple door. Be great! Be great! Free yourself!’

He wrote in the simple, unadorned style of spoken Bengali, inventing a medium between poetry and prose.

Yeats wrote in 1935, ‘Tagore does not know English, no Indians know English’, but Tagore answers:

Break the difference and it is multiplied.

There remains the problem of literal translation, especially with the Bengali language. Most translators of Tagore seem to have such reverence for every syllable that he wrote that they fear to translate according to the dictates of the spirit, rather than the letter, of the text, as in:

I am the south wind that do not
claim honey from the flower,
but only its faint timid whisper.

But for the most part, the translations in this collection are impeccable. A ‘Haiku moment’ is a state approaching zen, where we see the world surrounding us with new eyes; where the poem changes our perspective, and we are, if only for the moment, changed. Listen :

Mind, like a brook, starts up at a sudden
liquid note of its own that is never repeated.