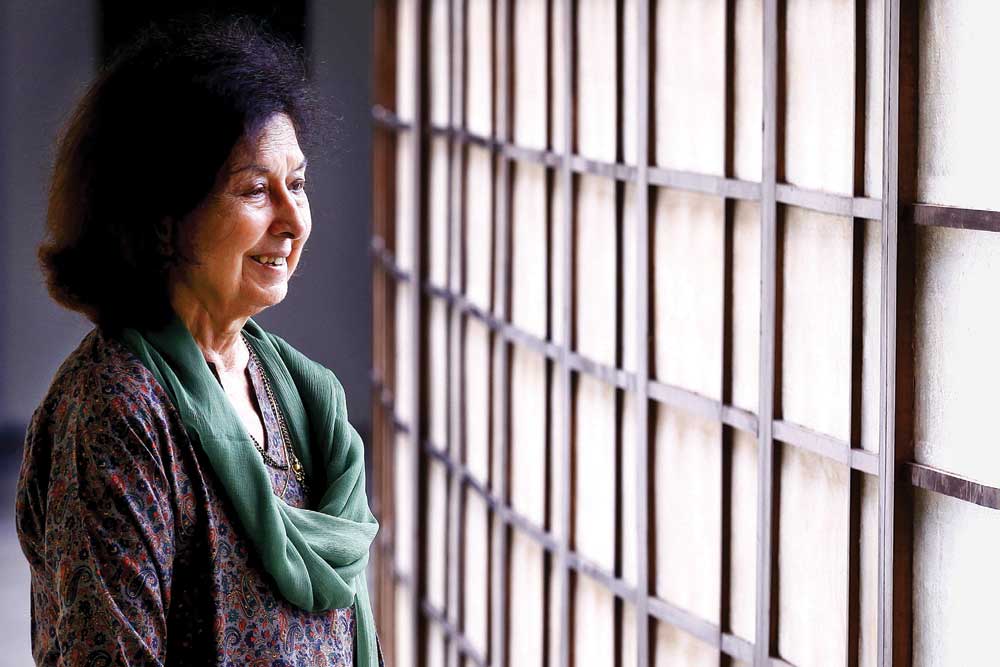 NAYANTARA SAHGAL is undoubtedly one of the great practitioners of Indian Writing in English; and in her remarkable oeuvre spanning six decades, what seems striking is that her contributions to both fiction and non-fiction are nearly equal in weight, with ten-odd books in either genre.

Sahgal wrote her first book, the non-fiction Prison and Chocolate Cake, in the early 50s, staying for a while with Jawaharlal Nehru and Indira Gandhi at Teen Murti House. Within this charming memoir of growing up during the freedom struggle, Sahgal unforgettably embedded the three sources of inspiration who would continue to cast long shadows on her life’s work, whether fiction or non-fiction: Jawaharlal Nehru, her beloved ‘Mamu’; Vijaya Lakshmi, her ebullient mother; and Ranjit Sitaram Pandit, her erudite father who passed away in 1946 much too early. These three shaped Sahgal’s worldview in such a way that throughout her life, in all her books, Sahgal or her characters find themselves examining and re-examining Independent India through the lens of Nehruvian idealism, tempered with Ranjit Pandit’s perspective on ancient Indian literature and history and inflected by Vijaya Lakshmi’s progressive womanism.

Sahgal’s latest offering, the curious novella When the Moon Shines by Day, is no exception to this pattern. The narrative is set in a dystopic India where Hindu right-wing politics has completely overtaken the national narrative, and minorities—religious or otherwise— have been pushed to the margins. Muslims live in ghettoes, Dalits might be lynched at any time, and art galleries are vandalised if the long-dead artists might have had a whiff of progressive politics attached to their reputations. The powers-that-be smile benignly over caste-based eugenics projects and wholesome nationalism-inspired ‘art’ while dissent of any manner is mercilessly squashed by their not-so-benign goons.

The protagonist, Rehana, is, true to type, deeply influenced by three shadowy figures from the past. Her father was a renowned historian, whose books on medieval India have now ‘disappeared’ from bookshops and libraries. In this new India, where the director of cultural transformation champions an agenda to create a Hindu master race, Rehana’s mother’s prison diary—in a curious intersection of art and life, these are Vijaya Lakshmi Pandit’s diary entries from 1942—feels strange, as though it’s from a different world (‘Every now and again shouts of ‘Inquilab Zindabad’ and other slogans come to me from the men’s barrack over the wall. I feel less lonely after that and, in a way, happier’). And, perhaps, most startling of all in this Huxleyesque Brave New India is the completely effaced memory of Nehru and his vision. The first Prime Minister appears very early in Sahgal’s narrative, declaiming in Trafalgar Square in a black sherwani and black Gandhi cap: “Spain was not Spain only but a world locked in death struggle with the barbarian hordes of reaction and brutal violence. Spain and Czechoslovakia represented to me precious values in life. If I deserted them, what would I cherish in India?”

Rehana and her book club friends, sophisticated descendants of Macaulay- putras, attempt to navigate this strange India, suddenly so foreign to them, and amid the self-righteous sweet-tongued right-wingers, the flourishing capitalists and the morosely quipping liberals, Sahgal captures deftly a perfectly apposite Delhi. Sahgal writes: ‘Rehana went toward the beckoning arm near the bar across the room. Gaurav, dean of art critics, greeted her glumly, exchanging his empty glass for a full one. “What’s the matter, Gaurav?”

“The guidelines, what else? No breasts, no buttocks, no pubic hair, no abstract art. The word is holy art, healthy art, national art.” He helped himself dejectedly from a bowl of caviar. They had been given a preview of the entries selected for culture week.

“This too shall pass is what you’re hoping, Rehana? Maybe so. Art might survive but judging by elsewhere, critics don’t.” He signalled a passing waiter. “Meanwhile, there’s caviar. Have some.”’

At this party, Rehana meets the mysterious Muslim intellectual, Zamir, and soon they get tangled in each other’s lives.

The other recurrent character-type in Sahgal’s prose is the idealistic foreign services officer, based partly on her long-time partner EN Mangat Rai (their letters to each other were compiled by Sahgal in a brave and moving volume, simply titled Relationship). In When the Moon Shines by Day, there is the diplomat Kamlesh, an old friend of Rehana, who moonlights as a writer. Kamlesh is researching the Taj Mahal—and the almost absurdly dramatic life of its progenitor, Shah Jahan. As the India of Rehana, her parents, Kamlesh and Zamir becomes more and more unrecognisable, terrible things start to happen.

Sahgal writes: ‘“Rehana, it’s no good being in the line of fire. You could have been killed,” Nandini was speaking urgently for all of them, “As it is, the work you do is so depressing. Why do you have to be involved in things you can do nothing about?”

She didn’t know why unless it was hearing her mother say the unknown, unseen comradeship of other prisoners had kept her going, a hundred thousand of them in that last campaign not counting those who had been fined, flogged, or shot. How could they have borne it without the thought of each other?

“That’s all very well but you mustn’t go on with your work,” her friends insisted, “Why did you get into it in the first place?”

Because people are tortured for refusing to agree the moon shines by day and the sun by night, because there are cells—hells—for the torture known as solitary confinement, because hanging doesn’t break a neck, it cracks it and slowly strangles. And because of what happens up the road and down the corner. All this remained unsaid.’

While Sahgal’s novels have invariably been infused with the same political outlook that influences her non-fiction, When The Moon Shines By Day stands a little distance apart from the drama of her realistic novels (most notably, Rich Like Us and This Time of Morning) where the politics simmers beneath the fractured earth, yet ultimately remains subservient to the stories of individuals, finely drawn characters who power the narrative. Sahgal’s powerful critique of the Emergency never overshadows the story of her two outstanding protagonists, the Cockney- speaking Rose and idealistic bureaucrat Sonali. In When The Moon Shines By Day, however, as the politics takes over the canvas, looming above the colourless people inhabiting its pages, and urgent worthwhile things are said about urgent worthwhile concerns in our post-Padmavati times, paradoxically, something luminous and light that breathes life into art seems to have gone missing from the novel. The narrative feels too upper-class, too political and too distant, for the reader to register more than a political response. You might agree with its grand narrative, but it’s unlikely you will feel deeply for any of its small moments.