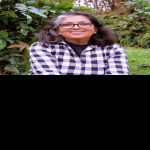 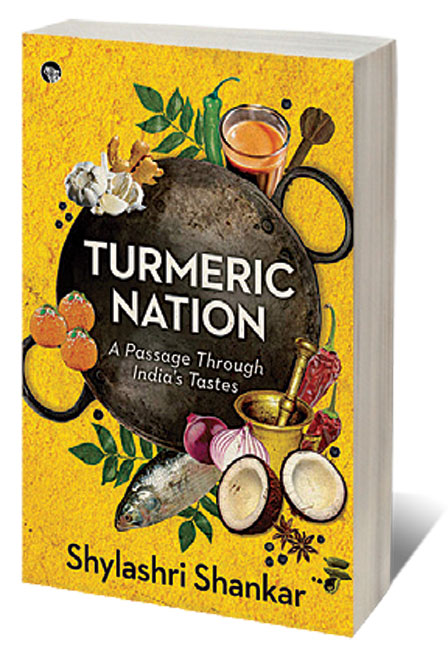 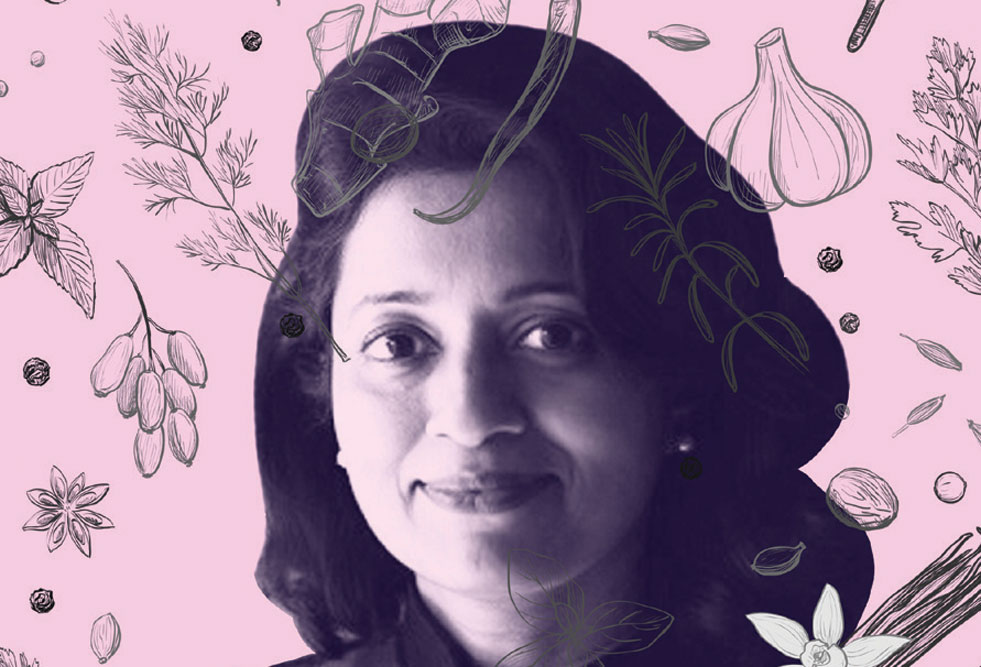 
IT HAS BEEN said that a nation’s culinary history, the traditional foods and recipes of its people must be treasured with as much zeal as its monuments and works of art. Food is an important manifestation of culture, steeped in history and flavoured with every sensory experience: love, loss, greed, poverty, desperation and even nationalism. But how does one begin to unravel and then present a composite culinary identity? Academic writer Shylashri Shankar uses her researcher’s lens to explore the complex evolution of India’s food traditions in her book of food essays: Turmeric Nation, A Passage through India’s Tastes.

Food is a significant conduit for storytelling. And Shankar has plenty, from first foods and last suppers, and the nuances of the Self-Respect movement to her own experiences with fasting. The chapters which come under intriguing titles like ‘Ardor’, ‘Poison’, ‘Attitude’ and ‘Revolutionary Transgressions’ explore the many facets of India’s culinary traditions. The author delves deeper and comes up with fascinating tales of Brahmin bread and burkhewali chai, the politics of coffee drinking and the disparities in the diets of Dalit peasants and Indian royals.

Though the narrative often digresses from the larger theme of discovering Indian tastes, it makes pleasant reading, if each chapter is taken on its own merit. The Pleasures of Eating Alone may have nothing to do with Indian palates but it resonates with my own views on solo dining. The recipes were a big plus, some just for the pleasure of reading (Aphrodisiac recipes from Ni’matmana) and others I could actually attempt. I tried the two pumpkin recipes, one from north India and the other from the south to compare the variations in the use of spices, ingredients and cooking techniques, both uniquely Indian.

Shankar begins each chapter with a question, in her search for a common thread. But is there an Indian culinary identity, other than the ‘curry’ bestowed on us by the British, or as a nation of spices mostly imported from distant lands? India’s present food culture is heavily influenced by two major historical events: the arrival of the Portuguese in 1498 which brought a wealth of new crops and almost half a century later, the Mughals who introduced sophisticated cooking techniques. But there is another factor—poverty, which determines how most Indians eat. Perhaps, the author says, the links lie in ‘mosaic bundling’, the unique mix of genes, experiences, history and geography that define who we are. In an attempt to find this connection and bind the vast and diverse palates of the country, the author picks turmeric, a pan-Indian spice of ancient lineage. The presence and absence of this ubiquitous Indian spice is highlighted in the story of India’s Dalits, and these are some of the most poignant sections in the book.

In the Introduction, Shankar states that the narrative is non-linear and can be read randomly. Each chapter is standalone and peppered with personal observations and anecdotes that are witty and engaging. However, it moves at a feverish pace in some parts while it drags in others where the narrative is stretched with irrelevant trivia, notably the constant references to international food trends.

This does not diminish the value of an exhaustively researched book but only leaves the reader wondering why it wasn’t tightened up at the editor’s desk. Turmeric Nation also falls short as a comprehensive look at the nation’s tastes —as there is little on the cuisines of the Northeastern states of India and excessive focus on south Indian foods.

Perhaps Indian food cannot be defined or explained in conventional terms, but Shankar provides plenty of food for thought. It is not the watered down versions of extravagant royal cuisines or even the wonderful diversity of street foods that characterise Indian palates. While grinding poverty and limited food choices are universal in determining the dietary habits of the poor, it may be India’s history of caste lines and oppression and exclusion that define our own uniquely ‘Indian’ culinary identity.