Getting lost in fractured landscapes 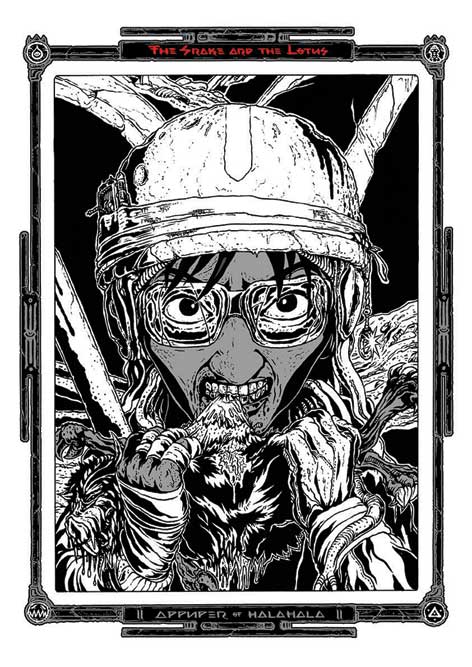 THE ITALIAN ARTIST Piranesi hit the big time in the 18th century with his etchings of Rome. His engravings of the Colosseum and other tourist traps were lapped up by the paying public. Just as his career was peaking, he started a new product line. And spent five years drawing prisons. Imaginary prisons. Impossible prisons. Labyrinthine, immense, utterly imaginary prisons.

These ‘whimsical aggregates’ also find expression in The Snake and the Lotus, a new graphic novel by Appupen (the nom de plume of George Mathen). However, Appupen’s world is driven by something far darker than architectural whim-wham. For more than a decade, he has been patiently building brick by brick, panel by panel, his own world of Halahala (named after the poison that Lord Shiva consumes, an unfortunate pharmaceutical byproduct of the Deva-Asura struggles).

There are some novelties in this latest instalment—his silent, no-speech-bubble approach has been replaced by brief text for each page, and more importantly, Appupen eschews the normal multiple panel set up for one image per page.

These huge panels lead to a certain loss of fluidity, making the comic more static, but also more monumental. The eye wanders in page-wide mazes of details and masses of sumptuous black.

The story or the narrative is not particularly substantive. ‘In the Grey of the wastelands, giant towers house machines that keep a diminished, diminutive human race alive on lotus milk. If humans and machines continue unchecked in their ways, nature—existence itself—will be under siege.’

In short, Humanity has retreated into a final redoubt—the ‘White City’. There, subsisting on the milk of a mutated lotus plant, and divided into the ruling ‘Godling’ and underclass of ‘Greys’, they eke out their final hours as the planet spins itself into oblivion.

Appupen had shown me some of the pages when I interviewed him about his previous work, nearly half a decade ago. I distinctly remember the White City looking like an unholy marriage between the Lotus Temple in Delhi and the Sydney Opera House. Hand-drawn over years, the form itself is a protest in this age of digital shortcuts.

‘White City’ is the ultimate ‘gated community’ in this ruin-strewn wasteland. This idea of a last redoubt has fascinated the science-fiction imagination since the genre began; so have speculations on how class warfare would play out in the future. For instance, the vertical hierarchies in Fritz Lang’s Metropolis or HG Wells’ The Time Machine with its Morlocks and Eloi.

This lode has been mined (too thoroughly), one might say, but more than the narrative, it is the pervasive atmosphere that Appupen sets up. From the opening in these batrachian wastelands, Appupen traffics in every shade of darkness there is, his characters adrift amidst a vista of fractured landscapes, fractured ideologies.

This volume bears testament to his private obsessions, including loss of contact with nature and the atomisation of the individual. Underlying this is a fascinated horror with biomechanoid speculation— living beings turning into machines.

These meldings of flesh and metal have been explored by artists like David Cronenberg in film and HR Giger in art. This thread in the artistic imagination spans the centuries, all the way from Piranesi’s prisons with their impossible, confining geometries.

In the end, the only ideology left is to consume. In Appupen’s Halahala, even the moon is shattered, half-eaten.

Everything consumes and, in turn, is consumed.