Three years after his Nobel victory, Orhan Pamuk shows the prize was no retirement award with a fine novel about love and memories 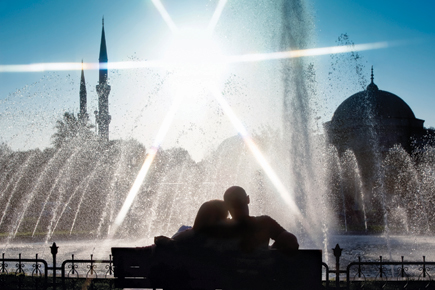 Three years after his Nobel Prize, Orhan Pamuk shows the prize was no retirement award with a fine novel about love and memories.


A cigarette butt stubbed out in anger after an argument, an earring that fell off in the throes of lovemaking, a frayed pack of cards: objects on display in Orhan Pamuk’s Museum of Innocence. Each such object imbued with the memories of a tortured love in a narrative where Pamuk is the guide on a leisurely but haunting tour through the museum. Pamuk the author who is also Kemal the protagonist, pursuing his love in a world where several possibilities come alive because of all that is left unsaid. A world brought into existence between the explicitness of affirmation and denial.

At 30, Kemal is the son of a well-to-do businessman in Istanbul, about to be engaged to the beautiful Sibal, a bride as suitable in his eyes as she is in the eyes of his family and friends, the secular elite of the country. A chance encounter with Fusun, a young woman just turned 18 who is a distant relative through marriage from a family fallen on bad times, leads him to pursue a love affair which he hopes to conduct with the same discretion that his father had brought to such affairs. Fusun though is a woman who will not be complicit in this easy arrangement, she disappears along with her family. When Kemal, unable to sustain his own life with Sibel, finds her again, she is married. What began as a love story proceeds as the courtship of a married woman, possible only because the acknowledgement of this forbidden love is shrouded in silence.

But if this is the story of Kemal’s love for Fusun, it is also the story of Pamuk’s love for Istanbul. At the very end where Pamuk the author speaks directly to the reader, he notes this book was written between 2001 and 2002 and then between 2003 and 2008. In the course of the writing of this book, Pamuk also published Istanbul: Memories and the City. It makes sense to read the two books together. In Istanbul… Pamuk speaks of huzun, the Turkish word for a melancholy which is the shared expression of a community rather than the mood of an individual. Huzun, he says, ‘teaches endurance in times of poverty and deprivation, it also encourages us to read life and the history of the city in reverse’. The Museum of Innocence is both a life and the history of the city in reverse.

It is a history easily recognisable in India—of a time when there was just one state run TV channel, of a time when every movie made by a fecund film industry was the same movie, of the stratagems required to bypass the censors, of a conception of love founded on the absence of the beloved, of a time when the country was proud of a cola of its own. There are occasions when the tour, like a tour through any museum, is a test of the reader’s enthusiasm, when the unending stream of exhibits on display imposes its own burden of boredom. There is also a certain inevitability to where the love story is headed, prefigured by the melancholy of the narrative, but even so, how many books can evoke a love story, a city and the mood of a people, the magic of objects and a collector’s obsession, and yet make the reader see his own world in new ways? Very few better books are going to come our way anytime soon.