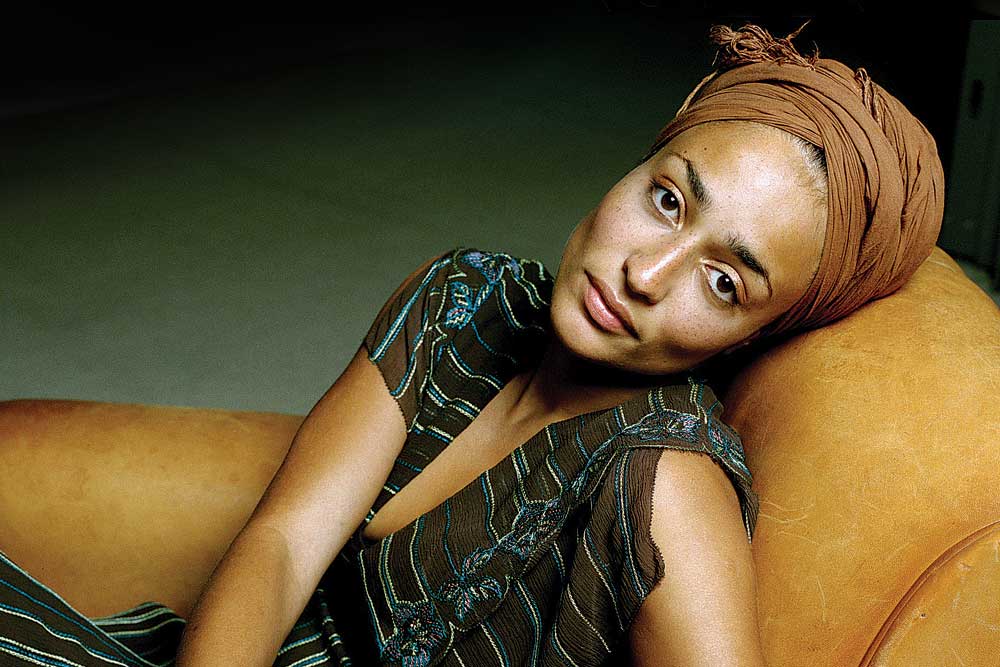 ‘IN MY MIND, her struggles were over. She was a dancer: she’d found her tribe. I, meanwhile, was caught completely unawares by adolescence, still humming Gershwin songs at the back of the classroom as the friendship rings began to form and harden around me, defined by colour, class, money, postcode, nation, music, drugs, politics, sports, aspirations, languages, sexualities… In that huge game of musical chairs I turned round one day and found I had no place to sit.’

What is adolescence if not an attempt to find a tribe to belong to? What is loneliness if not realising that no one has kept a chair for you? While we’d like to imagine that children make friends on a whim, we know the truth is far more complicated. Even for pre-teens and teenagers, friendships congeal around ‘adult’ issues—colour, class and money. Zadie Smith’s latest novel, Swing Time, soars when it traces the contours of friendship between two girls (Tracey and an unnamed narrator who is the voice of the passage above). The novel is pitch-perfect when it fleshes out mother-daughter relationships, and the changing tides between parents and children, but it misses a beat when it attempts to create the tumult of celebrity in today’s age and stumbles when it reaches Africa.

Zadie Smith, 41, born to a Jamaican mother and an English father, is one of the most celebrated writers today. When her first novel White Teeth hit stands in 2000, Smith was still a 24-year-old Cambridge undergraduate. Set across continents and spanning 150 years, the book was hailed as a masterpiece. Her literary gameplay prompted critics to draw comparisons between her and Salman Rushdie, who himself called the work ‘an astonishingly assured debut’. But the question on everyone’s mind at that time was: is Smith a one-book fluke?

Over the last two decades, she has proven that she isn’t. If White Teeth— which won the Guardian First Book Award—was hailed for its ‘hybrid of voices, tones and textures,’ her following novel The Autograph Man (2002) delved into the world of cinema, celebrity and that elusive phenomenon called fame. While it was appreciated, it did not receive the same acclaim as White Teeth. Renowned book critic James Wood ripped The Autograph Man apart for its ‘cartoonishness and excess, the misplaced ironies and grinning complicities,’ even while conceding that Smith is capable of crafting the marvellous sentence. NW, which came out a decade later, was hailed as ‘that rare thing, a book that is radical and passionate and real’.

While her novels brought her attention, her commentary in magazines proved she was a prescient voice to reckon with. In Changing My Mind: Occasional Essays (2009) , Smith rises adroitly to the task of reviewing some of her favourite books, such as Zora Neale Hurston’s Their Eyes Were Watching God. Smith doesn’t merely detail the good and weak parts of a book. Instead she tells us how these stories affect her. She recounts her experience of reading Their Eyes as a 14-year-old, ‘I inhaled that book. Three hours later I was finished and crying a lot, for reasons that both were, and were not, to do with the tragic finale.’

In Swing Time, Smith once again explores themes that she has visited and unpacked in the past in her fiction—cultural identity and belonging, arts and celebrity. While reading it, you will turn to videos of Fred Astaire and Ginger Rogers, not only because of the eponymous title, but because tap dance forms the tempo and jazz the background score of this novel (at least in the stronger parts).

The girls here are aspiring dancers. But while flatfeet limits the prospects of the narrator, her friend Tracey fares well in modern, ballet and tap. The essential disconnect between the hopes of youth and the realities of adulthood is the most poignant part of the novel.

The prologue of the book opens with the line that screams ‘Millennials’—‘It was the first day of my humiliation’. Shame, of course, is not a new-age emotion, but in our networked times it has become an act. It has become a theatre where the mob plays the role of judge, jury and executioner. Moving from the 80s to the present, the novel cleverly reveals the tightening stranglehold of technology on our lives. While the online world holds us in its thrall, it is also a medium where its brightness ‘putters to ash’ in the matter of hours.

The novel also shows how adults choose to believe childhood is ‘innocent’, when it never really is. Every parent must asks their child, ‘What happened at school?’ And seldom, if ever, told the truth

Even while she has been forced to go offline for 72 hours (a modern punishment if there ever was), has lost her job (which she’s had a decade), her privacy, and way of life, watching Fred Astaire in Swing Time elevates her spirits. Like anyone who has watched Astaire in Bojangles of Harlem, the extended solo in the 1936 film Swing Time, the narrator too overlooks Astaire’s blackface and wonders instead if the large figures in the background are Astaire’s shadow or three other dancers. Watching him, she feels a ‘wonderful lightness’ in her body, a ‘ridiculous happiness’ that seemed to come from nowhere. She echoes Roger Ebert’s comment on the genius of Astaire: ‘What Fred and Ginger had together, and what no other team has ever had in the same way, was a joy of performance. They were so good, and they knew they were so good, that they danced in celebration of their gifts… It is a victory for the human side, over the enemies of clumsiness, timidity and exhaustion.’ The narrator’s love for dance shows us that the triumph of the art form is that it rises above the quotidian and the messy.

The prologue opens in the present, but the first chapter takes the reader to 1982 and the day the two girls first meet. It is camaraderie at first sight. Their shades of brown are exactly the same— ‘as if one piece of tan material had been cut to make us both’. In her essay ‘Their Eyes Were Watching God: What Does Soulful Mean?’ Smith writes about the importance of finding forms of identifications as a reader and writer of colour. She says, ‘At fourteen I couldn’t find words (or words I like) for the marvellous feeling of recognition that came with these characters who had my hair, my eyes, my skin, even the ancestors of the rhythm of my speech.’ Both girls are from the ‘estates’ and neither receive ‘benefits,’ but they notice each other immediately because they look similar.

If the girls have a common love for dance, their mothers share nothing. Tracey is her mother’s aspiration and only joy. The narrator’s mother is a feminist, who merely tolerates her daughter’s love for dance.

All friendships, all relationships between two people work on power, a clout that shifts and mutates. The relationship between Tracey and the narrator violently grows and shrinks from ages seven to their thirties. Swing Time illustrates the effect of time and vodka on any friendship, and reveals the trespasses that are forgivable and those that are not. What is unpardonable is if a friend ruins a parent for you.

The opening chapters on childhood are short and concise, each revealing the agonies and cruelties, the joys and triumphs of this time. To be a child is just to feel ‘more’—sadder, happier, and lonelier; emotions are magnified, nothing is in moderation.

The novel also shows how adults choose to believe childhood is ‘innocent’, when it never really is. Every parent asks their child, ‘What happened at school?’ And are seldom, if ever, told the truth. The narrator recalls her summer as a nine- year-old: ‘I thought of [my parents] at this point as two children, more innocent than me, who it was my responsibility to protect from the kind of uncomfortable facts that they would either over-think (my mother) or over-feel (my father). That summer the problem became acute because the true answer to ‘How was school today?’ was ‘There is a mania in the playground for grabbing vaginas.’ School for the narrator, as she says, is pain. Of course, her parents do not know.

If Smith gets friendship right, she also throws light on the mother-daughter dynamics. The narrator asks, ‘What do we want from our mothers when we are children? Complete submission… And if she doesn’t do it, then it’s really a war, and it was a war between my mother and me. Only as an adult did I come to truly admire her… for all that she had done to claw some space in this world for herself.’

The narrator’s mother isn’t merely fantasising about an escape route from motherhood, but is digging herself a tunnel to ‘freedom’. She is intellectually and politically different from the other mothers (those who come to pick up their children from school) because she knows no one is going to keep a chair for her. And she doesn’t care.

Here is a wonderful line on the mother’s battles: ‘I don’t mean that my mother didn’t love me but she was not a domestic person: her life was in her mind. The fundamental skill of all mothers—the management of time—was beyond her. She measured time in pages. Half an hour, to her, meant ten pages read…’

While the growing-up sections will have readers highlighting and returning to it, the exposition on Aimee (the Australia-born superstar singer and the narrator’s boss) is laborious. She is a character who never becomes a person, ‘half Peter Pan, half Alice’, she remains more mythic than real. Pages are dedicated to her, but all you will remember is that she is a diva with tantrums. This section of the book drags, especially in contrast to the sparkling childhood bits.

Aimee’s first line to the narrator: ‘Everything coming out of your mouth right now is totally worthless to me,’ sounds so Gordon Ramsay that you want to change the channel. Her lines such as ‘In this life… you’ve got to know what you want. You have to visualise it, and then you have to pull it down,’ bore on the page. As a reader it is impossible to conjure her. Why is she so big? Why is she so famous? We see her only as the narrator does—‘a person for whom I scheduled abortions, hired dog walkers, ordered flowers, wrote Mother’s Day cards, applied creams, administered injections, squeezed spots, wiped very occasional breakup tears and so on. Most days I wouldn’t have known I worked for a performer.’

Therein lies the problem. The reader cannot picture the performer in Aimee. Here is a novel that so wondrously evokes dance, then why is the performer at the centre of it so page-three? The narrator dedicates 10 years of her life to her, but why? What is the big fuss around Aimee?

If only Smith had kept her eyes riveted on the two central characters—the narrator and Tracey—just as the camera stays steadfast on Astaire and Rogers in Swing Time, without getting distracted by anything else. In a bid for drama, Smith loses the rhythm.