This Pakistani cricketer-turned-politician has always been the paparazzi’s delight. In this biography, Sandford follows a similar path instead of trying to unravel the enigma called Imran Khan. 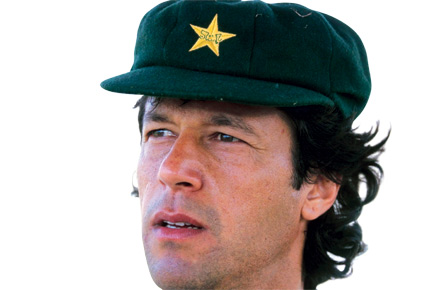 Imran Khan has always been the paparazzi’s delight. In this biography, Sandford follows a similar path.


Imran Khan has always been the paparazzi’s delight. In this biography, Sandford follows a similar path.

Imran Khan has always been the paparazzi’s delight. In this biography, Sandford follows a similar path.

Imran Khan should rank among the most colourful characters to have played international cricket. His romantic escapades, charismatic personality and, above all, primal talent with both bat and ball have resulted in much debate over whether he is the best all-rounder and also the best captain to have played the game. Since turning politician, his life has never had a dull moment, making him the perfect candidate for an enthralling biography.

Despite having all the necessary ingredients, though, Christopher Sandford fails to cook a gourmet meal. The book is interesting only in sections and the attempts to portray Imran as a playboy appear forced right through the book. The author takes great care to remind us that a comprehensive list of Imran’s ladies is almost impossible to compile. Even when he describes one of Imran’s better known affairs, he does little to bring to life the real Imran, the person behind the enigmatic facade.

Attempts to link Imran with Benazir are a stretch, inserted to satisfy the needs of the market and make headlines in the tabloid press. With the author himself making the point that there is little evidence to justify the contention that Benazir and Imran were more than acquaintances in Oxford, it is difficult to fathom why Sanford writes, ‘In any event it seems fairly clear that, for at least a month or two, the couple were close. There was a lot of giggling and blushing whenever they appeared together in public. It also seems fair to say that their relationship was ‘sexual’ in the sense that it could only have existed between a man and a woman.’ Speculation that Imran’s mother wanted the two married off has little basis in fact and only contributes to exposing the author as part of a publicity hungry paparazzi.

Where the book scores are the sections where Sandford delves deep into trying to explain what it meant for Imran to play India. That he never lost a Test against India as skipper remains the high point of his captaincy. When the two countries resumed playing each other after a hiatus of 17 years in 1978, the series was far from friendly. It is of great interest to note that to one Karachi publication, the visiting Indians were ‘unholy’ and ‘to be humiliated, [rather] than beaten’. Sandford is spot on in suggesting that the newspaper’s description of Hindu players as infidels draws attention to the flavour of the coverage. The Pakistan Star had gone a step further in suggesting, ‘Know your enemy for what he is’. That the pressure was too much to handle is evident from Imran’s telling comment, “I found it impossible to control my line, or length, or movement. With each wayward over, the accusing looks from my teammates intensified. Fortunately, a bad ball got a wicket, which made me relax and bowl better.” The symbolism of Pakistan’s victory was such that the premier, General Zia, proclaimed the next day as a public feast.

The other standout section of the book is the one detailing the highest point of Imran’s cricketing career, the 1992 World Cup triumph. That he never said a word about his teammates following the victory, resulting in serious dissension within the team, sums up the true reality of Pakistan cricket—a bunch of super talented players who, more often than not, are liable to self-destruct. His self-absorbed nature doesn’t, however, take away from his unrivalled ability to mould Pakistan into a world beating unit, and his ability at age 38 to bat like a true champion in the most trying of circumstances. Such acts of genius, followed by statements like, “By winning the World Cup, personally it means that one of the greatest obsessions in life, which is to build a cancer hospital… I’m sure that this event will go a long way towards completion of this obsession”, makes Imran the personality that he is, an enigma almost impossible to unravel.

His fights with Botham and Lamb over ball tampering, his rather insignificant early career and his ongoing career as a politician could all have been better developed by Sandford. Less on inconsequential county games and more on these issues would have made Imran Khan: The Cricketer, The Celebrity, The Politician a much better book.

Boria Majumdar is a sports historian and cricket commentator