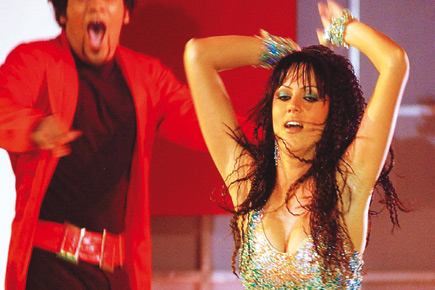 
Barring feature films, advertisements, stage shows, ribbon cuttings, actors have very few ways of earning a decent living. That chang­es on New Year’s Eve, when blowout bash per­formances offer a dependable earning oppor­tunity that employs everyone from Akshay Kumar to Yana Gupta, whose asking price has reportedly risen to Rs 1 crore  since she was photographed in plain view at a recent Mumbai charity event sans her panties.

For doing their thing on stage for anywhere from ten minutes to an hour, actors, enter­tainers, and sportsmen are paid anywhere from Rs 5 lakh to a few crore. They perform at hotels across the country, and sometimes in other countries.

Being in the news, no matter where an en­tertainer stands in the Indian film hierarchy, generally pays well. The popularity of Munni Badnaam Hui, for instance, pushed item girl Malaika Arora Khan straight to the top of the New Year’s earnings chart. To show up at a Sahara event with her husband and brother-in-law, she will be paid Rs 2.5-3 crore for two performances.

Last year, Bipasha Basu made news for de­manding Rs 2 crore from Sahara for her per­formance. She has yet to confirm a perform­ance this year.
One news report quoted a source as saying some actors charge Rs 3 crore per hour. The same report adds, ‘Daler Mehndi will sing for Rs 37 lakh, Mika for Rs 27 lakh, Rahul Vaidya for Rs 10 lakh’.

One of the many mistakes folks make when assessing the Bollywood price list is taking it as an accurate measure of value. Priyanka Chopra’s “rate per show” is Rs 45 lakh—only 5 lakh more than Vivek Oberoi’s. This is not just difficult to comprehend, it’s impossible.