Badri Narayan’s book throws new light on the RSS. The author tells Rahul Pandita how the organisation is trying to inculcate a vision of modernity coupled with traditional wisdom 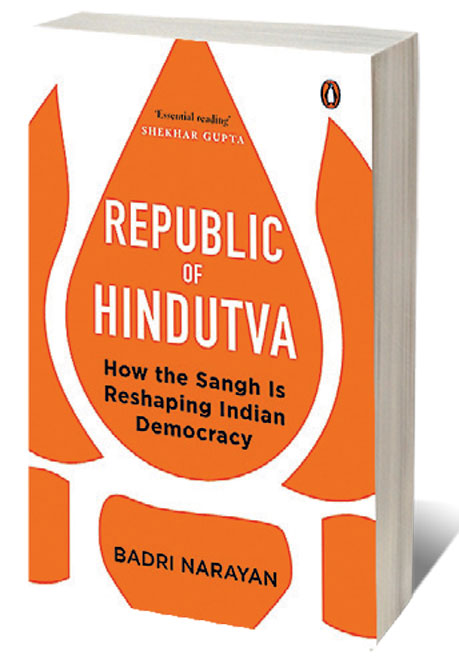 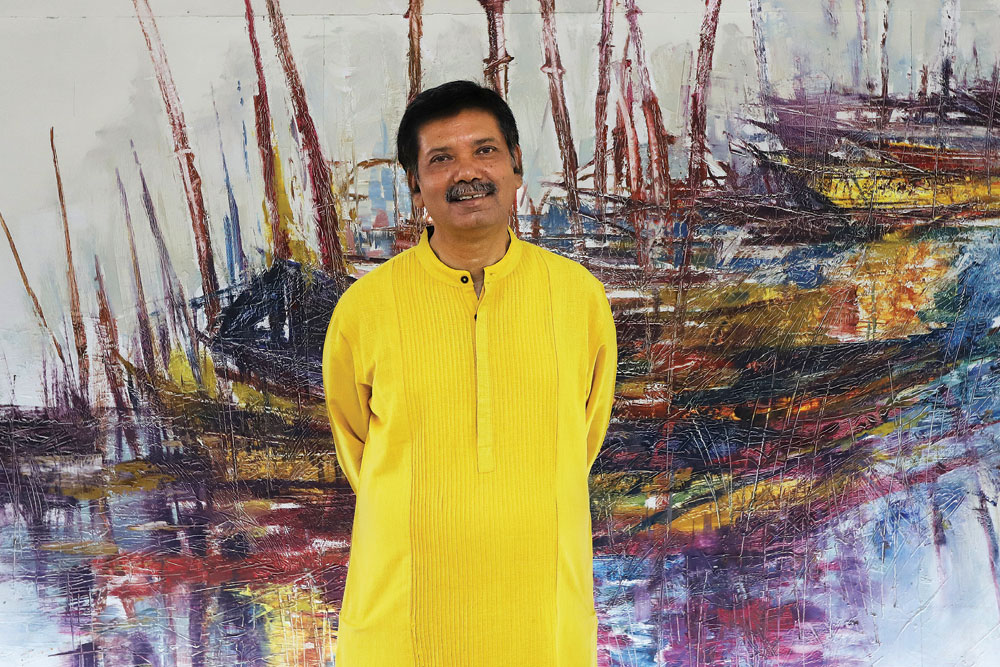 
DURING HIS RECENT Bangladesh trip, Prime Minister Narendra Modi said that while doing a Satyagraha in 1971 for Bangladesh’s freedom, he and his colleagues (in the Rashtriya Swayamsevak Sangh, or RSS, of which he was a worker then) had courted arrest. This statement immediately met with a flurry of responses from many on social media. Terming it as a lie, Modi’s critics said that it couldn’t have been possible. Many responded by putting up memes, showing Modi’s presence at historical events where it couldn’t have been possible. Someone, for example, put up one of the landmark photos of the Chipko Movement in Uttarakhand in 1973, showing four women standing against a tree to save it from felling. The meme read: “I was on the other side of the tree.”

Later, evidence poured in of such arrests indeed happening.

The point is not that Modi or his Government is incapable of lying or spinning facts to suit a certain political narrative; the point is that some are too quick to dismiss things pertaining to the BJP Government without the application of basic scholarship. There is no attempt to make an honest enquiry into why, despite issues like demonetisation and the handling of the migrant crisis during the lockdown, Modi continues to be extremely popular.

In his new book, Republic of Hindutva: How the Sangh Is Reshaping Indian Democracy (Penguin; 240 pages; Rs499), scholar Badri Narayan has tried to go beyond what he calls the “Left-invented image of the RSS” to understand how the Sangh Parivar (consisting of RSS and other allied Hindu organisations) is reshaping Indian democracy.

Narayan makes clear that he does not belong to the school of thought which believes that Modi makes his political strategies independent of the RSS and that during his tenure as Gujarat chief minister he made the organisation ineffective. He argues that RSS is giving unconditional support to Modi.

But is it because in 2014 RSS felt that Modi was their only chance to come to power? “We must understand that the RSS is not a fundamentalist organisation in that it follows, say, five or six fundamentals,” he says. “It is an organisation that has always left open scope for evolving. To bind with itself opposing forces remains the RSS’s biggest strength.”

RSS, Narayan says, felt that Modi was offering something perceptibly different from leaders like LK Advani or Shivraj Singh Chouhan. That is how, he says, they put their weight behind him.

This formula has worked, Narayan says, because from the early 1990s, RSS has changed itself in response to new social complexities arising out of phenomena like liberalisation. “This evolving is not new. But it has become quite rapid in the last decade or so, especially since Modi came to power in 2014,” says Narayan.
This change, Narayan feels, is a combination of understanding what people in villages and towns wanted beyond the echo chambers of Delhi and Mumbai, and exposure to ideas from outside in response to what he terms “aggressive modernity”. “On the one hand, you have the discourse of Swami Vivekananda and Sri Aurobindo with the wisdom of working on local things like crafts or water resources. And you also have risen to the baits of uncomfortable things such as the issue of homosexuality or the transgender,” he says.

The understanding of local issues needs an ear to the ground, of which RSS has ample. It has a vast network of workers present at every level—from silently taking inputs from people to booth management during election time. Many of the workers and leaders are adept at handling modern challenges like the use of technology. “Some among us still have the old image of an RSS worker in mind, the typical tilak dhaari man. But it has all undergone a drastic change,” says Narayan.

Why are the opposition parties unable to realise this change and devise counter measures? The problem, Narayan says, is that these parties want to fight BJP which they think is an organisation like them. But the “womb of the power of Hindutva politics”, he says, is RSS, of which these parties have no understanding. “They are still fighting it with the old language, with the old understanding of Brahmanism and communalism. It is like fighting the shadow of an elephant long after it has gone,” Narayan says.

Narayan gives the example of RSS keeping in tune with Dalit aspiration. This tuning reflects in the 2019 Lok Sabha elections, for example, where more than one-third (34 per cent) of the Dalits voted for BJP as compared to around one-fourth (24 per cent) in 2014 (according to a post-poll survey conducted by Lokniti-Centre for the Study of Developing Societies).

This shift—as several inputs from states like Uttar Pradesh (UP) have repeatedly indicated—is because among the Dalit community there has been a massive churning, which the opposition parties have made no attempt to read. “See, the young Dalit today is very different from the Dalit who knew Kanshi Ram (the prominent Dalit leader and founder of the Bahujan Samaj Party). He wants different things,” Narayan says.

The Left and other centrist parties, says Narayan, cannot think beyond socio-economic equality. Here RSS has scored among the Dalit community by offering it an identity through inclusion in the broader Hindutva umbrella.

While visiting a village in UP’s Bundelkhand area in 2017, Narayan writes that he and his researchers met an RSS activist who was urging the members of the marginalised Kabutara community to construct a temple to their village deity, which till then was being worshipped as a small mound under a tree. Community members told him that they manage to make their ends meet, but wanted a space where they could convey their suffering to god. “A temple deity also means visibility and a share in the public sphere for the community,” Narayan says.

Since the work among marginalised communities by RSS has increased, the participation of workers among these communities has increased as well. “It is not a claimed shift, but one can see it on the ground,” says Narayan.

The opposition parties will have to learn this, says Narayan. “Mere political language has no meaning. You have to bring a social sentiment in your narrative,” he says.

The Modi Government and RSS understand this well. Last month, Modi laid the foundation stone for a museum and tourist complex in UP’s Bahraich, which is dedicated to a medieval hero of the region, Maharaja Suheldev. On the same day, the UP government celebrated the birth anniversary of Suheldev, whom the Rajbhars, a prominent OBC community in the state, revere. On March 28th, UP Chief Minister Yogi Adityanath unveiled a statue of Rajput warrior Maharana Pratap and laid the foundation of projects over Rs300 crore in Bahraich. In a similar fashion, Modi had earlier made a reference to Mari Mai, a figure worshipped in folk culture in eastern and central UP. “The Congress wouldn’t even know of the existence of such figures,” says Narayan. The fight, he says, is becoming difficult for the opposition. “You attack Ram temple, they bring Mari Mai. You attack that, they will bring Shabari (a tribal woman in the Ramayana),” says Narayan.

Not only Dalits, RSS, Narayan writes, wants to take everyone it can in its Samagra Hindutva (inclusive Hindutva) fold. This includes OBCs like the Rajbhars or even some sections of Muslims. For this, writes Narayan, ‘They [RSS] claim that Muslims are those Hindus who converted during the medieval period under the compulsion of Muslim rulers. Thus they should now (re)unite with the Hindus in Hindu society.’ It is under this tactic that RSS chief Mohan Bhagwat said that the Sangh considered all residents of India, whichever religion or culture they belong to, Hindus.

RSS has created a winnable potion of service along with politics that is fetching gains for BJP. This, as time and again has been established, comes with a certain commitment and patience. The opposition parties, especially Congress, lack this. “Priyanka Gandhi goes to a village, speaks to few people, maybe helps them. Individually, you have made an influence there. But there is no community influence. To build that, there has to be a follow-up, which in Congress’ case there is none of,” says Narayan. People, he argues, now want a different commitment from leaders. “They want their presence among them, which goes beyond election time,” he says.

The Sangh Parivar manages to be omnipresent in the lives of people. It constantly works among the community, as Narayan points out. It could be through something like a Ram Katha, which becomes a platform for its leaders to interact with people and use a social language with a political idiom.

Narayan perceives the recent rise of RSS leader Dattatreya Hosabale as an indicator of change within the organisation. “For me, it is a reflection of the same thing RSS is trying to inculcate: a vision of modernity coupled with traditional wisdom,” he says.

In this Sangh Parivar juggernaut then, what about new Dalit voices like Bhim Army’s Chandrashekhar Azad? “He began with an idiom much like the Dalit Panthers’, a language of warring. From there, he has gone to a rights-based language,” observes Narayan. But he feels that to succeed in Dalit politics, Azad needs a Kanshi Ram-like language. “Right now he is into ‘I am giving you this or that,’ which is patronising and won’t work beyond a point. Kanshi Ram never did that,” says Narayan.

In the beginning of the book, Narayan traces his own journey as a young schoolboy in Bihar, who started going to an RSS shakha. Around the same time, he also became active in a leftist writers’ group. This, as Narayan writes, led to “a stereotypical image of the RSS” in his mind. After spending 30 years with this image, a scholar tells him that if he were him, he might have joined RSS and tried to write an insider’s account. But by this time, it was too late for Narayan. Given that the political discourse among scholars and intellectuals is sadly divided into tight binaries of Left and Right, Narayan cautions that his book should be read as an intellectual exercise to understand and record social changes that have happened in this country.