A graphic travelogue takes on the fading footsteps of the Buddha in India, with some difficulty 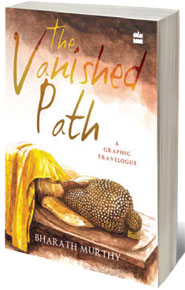 You might find the experience of reading a comic book structured around Buddhism somewhat odd; like watching a rock opera based on the Stoics. But Bharath Murthy’s graphic travelogue, The Vanished Path, advances the perspective of ‘a lay Buddhist’, someone who is just getting to know the teachings of the Buddha and relishes in passing them on. This is where the simplicity of the graphic panel— its literal and unobtrusive presence—comes in handy.

Murthy, through his protagonists, named Bharath and Alka, takes us on a Buddhist pilgrimage in this book, presenting what the couple saw and experienced on their expedition by means of his draughtsmanship. His primary aim is to capture the historical significance of places like Sarnath, Nalanda and Lumbini among others— places central to the Buddhist mythos, which have lost their past glory and high stature, and are kept alive today mainly to serve the interests of the tourism ministry. Yet we also see the couple lounging in cheap but overpriced hotel rooms, talking to tourist guides and taking train or rickshaw rides from one place to the other. We even hear the trains that go ‘TAGA TAGA TAGA’, and the rickshaws going, ‘SRR SRR’.

The graphic novel came of age years ago. Yet there is something inherently juvenile about it (which is not entirely a bad thing; the most radical experiments in the arts have all been juvenile in nature, in that they were meant to irritate grown-ups. Were movements like Dada not self-avowedly and proudly puerile?).

But when ‘comics’, as we knew them in our childhood, underwent a makeover and came to be identified by the illustrious tag of the ‘graphic novel’, they entered a very treacherous formal terrain. Depending on your standpoint, a graphic novel may seem to be the future of art or the best oxymoron coined by the human race. And the graphic travelogue may be a distant cousin of the graphic novel, but the same critical standards—those applicable to the literary and visual arts—must apply. And it is as literature that The Vanished Path fails to measure up. The characters, though they are there on the page for all to see, fully realised through visual detail, seem flat, scarcely better than cardboard cut-outs. When Bharath and Alka talk, they sound like Wikipedia entries. Sample this stretch of dialogue:

‘“When did you say Xuanzang came to India?”

“The Prophet Mohammed died in 632 CE. Xuanzang lived during the beginning of Islam.”

“Oh ya! That’s a strange coincidence.”’

What bogs down this book, in fact, is its challenging central conceit: Buddhism. Much has been said and written about Buddhism, and by some of the most daunting figures in the history of human learning, not least among them the Buddha himself. Both Schopenhauer and Nietzsche, for instance, were intrigued by Buddhism and added to the corpus of ideas surrounding it. Pankaj Mishra’s fine book An End to Suffering—which, too, is a travelogue of sorts centred on Buddhism—is well-regarded partly because Mishra was able to bring out the complexity of his subject through wide reading and patient reflection, none of which can be said of Murthy’s book.

The most memorable chapters in An End to Suffering are about the Buddha’s early life. Here, the ancient sage is depicted as a 29-year-old man struggling to come to terms with a world full of suffering. Mishra writes: ‘His penances became more severe…He went to sleep in a cemetery, lying on a skeleton.’

Now there’s material fit for a comic strip. But Murthy only briefly touches upon this phase of the Buddha’s life, a phase which I find the more interesting as it demarcates the line between Buddhism as philosophy and Buddhism as religion. This was when the Buddha was only young Siddhartha, and yet to become ‘the Tathagata’, an enlightened sage. His spirit of enquiry was still alive.

For all its flaws, though, The Vanished Path is not uncritical of those who have, so to speak, poured all the teachings of Buddhism and the religio-philosophical ideologies surrounding it into ‘one big spiritual dish’. It also considers quite seriously the diminished standing of Buddhism in India—which is why the book begins with the death of the Buddha and is called The Vanished Path. But if the book had supplied us with more stories, sketches and ambient noise (‘Darrr’, goes an Ambassador car), and less history lessons, it would have turned out to be a superior achievement—and I would have flipped through it again.