In his latest book, Imtiaz Gul gives a view of Al-Qaeda from within Pakistan. He speaks of tension within the terror group, and how India bungled a chance for peace in Kashmir 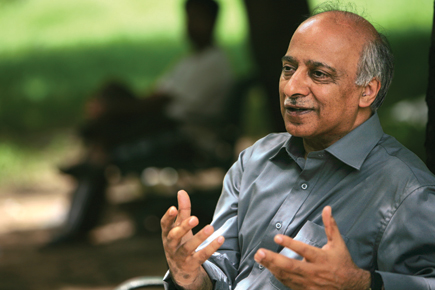 In his latest book, Imtiaz Gul gives a view of Al-Qaeda from within Pakistan. He speaks of tension within the terror group, and how India bungled a chance for peace in Kashmir


Q ‘Al Qaeda Connection’ details the roles Pakistan, Afghanistan and the US have played in the context of conflict. Do you think China has had a role to play in terrorism in the region bordering Afghanistan and Pakistan?

A No. China has been a good friend of Pakistan’s, in the classical sense of international diplomacy—informed neutrality. It has maintained neutrality, but the case of some Chinese Uighur Muslims and their participation in the war on terror has opened its eyes.

Q How do you explain the fact that anti-US sentiment unites even warring Muslim tribes in the region bordering Afghanistan and Pakistan?

A The short answer is ideological brainwashing. The long answer is the socio-economic conditions prevailing in the area. It’s the poverty there that has been exploited. There is also a class element to the war the Taliban is fighting. For the poor, fighting the war, under the influence of radical Islam, is a way of ensuring their families are fed. In a very tragic way, the war on terror has provided a mode of social upliftment. It’s also a reason why we now see Uzbeks and even Chechens as part of Al-Qaeda.

Q Your book begins with the Kaloosha Operation of March 2004, where the Pakistani army tried to destroy Uzbek Taliban leader Tahir Yuldashev. Was this the first acknowledgment of newer ethnic additions to Al-Qaeda’s minions?

A Yes. But that operation also reflects the internal tensions within Al-Qaeda. They might be united in their cause against the West, but tribal affinities are thick. In this case, it’s useful to know that Tahir Yuldashev did not see eye to eye with another major Al-Qaeda leader, Mullah Nasir. Plus, there was the factor of Tehreek-e-Taliban Pakistan, and Baitullah Mehsud. It’s difficult to be convinced that the various factional heads within Al-Qaeda are always on the same frequency.

Q Does Baitullah Mehsud’s elimination this month mean the terror infrastructure he set up is also no more?

A Tough to say. Eliminating a figurehead doesn’t mean the structures he sets up diminish.

Q You have covered conflict in the region for the last 25 years. How close have you been to death?

A Strange, the closest I came to death was when the JW Marriott attacks happened in Islamabad on 20 September 2008. I was beginning supper with soup along with a few friends at an eatery not too far away. The explosion happened, and the soup bowl shook on the table.

Q As a journalist, how do you prepare yourself when you go into the tribal regions of Afghanistan, Fata and Waziristan?

A The most important thing is your local source. I’m a Pashtun myself, but I wouldn’t dare to go into Pashtun areas on the Fata alone. For a white American journalist Daniel Pearl made the blunder of going alone for an interview with a militant in Karachi, and got murdered.

Q What did you make of Musharraf?

A Do we have to talk about that?

A He seemed a figure who put his own interest first. That of the nation came later. His biggest failing was that he couldn’t push through work on fundamental areas, like dams, police reforms and infrastructure-building in tribal areas. But India lost the opportunity to come up with a roadmap for peace along the border.

Q How do you mean India lost the opportunity?

A As Omar Abdullah said last year, India flunked the ‘single window system’ offered by Musharraf to resolve Kashmir. The biggest disappointment with India is that when there’s a dictatorial regime in Pakistan, she says ‘We won’t talk to a dictator!’ And when there’s a democracy, however questionable, she says, ‘But the Army and ISI control Pakistan.’ In the end, we never end up talking. Musharraf, still, provided a single point of contact and interaction. India scuppered the chance for peace in Kashmir.