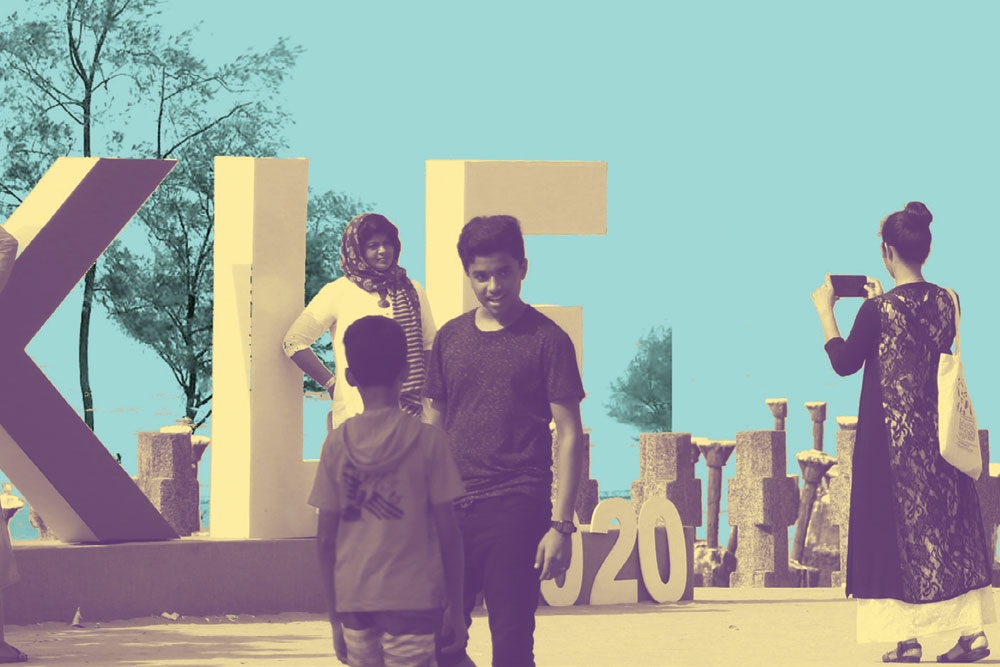 
Here is a literature festival pitched against the sea and built in the sand. Here the prudent dress down rather than up. Here the correct attire is flip-flops and a sun hat. And if you are a gentleman, a mundu (that can shapeshift between sarong and shorts) will be deemed appropriate. Here you’d be wise to arrive on an empty stomach and leave on a full one. Here the speakers will entertain you, and often the audience will provoke you. Come wielding political opinions, because this is no hideaway for the apathetic. Come here willing to listen and be sure to leave with a tan. Welcome to ‘literature on the beach’. Welcome to the fifth edition of the Kerala Literature Festival (KLF), held from January 16th to 19th, 2020.

As a first-timer at KLF and a bug-eyed novice in Kozhikode, this festival captured all things Kerala for me. It is less about show and more about substance. You don’t come here to see and be seen, you come here to engage. A scenic view is assured. A large poster of Ambedkar with ‘#Azadi’ written below has pride of place on the beach. If the happenings on stage fail to amuse you, you can watch little boys dart in and out of the waves. It is not about the trappings or ornamentation, it is certainly not about fashion. It is about the conversations, thanks to the vision of chief coordinator Ravi Deecee, festival director Sachidanandan and festival advisor Hemali Sodhi.

With much of the day’s programme held in Malayalam this is a festival for the people of Kerala. With its sea-facing venue this is truly a festival open to all. Afternoon strollers on the beach could choose to wander in. A popcorn seller tried his luck, but was escorted out when he tried to vend his wares. While many of the speakers had been flown in from across the country, the audience comprises local students, professors, filmmakers, and of course the lone drunk hankering for shade.

Spread over four days, I got a chance to experience KLF for less than two. The day I arrived I was felled by sickness, but on the second armed with yelakki bananas and ORS sachets, I strove into the sunlight. I could attend only a few sessions, but the quality of the conversations stood out. Independent journalist and writer Nitin Sethi’s session with veteran field ecologist Madhav Gadgil (known for the Western Ghats Ecology Expert Panel, aka the Gadgil Commission) took an unexpected turn when Sethi, a self-confessed ‘fan boy’ of the scientist turned into tutor, and (respectfully) schooled Gadgil on a few facts. Gadgil was not one to get cowed down, and the exchange between the two lead to a couple of ‘arey baapres’ on either side. Urvashi Butalia, Manu S Pillai, KR Meera, Ashutosh Potdar and R Sivapriya on whether English is India’s ‘national language’ also threw up interesting insights on the need for English, and the perils of its dominance.

The gusto of the audience often rose to the fore. Whether it was a young woman in the third row during stand-up comedian Papa CJ’s session or a local activist at ‘Chronicling Savarkar’. The feisty young woman, in good humour, tried to heckle Papa CJ but was soon won over by his ways. In Manu S Pillai’s conversation with Savarkar biographers Vikram Sampath and Vaibhav Purandare, a woman asked in Malayalam whether this was a bid to “chronicle Savarkar” or “whitewash” him? The session had (rightfully) focused on the story of the man, with the two writers choosing to emphasise biographical details, while staying clear of either hailing or vilifying him. The woman’s question was met with much applause from the audience. But those on stage eloquently insisted that one has to read about him and discuss him, and to make him a “political untouchable” is illiberal. I had my own run-in with a spirited audience member. A professor of English from a college in Changanassery, near Kottayam, came up to me after my session with civil rights activist and Dalit scholar Anand Teltumbde. He told me that his student and he were talking about the irony of someone with a “surname of privilege” hosting a panel titled ‘Annihilation of Caste’. Initially thrown by his accusation, I told him I knew the baggage of my surname but had also chosen to hold onto it, as it is the one clear marker of my Malayali identity.

One cannot come to Kerala and stay clear of its politics. On Saturday, the promenade by the beach turned into an avenue of people as Kapil Sibal had arrived to speak against the Citizenship Amendment Act (CAA). We were a distance away from the podium but his speech, which he delivered in Hindi and English, and was translated into Malayalam, boomed down the road and along the Arabian Sea. Men (who far outnumbered women) stood and sat by the sides listening in rapt attention and hooted and clapped especially when he spoke against the Modi-Shah duo.

On Sunday evening similarly, a robust anti CAA-NRC protest blocked the road heading to the airport. While a few enterprising vehicles found alternate routes, most passengers had to disembark from their taxis and walk the last one kilometre to the airport. The protestors politely parted to make way for the passengers. Many a time they even offered to haul unyielding suitcases and strollies over bumpy patches. The challenge soon turned from navigating a crowd with luggage to declining offers of assistance from Fahadh Faasil lookalikes. The crowds were dense but never intimidating. This was clearly a state where rallies and protests are the norm rather than the exception. The daily business of life contours around it and doesn’t come to a halt. In Kerala, political awareness and participation is not the fiefdom of politicians, it is of the people.

When it comes to Kozhikode, it would be an unpardonable oversight to not mention the food. The Malabar cuisine of Paragon Restaurant, established back in 1939, is the stuff of legends. We were privileged that Paragon catered lunch at the venue. But determined to go beyond Paragon I asked my Uber driver if he had any recommendations. He said that the best biryani in town could only be found at the old Hotel Rahmath. Driven by greed, a friend and I decided to partake of dinner there at 5.30 PM. Located in a decidedly ugly tyre market, the food at the restaurant was top class. Devoid of the fuss of menus, patrons arrive, sit, order, relish and depart. My friend and I shared a plate of small-grained fragrant biryani, a plate of crispy masala prawns, fish curry, paratha and chai. I don’t have the required adjectives to describe the food, but this was a meal that warmed stomach and heart. The bill came to less than Rs 500. You leave in this lull of complete contentment.

Post dinner we decided we should find ourselves a bar. And while Kerala has no shortage of them, finding a place where a woman can drink proved to be as challenging as finding a teetotaller Malayali man. It is not that they don’t exist; it is just that one has to travel far to seek them out. The first place we stepped into was a smoke-filled coven of guzzling males. We beat a hasty retreat. I decided this was not the time or place to pitch my feminist flag. We then went to a rooftop ‘family restaurant’, Sea Queen Hotel, where much to our delight we found women sipping beer and smoking cigarettes.

At the end of the festival, there was unanimous agreement on the alacrity of the army of blue-t-shirt-clad volunteers whose eagerness did not always match their efficiency. Speakers concurred that there should be more time for audience questions given their smarts and sparks. Here was a festival that was less pomp, and more purpose, just how a literature festival at the beach should be.