‘Bleed Out Your Truth’ 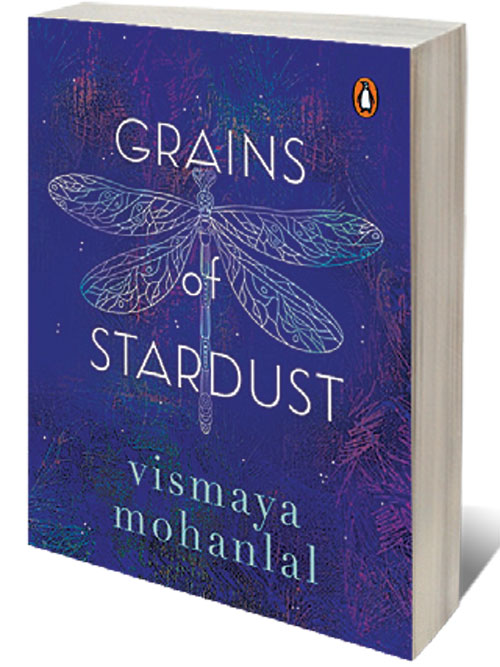 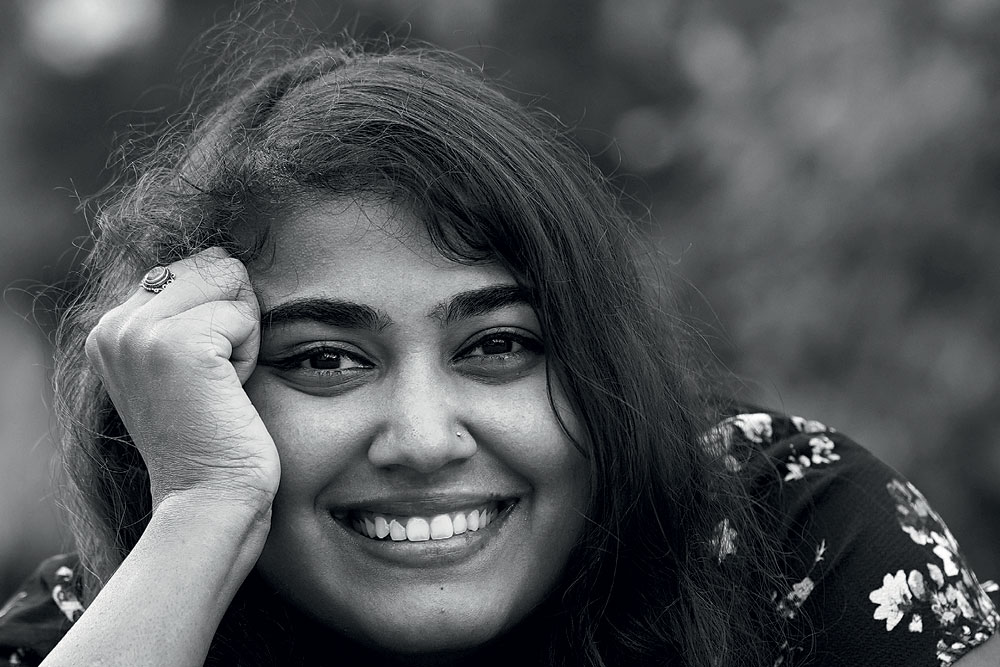 
‘Grains of stardust
in a whirlwind of glitter
suspended in space’

THESE LINES, LIKE much of Vismaya Mohanlal’s debut volume of poetry Grains of Stardust (Penguin; 128 pages; Rs 399), conjure up elusive, vivid, long-lasting images that are all the more effective for their brevity.

Vismaya’s (she prefers to go by her first name) poems also sum up the complex nature of love, relationships and truth. The phrase ‘grains of stardust’ recurs throughout the poems. She tells Open, “I don’t have an explanation for it. It was a phrase that was repeated in my poems and so I decided that it would be the title of my book.”

The poems are accompanied by a number of Vismaya’s artworks—these are intense abstract paintings and sketches, which complement and enhance the mood of the poetry.

“Grains of Stardust is mostly writing and art put together from a sketch book that I’ve kept over the years,” Vismaya explains. She elaborates how this passion crystallised into a published work over a period of time. “There are some things I wrote and drew when I was probably 16 and some more recent that I did in my
twenties.” Her brother, the actor, singer, and songwriter Pranav Mohanlal, had suggested she put it all together in a published volume, making for an unusual and original book. Most poems are a page long, and some consist of a single word, such as the poem, ‘Oops’.

Vismaya’s poems, mostly untitled, reflect the writer’s own search for truth and identity. Her verses are brutal, yet curiously restrained at the same time. The lines of one poem, ‘Painting on mirrors/We sit and spend hours/Layers and layers/ But what are we/Beneath it all?’ allude to the false appearances that we carefully construct and show as a front to the world, always hiding our true inner selves. Vismaya’s poems seem to make the case that such deception is worthless and it is better to break these false fronts no matter what the cost, and that we should stop lying to ourselves and each other. The message seems to be that it is better to face the truth, no matter how painful it is. She urges in the same poem, ‘Shatter the glass/Swallow the pieces/Bleed out your truth’.

The idea that pain is necessary in the quest for truth and art is another recurrent theme. It is noted in the lines of another poem, ‘A pencil to my heart/The lead slowly makes its way through/ Willing the words to bleed?’

With these brief but scorching words, it can be inferred that the poet feels that real writing, like real art, can only be achieved through intense struggle and honesty. Yet for all this impassioned exhortation, Vismaya is not one to force her views on her readers. She says, “There’s no right or wrong, it’s subjective. And that’s what I love about art, that different people looking at the same thing can derive completely different meanings from their perspective and their experiences. And I think that’s beautiful because now, it’s not just my writing or my art, it’s yours too.”

Many of her verses on love are hopeful and indicative of beginnings, as is seen in the lines, ‘Your energy/Cool still waters/keeps me awake/… I fantasise of what/ we could be/ to Stardust in your eyes/ as they look into mine/Stardust in our souls’.

Themes of loss and misunderstanding in relationships are also prevalent in the poems. In one of them she captures the painful essence of fading hope: ‘I wait and wait/But you never show… I ask the moon what went wrong/The moon shows her face/Lights her fire/And now I understand’. The next verse seems to be a dull acceptance of an ending. ‘I was too early/And you too late’. This is echoed in another of her poems, ‘And here we go again/You’ve got magic in your eyes/And I can’t look away/ But I’ve been fooled too many times’.

Artistic talent is something of a tradition in the Mohanlal family.

Vismaya’s father Mohanlal is a superstar of Malayalam cinema. He has written the foreword to this book explaining, ‘Grains of Stardust is a synesthetic stream of consciousness that does not distinguish between journey and destination, but meanders unchecked upon the river of human emotion.’ Then there is Vismaya’s mother Suchitra Mohanlal, co-owner of Mohanlal’s production company Pranavam Arts International, who has also been a strong influence on her daughter’s artistic development. Vismaya’s brother Pranav is also well known in the Malayalam film industry. Has she ever considered a future in acting as well? Vismaya replies, “I have considered it and I would be interested if I came across a script that I liked.”


However, at present, Vismaya is also making a name for herself in her own right with her writing. The response to her first volume of poems has been enthusiastic and brought her new readers and fans. She has also received praise from the film industry, including from actors Kavitha Nair and Dulquer Salmaan. Even Bollywood star Amitabh Bachchan, on reading the book, tweeted, ‘A most creative sensitive journey of poems and paintings. Talent is hereditary.’ Vismaya has taken this praise in her stride, merely saying, “I’m a little overwhelmed. Overwhelmed in a good way.”

Vismaya’s poetry’s has been influenced by many writers. She says, “There are so many poets, artists and writers who inspire me and whose work I admire.” She speaks about her tastes in prose. “Off the top of my head, I’d say Elena Ferrante is my favourite author. I read all four of her Neapolitan novels a few years ago and I just loved the way she wrote. It was so visceral and honest and real.” It is no surprise then, that these very qualities are reflected in Vismaya’s own work. She is at the moment reading On Earth We’re Briefly Gorgeous by Ocean Vuong.

At a time when publishing poetry is becoming increasingly difficult, Vismaya needed determination and self-belief to pursue this passion:

“I didn’t have any hopes as such when I sent in my work to the publishers. Not only because I was a first-time writer, but also because it was poetry. My plan was to self-publish it, if none of them got back to me.”

But she doesn’t allow her optimism to flag. “From what I know, in general, poetry doesn’t get bought as often as other genres. However, I think, with social media, more people are starting to buy poetry books as writers now have that platform to share their work and connect with their audience,” she says.

Vismaya is hopeful about the future of poetry in English in India because of this. “I think how people perceive poetry has changed; (social media) has made it more accessible; poetry doesn’t always have to have dense, flowery language, though that is also beautiful. The point is that there’s space for this too”.