Beyond the Fear Factor

The emotional quotient of politics 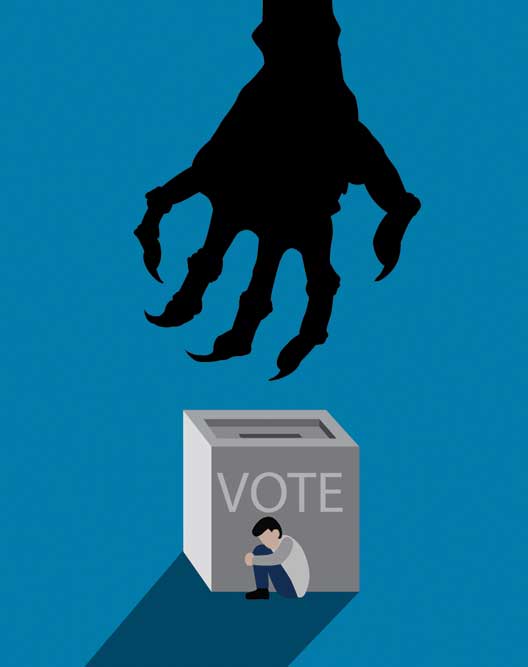 MATTERS CAME TO a head in June, 1975. A beleaguered Indira Gandhi imposed an ‘Emergency’ in India after two years of political unrest in the country. In these years, strikes, judicial verdicts against the government, adverse economic conditions and unrelenting opposition to the Prime Minister had become a regular feature of the political landscape.

Since then, analysts have been busy explicating the reasons for the breakdown of democracy in India. The explanations range from Marxian ‘crisis’ theories to the intensely personal aspects of the Prime Minister’s rule. Events, personalities and actions have been parsed threadbare to understand the Emergency. What remains vivid in the decades since is the chain of events—how different actors behaved as events unfolded. Behind every step—in calls for strikes, the organising of mass protests and the final act of throttling freedom—fear lurked somewhere. Jayaprakash Narayan assumed that if Indira was not removed, democracy in India would come to an end. The latter, in turn, assumed the opposition was out to ruin her. Publicly, of course, everything was couched in terms of ‘saving institutions’, ‘the interest of the country’ and other high-minded phrases but the reality was unmistakable to observers of that time: the psychological chain linking one event with another was sufficiently powerful to be conflated with cause and effect.

Since that time, however, analysing events in terms of emotions and psychological motives has become unfashionable. For one, emotions are considered unfathomable and beyond the means of normal procedures of social science and its methods. For another, the mere mention of emotions evokes the spectre of irrational behaviour. This association is particularly strong among people trained to look at the world from an economics perspective.

Fortunately this pernicious attitude is being challenged now. To be fair, scholars like Jon Elster, among others, have devoted considerable analytical energy to understand the role of emotions in a wide array of phenomenon ranging from politics to issues such as addiction and backsliding behaviour. One could almost say that emotions have been mainstreamed in the social sciences.

Two recent books, Martha Nussbaum’s The Monarchy of Fear: A Philosopher Looks at Our Political Crisis (Simon and Schuster; 272 pages; Rs 1,793) and Gwyneth McClendon’s Envy in Politics (Princeton University Press; 248 pages; Rs 3,355) cast a wide net on what they seek to explain. While one is a philosopher’s take on the contemporary ‘crisis’ in American politics that tries to go beyond the day-to-day commentary and analysis to describe what is going on; the other is a political scientist’s sophisticated blending of theory with statistical evidence gathered from South Africa and the US to understand the role of envy in attitudes toward redistribution, government action (or inaction) in providing goods and services, and a very old puzzle: collective action.

For Nussbaum the key emotion of our age is fear. In The Monarchy of Fear she takes forward her analysis of fear from an earlier work, The New Religious Intolerance: Overcoming the Politics of Fear in an Anxious Age (2012). Fear, she says, is a very ancient emotion with deep evolutionary roots. This is one reason for its persistence and prevalence: it has served humans well in their quest for survival. As a result, it is infectious and afflicts people across the political spectrum. In a striking passage that echoes India’s experience in destruction of democracy in 1970s, she notes that, ‘…this present moment may look like backsliding from our march toward human equality, but it is not the apocalypse, and it is actually a time when hope and work can accomplish a great deal of good. On both left and right, panic doesn’t just exaggerate our dangers, it also makes our moment much more dangerous than it would otherwise be, more likely to lead to genuine disasters’. Her example is from contemporary US but the mechanism behind it probably has a wider ambit. When the chain of fear starts being built, one step leads to the other almost seamlessly, until disaster strikes.

Fear is a very ancient emotion with deep evolutionary roots. This is one reason for its persistence and prevalence: It has served humans well in their quest for survival. As a result, it is infectious and afflicts people across the political spectrum

One problem with Nussbaum’s framework is her reduction of fear to almost the level of a root emotion. For example, she derives envy from fear and says that, ‘I’ve said that envy is born of insecurity. Fear, then, is at its root: the fear of not having what one desperately needs to have. If we were complete, we would not need anything, and so we would not have envy.’ The modern scientific study of emotions, however, paints a very different picture. In one recent work—The Neuroscience of Emotion: A New Synthesis (Princeton University Press, 2018)—two scientists, Ralph Adolphs and David J. Anderson, question the assumption that there are ‘primary’ emotions that cannot be broken down further. Instead of deriving one emotion from another, their experiments—in rodents and humans, among other animals—look at emotions in different dimensions such as valence, persistence and intensity. Another map, so to speak, categorises emotions as aroused/not aroused contrasted against unpleasant/pleasant.

The middle ground between the intense philosophical speculation of the kind engaged by Nussbaum and the laboratory where individual emotional states can be tested is much more fruitful for looking at the real world. That is McClendon’s world. Her operative emotion is envy and the clutch of associated status motivations—her careful word for emotions when superimposed on real world phenomena—such as spite and admiration.

Her motivating question is ‘why some people’s political attitudes and behaviors diverge from their material interests. Why do some citizens support taxation and redistribution policies that are personally costly to them? Why do some governments fail to implement funded policies that would make constituents materially better off? Why do citizens contribute their time and energy to collective political action instead of free-riding off the efforts of others?’ In combing through a mass of statistical data she finds that a significant proportion of people display this anomalous behaviour. In rational choice models and economic explanations, such deviations from rational behaviour are either transitory or are statistical quirks. But in reality, many of these ‘deviations’ display troubling regularity. McClendon’s own estimates with respect to attitudes towards redistribution peg some of these at close to 30 per cent. Envy with respect to others in the group where one lives—neighbourhood, people of the same ethnicity etcetera—explains many of these puzzling behaviours.

McClendon’s explanation for why people engage in collective action such as participation in risky political protests is based on how taking part leads to an increase in admiration, a quality that she finds people value greatly. In contrast, economic explanations deriving from the tradition originating in the work of Mancur Olson state that ‘group action’ is almost impossible: people would rather free ride and let others do their share of the work. Many puzzling phenomena such as revolutions for example, are then reduced to the mercy of ‘selective incentives’ for being possible in the first place. This is strange to say the least and in defiance of the record of history. McClendon shows that one does not have to completely discard rational choice models: better statistical models that incorporate emotions such as envy are useful alternatives. In doing this, she brings back life to other traditions in economics. To take the example of collective action, in Shifting Involvements: Private Interest and Public Action (1982), Albert Hirschman explored why disappointment is a powerful force that can negate transaction costs and make collective action seamless. The ‘rebound effect’—disappointment with private life quickly turning into public action—was an interesting explanation but one that died in the absence of statistical analysis of the kind that is now possible. In marshalling of data, discerning econometric analysis and cool use of political theory, Envy in Politics is likely to be a modern political science classic.