Benyamin: The Smell of Jasmine 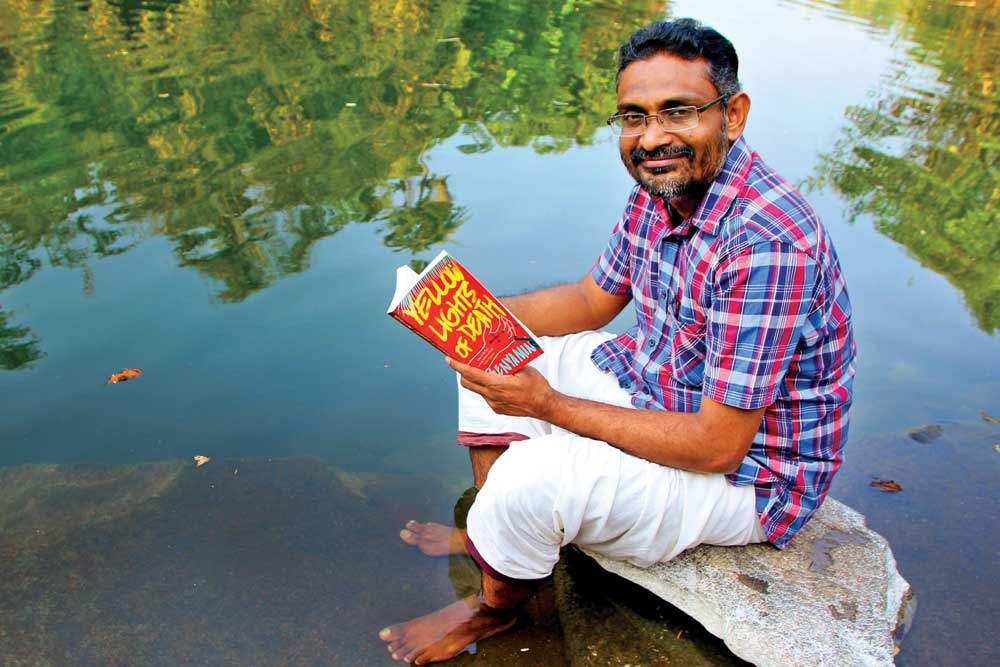 IN A STRANGE twist of translations, Malayalam author Benyamin’s recent novel Jasmine Days (Juggernaut; 264 pages; Rs 499; translated by Shahnaz Habib) and his most acclaimed work Goat Days share similar titles in English. Goat Days, the story of a Najeeb, a herdsman in the middle of the Saudi desert, is a parable of survival and hope. Jasmine Days, told in the epistolary form, recounts the birth of a revolution in a Middle Eastern city through the eyes of a young woman, Sameera Parvin. Both novels have protagonists of large hearts and dogged will, and the setting is the Middle East, but the similarities end there. The English titles have confounded Benyamin. In an email interview, he says, ‘I am a bit confused about the similarity of the titles. Readers may think I am imitating myself. The original titles were entirely different. If we look at literal translations, one was ‘goat life’ (Aatujeevitham ) and other one was ‘the days with jasmine colour’ but in English both came with ‘days’. That was unavoidable and a limitation of the language.’

The English language might not do full justice to the Malayalam original, but one is grateful for the existence of the translation. Benyamin (originally Benny Daniel), author of close to 20 books in different genres—from short stories to novels to memoir—is easily one of the leading regional voices of our time. While much of Indian writing in English today is formulaic (with the exception of the rare breakout novel), regional writers are the ones grappling with contemporary issues and lived realities. Their work, unlike many of their contemporaries writing fiction in English, does not read like lesser imitations.

Jasmine Days and Al Arabian Novel Factory (coming out in 2019) are twin novels set against the backdrop of the Arab Spring. Jasmine Days is located in an unnamed City, now on edge as the friendships of decades are morphing into suspicion and hostilities. (Benyamin chose to call it the ‘City’, as this gave his imagination the freedom to mix place and time.) The Sunnis of the City see themselves as ‘first-class citizens’ and those who’ve come from Iran are deemed ‘second class’. It is a world where women are forbidden Facebook accounts and men make all the rules. Sameera, a young Pakistani radio jockey at Orange Radio, lives at Taya Ghar with a bevy of aunts and uncles, and finds solace in music. The novel is her journey; she will travel from naivety to awareness on a road pitted with bloodshed and violence. While at first she pays little heed to sectarian differences, she will come to see the horrific fault lines and how ‘Shias were not just second-class citizens in the City, they were kafirs to be detested like hell’. When she questions God, she speaks for all those who interrogate titles like ‘insider’ and ‘outsider’ and those who do not comprehend violence in the name of religion. She asks, “Why do we fight in your name and call each other kafirs? If there is only one truth, why don’t we all follow that one truth? What right do governments have to divide and designate people as official followers and dissidents? Just because a government is in power and has managed to rule over its people for a long time, does that give it the power to brand some people rebels?”

A few of Benyamin’s previous works have dealt with religion— Christianity, to be specific. He has chronicled quarrels among Syrian Christians and the conflict between the Communist Party and the Church. What is his relationship with religion, I ask. ‘I practise religion only as a social gathering medium. If I want to speak to god, I don’t want a mediator from religion. I love spirituality but it is far away from religion. Religion is just an institution to rule people. For them it is a weapon to attack others and strengthen their own power,’ he replies.

Most of the expatriates in Bahrain were pro-regime. But I searched and enquired about the reason behind the Jasmine Revolution. I learned about very genuine reasons and about the conflict between Sunnis and Shias – Benyamin

The doors of Sameera’s closeted life are blown off their hinges when protests start to take root in the City. The power of Jasmine Days is that it tells a compelling story, but doesn’t take sides. Benyamin elaborates his stance, ‘I had friends from both sides. So, I was aware of both traditions. In a novel I didn’t want to accuse someone or defend another. But I had to tell the conflict and describe the experiences. So I had to take a neutral stand on beliefs and I knew it should be very balanced.’

An adage often bandied around is that ‘the hottest place in hell is reserved for those on the fence’. Jasmine Days is no fence-sitter, rather it is an exploration of what ordinary people do in extraordinary circumstances. It seeks to unpack the consequences of a father’s unexplained disappearance and brutal treatment by the police, on the wife, and on his son. What happens to generations of children whose lives are built ‘on stories of tears’? Do these stories goad them into the path of hate and revenge? Who do they take revenge on? And how can the endless eye-for-an-eye cycle be broken? The book reminds us that if we fail to see that every person is bedevilled by their own monsters—fictions that we latch on to—then all our education and experiences are tosh.

Benyamin is deeply aware that hate is not confined to certain ethnic or religious groups, it is a universal experience. He says, ‘Someone is forced to hate only because of their birth. In India we experience this as its peak in the caste system. The aim of the novel is to acknowledge the pain of a such person.’

LIKE MILLIONS OF Malayalis seeking out a brighter future for themselves and their family, Benyamin worked for 21 years in Bahrain. For the last five years, he has been in the town of Pandalam, around 100 km from Kerala’s capital Thiruvananthapuram. He enjoys the quiet and steady rhythms of the town, and has spent the last few weeks following the monsoon from his desk window. He needs a familiar setting to write in. He cannot understand how some writers choose remote places, such as resorts or retreats, to frame their thoughts and sentences. He cannot imagine writing anything outside of his room, packed as it is with his books, magazines, notebooks, pens, papers and a laptop.

But like a true writer, he is not one to be lulled by beauty. Even while describing Pandalam, he says, ‘If I look a bit carefully the pictures are different. Fanaticism is growing and has reached dangerous levels. They are commanding us to write, eat and talk, as they wish only. It is time to raise our voice for the freedom of speech.’

We fiction writers may say that we are ‘beautiful liars’. But in recent days, some other people have been better than us in telling the lie beautifully. They are journalists, religious leaders, politicians – Benyamin

The 2011 Jasmine or Tunisian Revolution was an intensive campaign of civil resistance, including street demonstrations, which led to the overthrow of the country’s long-time president, Zine El Abidine Ben Ali. The protests for freedom of speech and against despotic governments sparked off the Arab spring.

Benyamin remembers his days in Bahrain as peaceful. Mob violence against the regime happened in 1993 and 1999, he recalls, but it subsided quickly. ‘Other than that, most of the period was so calm and quiet,’ he says. ‘Compared to many other Gulf countries, Bahrain has good freedom.’

Initially, he was ‘totally unaware of their political and democratic ambitions’. He would wonder how these people had lived under a monarchy for 40 years and never raised a voice against it. Were they truly content with the system of rule and processes in place? But not one to rely on easy assumptions, he sought out local opinions and friends. He says, ‘I made many Arab friends from various classes of society. I talked to them about many issues. That was a real eye-opener to the Arab mind. At that time, the Arab Spring, starting from Tunisia, was spreading through the Middle East. It happened even in my city. It was stunning. The whole country gathered in the central square and asked for the resignation of the regime. They showed their power and eagerness for democracy. In many countries it was a success but, in my place, it was a big failure. The victims of the incidents were many, not only the nationals but also the expatriates. Those real-life incidents are the inspiration of this novel. I developed the main characters from my own friends and acquaintances.’

When the first signs of the Jasmine Revolution wafted through Bahrain, many of the expats were at first perplexed. He says that compared to other countries in the Middle East, at the beginning it was peaceful and happened only on weekends. But the huge support from common people changed the situation.

‘Freedom Squares’ mushroomed across the city. Rallies of protestors emerged from villages, and would pass the street in front of his apartment. He was a witness to the churn around him. While many of the expats chose to see this as a ‘local problem’, they could not turn a blind eye, as the hour- long traffic jams, mob violence and arson edged closer home. Benyamin recalls slogans against expats (‘You are stealing our jobs’) and warning letters stuck on the door. He says, ‘It was a time when I was living with my family. We were in fear that anybody could be attacked on the way to school, hospital or work place. Most of the expatriates were pro-regime and considered the protestors attackers. But I searched and enquired about the reason behind the Jasmine Revolution. I learned about very genuine reasons and about the conflict between Sunnis and Shias. I also deeply understood the politics of the Middle East. They have their own politics and democratic ambitions. It may be against us, but I am certain that it is reasonable. The incidents and my findings lead me to write this twin novel.’

Sameera sees all too closely how propaganda can become news, and tittle-tattle makes headlines. One day on Twitter, she writes, ‘When there is no freedom of press, rumour becomes news.’ Speaking of Jasmine Days as an acute investigation of our ‘post-truth’ age, Benyamin says, ‘We fiction writers may say that we are ‘beautiful liars’. But in recent days, some other people [have been] much better than us in telling the lie beautifully. They are the journalists, religious leaders, politicians, etcetera. In the past we thought they never said lies, but nowadays nobody believes their words. They are the real fiction writers now. They create their own truth just for the sake of their own benefit. The most dangerous platform is Facebook. If we ban Facebook, the world will be much better. It is helping to spread a culture of hate in India.’

It is in protest and constitutional reform that Benyamin finds hope, but even there, he knows how quickly it can be misused.