Amit Chaudhuri: Master of the Ellipsis

The author in conversation with Nandini Nair. Photos: Rohit Chawla 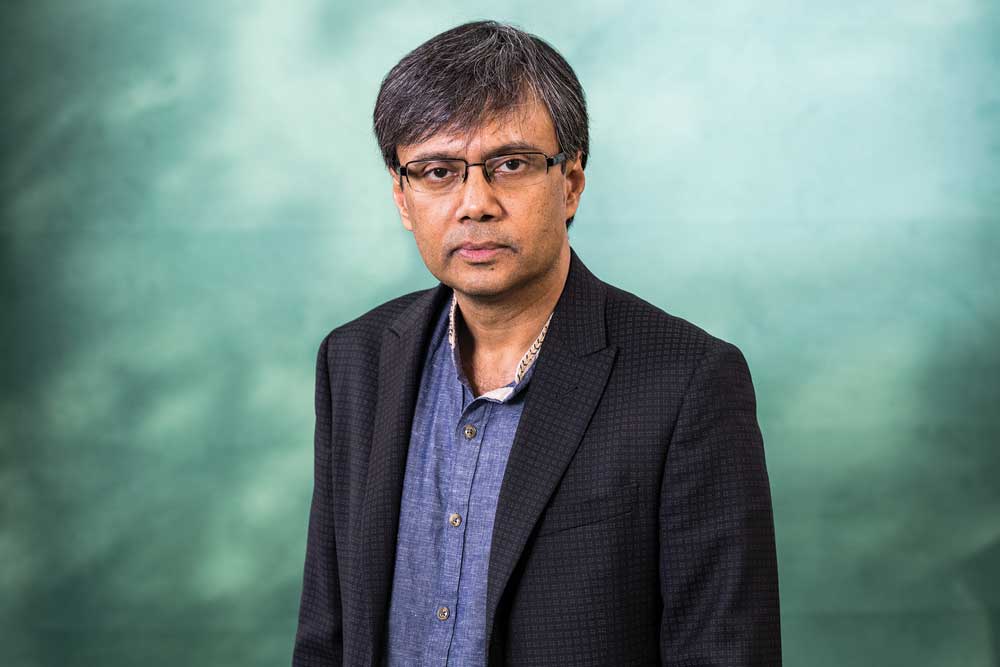 HOW IS A novelist to write about the 2008 terrorist attacks in Bombay? Does he go all fire and brimstone, make it the pivot of the story, and assert that the city can never be the same again? Or does he stitch it into the fabric of his tale, like a tailor adding a button to a shirt, the button being essential to the shirt but not its sole point? That is what critic, essayist and novelist Amit Chaudhuri accomplishes in his latest work, Friend of My Youth (Hamish Hamilton; 120 pages; Rs 499). Let’s see how he does it. The narrator orders tea at the Sea Lounge of the Taj. He asks the waiter for the bill:

And there, within the simplest of exchanges, sculpted like a poem, the reader has the most profound experience. The waiter is suddenly no long just a waiter, but someone who lost friends and colleagues, who was lucky to have not been there, but chooses to continue working at a hotel, a hotel that was attacked and then reopened.

In the foreword (to the 25th anniversary edition of A Strange and Sublime Address, released last year), acclaimed Irish author Colm Toibin writes, ‘In Chaudhuri’s book… although politics and a sense of public affairs are allowed into the narrative, they are there glancingly, as part of the flavour of things, and are no more important than anything else.’ That is what we have just seen in Friend of My Youth as well. Politics and public affairs flavour the text, but are no more important than anything else.

In the last 25 years that Chaudhuri has been writing, he has made a name for himself as a writer ‘of life’. In his work, the minutiae are not just detailing, but the stuff and substance itself. Character is not central to his novels, but the city is, as seen through a window or under a gaze. The circadian replaces plot. Strolls, conversations and ruminations elbow out ‘events’ and ‘happenings’. Back in 2005, in his column in The Telegraph headlined, ‘The East as Career’ on ‘transfiguring the mundane,’ Chaudhuri wrote about the art of Satyajit Ray and the baggage of ‘exotic’. He cites an essay Ray had written in 1948 called ‘What is Wrong with Indian Films’. In it Ray had written, ‘The raw material of the cinema is life itself. It is incredible that a country which has inspired so much painting and music and poetry should fail to move the film maker. He has only to keep his eyes open, and his ears.’ Like Ray, Chaudhuri too uses ‘life itself’ as the raw material of his art, as acclaimed literary critic James Wood noted in 2015 in The New Yorker.

Friend of My Youth is an account of a narrator and novelist called Amit Chaudhuri who visits Bombay, a city where he grew up, for a book event. In Bombay he hopes to meet his only surviving school friend Ramu Reddy, who he’s known since sixth grade. But Ramu isn’t in Bombay. He’s in rehab in Alibagh. The narrator remembers the ebb and flow of his friendship with Ramu, which was ‘convivial’ and ‘fractious’. As the narrator moved between countries, Ramu was moving in and out of rehab. The last time they spoke was at the end of 2008, when ‘the city was running amok with terrorists and commandoes’. As the narrator travels through the city, past the familiar and the unfamiliar, he also travels back and forth in time. The changes in the city are not detailed by chronicling the rise of flyovers or the growth of skyscrapers. Rather, in simpler observations, such as, ‘When I was a boy, people knew Malad as they knew Jupiter. Today, every other person is from Malad or Mulund.’

Friend of My Youth is a covert short novel as it upends an all-too-common question that is applied to fiction: how much is autobiographical? When Amit Chaudhuri the novelist writes about an Amit Chaudhuri the writer of The Immortals and Afternoon Raag, where does fiction begin and where life? Friend of My Youth proves the idiocy of the ‘autobiographical’ question, as these distinctions are drawn in shifting sands.

Speaking from his home in Calcutta, Chaudhuri says, “Writing is more than what we see between the covers. It is something that we participate in and is what the writer finds himself in the realms of. The writing has begun in the realm of living already. To think that the writing is only in the book or what is written down is misleading. It is something that converges with living itself, for me. I am not talking about everybody. I don’t know how it works for everybody.” In Friend of My Youth, Chaudhuri shows that his writing is not only of life, but is life.

Writing is more than what we see between the covers. It is something that we participate in. The writing has begun in the realm of living

By proving how writing is life, Chaudhuri reconfigures the conventional understanding of a novel itself. The 54-year-old writer believes that the novel has become more conservative and mainstream over time, with less space for the idiosyncratic or strange. He says that we’ve grown used to the idea that the novel confirms a worldview that we already know. It is a form burdened by expectations—whether of length or subject matter.

Writing is more than what we see between the covers. It is something that we participate in. The writing has begun in the realm of living

For Chaudhuri, the lure of the short novel (which would also apply to his longer work) is the attraction of compression on one hand, and formal beauty on the other. He elaborates, “The credo taught in creative writing school— ‘show don’t tell’—is not of interest to me. Not telling, not showing, holding back, sometimes telling, sometimes showing, is an extremely important part of art.” He believes that the novel over the last 30 years, especially the Indian novel in English, has come to be identified with “a certain garrulous quality that is taken to be a virtue.” While he has no quibble with loquacity, he feels that it risks pandering to Western traditions. He says, “What it does, is take away from notions of economy, which are very much part of non-Western traditions. Non-Western traditions are supposed to be storytelling traditions, but even more so, they are supposed to be synecdochic traditions; where they use very little to suggest much more.”

While the unsaid beckons him, formal beauty also attracts him. He says, “I am very interested in this abstract formal beauty that shorter forms have. Over and above all the stuff that is represented in the novel, it is the beauty of form itself that appeals to me. For me, every para is a formal unit in itself, so that is part of the beauty.”

In this novel, the narrator is also candid about the business of being an author. The desire to see one’s books on the shelves, the drollness of book events, the recognition that not many people read, and fewer still read closely, the discomfort with photoshoots and publicity events. But all of this is dealt with a great lightness of touch; these aren’t trials as much as simple demands of the job. The narrator recounts an interview that happened back in 2008 or so. What is of interest here is less the exchange between subject and interviewer, but more so the wandering of the subject’s mind, as he looks upon the same spaces he had seen as a boy, and tries to decipher these new images and scenes. Here, daydreaming, a deeply private and haphazard reverie coalesces with an interview, a formal and structured act.

For Chaudhuri the writer, daydreaming and desire are also essential requisites of life. The narrator and Ramu are similar because they seem to share a certain wistfulness, perhaps even a missingness. What or whom is being missed is never known, but the awareness of an absence and incompleteness, a desire for something else echoes through the work. Chaudhuri explains, “It is a kind of daydreaming or fantasy that can only be experienced and communicated in terms of the momentary. One is only interested in the moment of speculation and transport—being changed by what one desires. One is not happy completely being in oneself. One is constantly desiring to be elsewhere. But one is not sure what the something else or someone else are.”

It is in this pithiness and quietude of his enterprise that Chaudhuri creates his own brand of the novel. In his essay ‘Huge Baggy Monster: Mimetic Theories of the English novel after Rushdie’ (published in Clearing a Space: Reflections on India, Literature and Culture, 2008), he writes with insight and fervour how while the ‘large novel (think Vikram Seth or Salman Rushdie) might have come to seem typical of the Indian literary enterprise, it is actually not.’ He cites Indian masters like Kannada writer UR Anantha Murthy who ‘suggest India by ellipsis rather than by all-inclusiveness’. He contends that while the largeness of certain Indian novels in English ‘allegorises the largeness of the country it represents’, ‘it is worth remembering that those who write in the languages of India, whether that happens to be English, or one of the modern ‘vernaculars’, do not necessarily write about ‘India’, or a national narrative… but about cultures and localities that are both situated in, and disperse the idea of, the nation.’

In Friend of My Youth, Chaudhuri once again shows that a contemporary Bombay novel doesn’t need to be about big topics, it can be about two old friends wandering through the city, unearthing memories and simply daydreaming. The story emerges in the ellipsis.