Gold coin peddlers in the US are selling the metal as one of three ways to stave off doom, God and guns being the other two. Rational investors, thankfully, remain calm. 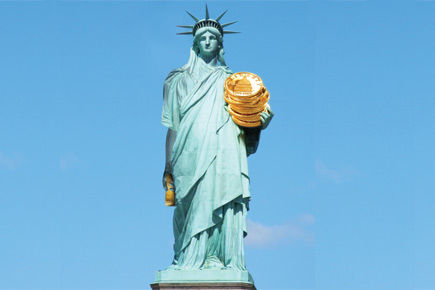 Gold coin peddlers in the US are selling the metal as one of three ways to stave off doom, God and guns being the other two.


America is in the midst of gold fever. Gold buying parties, where comrades gather at a friend’s house in order to showcase their gold to prospective buyers who will hopefully purchase it, have become all the rage. That’s not all. Consumers nowadays in the United States are being bombarded daily with radio and TV advertisements asking them to buy gold. Companies such as Goldline International and Rosland Capital are telling the American public that gold is a safe way to hedge their bets against a declining economy and weakening US dollar.

In times of recession, characterised by a weakened dollar and the looming threat of inflation, it is quite common to see more people lacing their portfolios with gold, as was the case in 1980—a year that saw inflation levels around 13 per cent—when the price of gold reached $850 per ounce. Today, the price of gold has topped its 1980 high. As of 7 January, the price of gold is $1,199.7, but when compared to the 1980 high adjusted for inflation, $2,231.6, it falls significantly short.

It is difficult to say exactly how much gold is being traded at the moment, as data from the World Gold Council for the year’s fourth quarter is not yet available. What is known is that in the third quarter, gold demand rose to 800.3 tonnes, up 15 per cent from the second quarter. While this may convey the message that now is a prime hour for gold, it should be noted that gold demand is down quite a bit from its previous high in the third quarter of 2008, when total gold demand touched 1,205.6 tonnes around a volatile time for the world economy.

Is the need for gold real or is it merely a scare tactic used to cash in on fears and uncertainties faced by people under economic stress? “Well, unfortunately, I think it’s the latter and not a very positive development for a would-be consumer,” assesses John Nadler, senior analyst at Kitco, a Montreal-based bullion dealer who knows a little something about the value of gold, once having financed his escape from communist Romania using gold coins. “Gold should be bought with the expectation of non-performance,” he advises, “You buy gold and hope that it doesn’t go to the moon because that really entails everything else you own going up in smoke.”

Moreover, the gold that today’s sellers are peddling is not necessarily the kind that investors should be seeking. These companies deal mainly in numismatic, or collectible, coins. “Value here depends more on the story that’s attached to that gold coin, rather than the content,” says Nadler, “That’s not gold investing.” Central to the debate is the fact that many of these gold selling organisations advertise heavily on Fox News, whose pundits often promote gold themselves, particularly  Glenn Beck.

Beck and others were recently lampooned on both Jon Stewart’s The Daily Show and Colbert Report, two satirical news programmes both airing on Comedy Central. In their reports, they highlighted the link between advertisers and newscasters, citing in particular Beck’s warning of “the three G system” which states that in a total economic collapse, citizens will be forced to rely on “God, gold and guns”, and his warning that a government seizure could be on the horizon.

This scare of a return to the west’s wild old days is a selling point for Goldline International, one of the gold peddlers. To goad people into buying gold coins, it cites the supposedly reassuring fact that gold coins in particular were exempt from executive order 6102, which, under Franklin Roosevelt, required American citizens to trade in almost all their gold to the Federal Reserve in exchange for money. On its website, Goldline says that since gold collector’s coins were not taken away, collectors who held onto their gold profited immensely once the gold price soared after the confiscation.

“Fear mongering, driving people to gold with the idea that governments will collapse, that the dollar will die a violent and sudden death, that government confiscation is around the corner, is really disingenuous and it obviously sounds like a sales agenda,” says Nadler.

Commodities investor Jim Rogers, creator of the Rogers International Commodities Index, owns gold, but is not currently buying any. ‘I own it and am not selling it, but I would not buy at the moment because of the recent run-up,’ he says in an email. While he does see gold as a solid asset, he sees other commodities as sound investments in this economy. He mentioned silver and palladium in an interview with BusinessWeek last month as value picks because of their low price. Additionally, he cites agricultural commodity investments as financially worthwhile.

As informed investors see it, now may be too late to get into the gold game, as prices are already high. This was the case in 1980 when investors who joined the rally late found that when gold stopped at $850 an ounce, they lost 45 per cent on their money, according to Nadler. “A lot of people who bought at that same high still have not broken even in terms of inflation adjusted value,” says Nadler. “[Gold] is best thought of as a crisis hedge,” he elaborates, “Over the long term, gold can protect against inflationary periods of the extreme variety, but not generally, and not very well against ‘mundane’ periods of 5 per cent or less inflation. So for that type of hedge, it is not the best vehicle.” In the US, November 2009’s inflation was recorded at 1.85 per cent, with previous periods having seen deflation.

EVEN IF OIL’S NOT WELL

Another issue being raised is that of ‘peak gold’, with echoes of ‘peak oil’. In a transcript of a radio broadcast of the Glenn Beck programme posted on 12 November 2009, Mark Albarian, president of Goldline International, explains that new mine production is down, most gold is being bought from Federal Reserves, and that mining companies are actually buying their gold back, all of which point to the nearing of peak gold.

This is mostly hot air. Gold, after all, isn’t burnt in car engines. “Peak gold is not on the cards for several reasons,” says Nadler, “First of all, there’s approximately 164,000 tonnes of gold above ground already in existence. That’s enough to satisfy better than four decades of demand at current levels.” According to him, while mine production was down in the 1990s and the early 2000s, there has been a 7 per cent increase in mine output through the first half of this year. This is due to increased investments in mining and transitional economies increasing their output of gold (along with demand).

The Reserve Bank of India (RBI) may have made news late last year with its purchase of 200 tonnes of gold from the International Monetary Fund (IMF). Globally, the reasons behind this major buy are mere speculation at this point, but Reuters recently made several guesses. One is that India is trying to diversify its reserve holdings, which are currently overweight on the oversupplied US dollar. Another possible reason cited is that India is trying to gain greater representation at the IMF. Nobody, though, is willing to hazard anything about what the country’s central bank sees on the horizon and how rational is its glow.