The Audacity of Ignorance 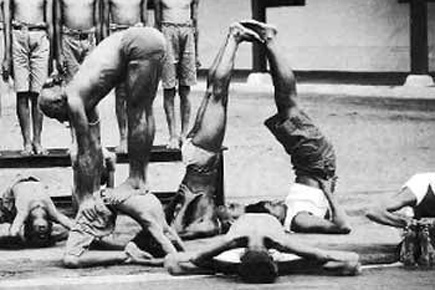 The Hindu American Foundation (HAF) started a conversation on the deepening American embrace of yoga with letters to magazines and a position paper nearly a year ago. Struck by the disconnect between “Hindu” and “yoga”, HAF felt compelled to argue that delinking yoga from its Hindu roots was ahistorical, at best, and insincere and malicious at worst. The position struck a chord, and a debate with Deepak Chopra, a frontpage article in the New York Times, and a CNN segment later, more Americans are connecting the two.

Meera Nanda’s Open story alleging that Hindu texts have few asanas and that the yoga master Krishnamacharya borrowed most from European gymnastics is the latest salvo against HAF’s position, and mimics a similar rebuttal by Wendy Doniger. Nanda’s criticism of HAF’s ‘Take Back Yoga’ (TBY) campaign as being based on a false, non-existent history misrepresents TBY and maligns HAF as a casteist, sleazy political operation (Indo-American Lobby? HAF is neither Indian nor a political lobby). Where she makes relevant points about the Mysore Palace, she vastly exaggerates her case. Perhaps, as William Dalrymple said, Nanda is “overtly hostile to many expressions of religiosity.” Whatever her agenda, her audacious and flippant claims are both stunning and flawed.

What is Take Back Yoga?

Nanda concedes that American yogis say “Namaste,” quote from the Gita and play Kirtan music. Why then is she so bothered by TBY? TBY makes three key contentions:

1. Yoga is more than just asana

2. Yoga is rooted in Hinduism

3. The asana-based practice of yoga found in many Western yoga studios is inspired by the Hindu Hatha yoga tradition

An important spark for TBY came from the editorial practices of the influential ‘Yoga Journal’ magazine, which sees asanas as integral to a broader spiritual practice. So what’s the problem? The editors avoid the words ‘Hindu’ and ‘Hinduism’, but not ‘Christianity’, ‘Islam’ or ‘Buddhism’. Repeated references to Hindu teachings as ‘ancient Indian’ or ‘Yogic’ or ‘Eastern’ seemed disingenuous. ”Hinduism has a lot of baggage,” HAF was told. Similarly, Deepak Chopra calls his philosophy Vedic, Yogic, Advaitin, or Sanatana Dharma, but never Hinduism, which he calls “one-eyed” and “tribal.”

In this context, TBY asserts that Yoga is one of six orthodox Hindu darshanas and indispensable to the practice of Vedanta. Non-Hindus can practice yoga as a secular activity by limiting themselves to asanas alone, but many go further into chanting, meditation, kirtan and other Hindu practices. Another driver behind TBY is the attempt to create “Christian Yoga” by some Christians who are worried that Yoga is leading Americans to Hinduism. Other Christians oppose Yoga outright, but it is ironic that Christian leaders are more honest in acknowledging the Hindu roots of Yoga than Mr Chopra and Ms Nanda.

A Brief History of Asanas

Nanda is right that Hatha Yoga is not a monolithic 5000-year-old tradition, but requiring that everything Hindu be traceable back to Vedic times is ludicrous. Two traditions that Nanda elicits, the Natha Yogis—Shiva and Shakthi worshipping founders of Hatha Yoga—and TS Krishnamacharya of the Mysore Palace taught yoga in a way inseparable from Hindu traditions.

Nanda demeans the Natha Yogis as seeking only magical powers. But the three key hatha yoga texts tell a different tale. All three are dedicated to Lord Shiva and teach methods to obtain samadhi through yoga. Verse 4.113 of the 14th century Hatha Yoga Pradipika (Pradipika), written by Natha Yogi Svatmarama (whose name means “one who delights in the Atman”) emphatically states: “As long as the prana does not enter and flow in the middle channel and the vindu does not become firm by the control of the movements of the prana; as long as the mind does not assume the form of Brahman without any effort in contemplation, so long all the talk of knowledge and wisdom is merely the nonsensical babbling of a mad man”.
The Shiva Samhita (Samhita), written in 1300-1500 CE as a conversation between Shiva and Parvati, cautions at the start of Chapter V that material enjoyments are obstacles to emancipation; and the Gheranda Samhita (Gheranda), a 17th century text, proclaims the truth of oneness in Brahman (verse 7.4) and calls maya the greatest fetter, yoga the greatest strength, jnana the greatest friend and Ego the greatest enemy (verse 1.4). No paeans to magic here. Powers may accrue to yogis, but they are never the aim. Far from wanting to “banish the matted-hair, ash-smeared sadhus from the Western imagination”, HAF cherishes them as one of pluralistic Hinduism’s time-honored traditions.

Nanda argues that asanas, even pranayama, are not found in the Vedas. Inconveniently for her, the Maitrayaniya Upanishad presents a six-limbed discipline, including pranayama, virtually identical to Patanjali’s Ashtanga Yoga. She argues that while BKS Iyengar taught some 200 asanas, Pradipika listed only 15. Indeed, not all 200 existed at first, but a clear trend of development exists. Asana lists appear in the 6th-7th century commentaries on Patanjali’s Yoga Sutras by Vyasa (nine) and Shankaracharya (three), with “etc” following both lists, clearly indicating knowledge of more asanas. Shankara, who wrote before the three hatha yoga texts, also refers to “asanas mentioned in other shastras”. Pradipika 1.33 says: “84 asanas were taught by Shiva. Of those, I shall describe the essential four”, and Samhita 3.84 says: “There are eighty-four postures, of various modes. Out of them, four ought to be adopted, which I mention below”. This indicates that at least 84 were known by the 14th century. Finally, the Sritattvanidhi (early 1800s) illustrates 122 asanas.

The crux of Ms Nanda’s allegation is that Krishnamacharya built on the Sritattvanidhi by borrowing from European gymnastics. First, its unclear the number of Krishnamacharya’s innovations that were inspired by his guru versus gymnastics. His first writings featured vinyasas (sequences of asanas synchronised with breath) that he learnt from his guru, illustrating that the Guru-shishya parampara always had teachings not available in texts. Ms Nanda cites Mark Singleton’s observation that “at least 28 of the exercises” in Bukh’s manual are strikingly similar to yoga postures taught by Krishnamacharya’s students, Pattabhi Jois and BKS Iyengar. But even if their combined repertoire has asanas that are “similar” to gymnastics, is that enough to deny Yoga’s Hindu roots? Rather, Singleton in his book points out that his comparison should not be construed as evidence of Krishnamacharya’s having borrowed directly from Bukh, and in fact names an equally influential Indian tradition of Swami Kuvalayananda, with whom Krishnamacharya spent time. Singleton concludes that “This does not mean… posture-based yogas….are “mere gymnastics” nor that they are necessarily less “real” or “spiritual” than other forms of yoga.”

Norman Sjoman, whom also Nanda mentions, states in his book that Iyengar’s 200 asanas are found in two independent yoga traditions. “The asanas themselves are not unknown, for a similar set of asanas with different names was shown by Swami Vishnudevananda, published in his book The Complete Illustrated Book of Yoga. He was a student of Swami Sivananda, a Dravidian belonging to the Dikshitar family, the traditional guardians of the Chidambaram temple. He must have inherited their traditions. Swami Yogesvarananda brought out a book in 1970 titled First Steps to Higher Yoga containing 264 asanas”.

Many yoga traditions popular in the West, such as the Yogoda System of Paramahamsa Yogananda (from which the Bikram School of Yoga is derived), Yogi Bhajan’s Kundalini Yoga, and Satchidananda’s Integral Yoga are not in Krishnamacharya’s lineage. Also not examined: the 108 dance poses of Shiva containing many vinyasa movements. The Indian Government has created the Traditional Knowledge Digital Library, an effort being coordinated by the Council for Scientific and Industrial Research, to prevent patenting of Yoga. Thus far, they have documented 1,300 asanas with the cooperation of nine traditional yoga institutions.

TBY is succeeding in its quest to link yoga with the Hindu spiritual tradition from whence it comes. This is not a facile claim of ownership. Rather TBY roots this practice within its metaphysical framework that practitioners eventually discover on their own. Om Shanti.

The author is Member, Board of Directors, Hindu American Foundation