Nepal Earthquake: Ready for the Big One?

Science warns us against complacency 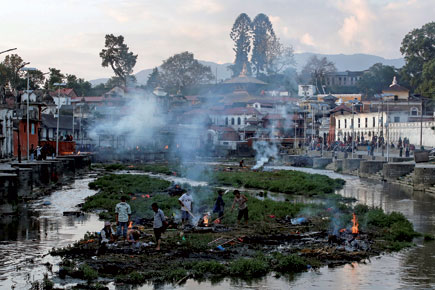 It is a grim reminder once again for people who reside in the developing world to either heed nature’s warning or perish. As the clock ticked its way to noon on 25 April, Nepal was rocked by violent jolts generated by a 7.9 magnitude earthquake, claiming over 4,000 human lives, including at least 100 in India. There are fears that the eventual toll could be as high as 10,000.

The Earth, being a dynamic planet, constantly moves its rigid upper lithosphere, also known as a tectonic plate, over a more mobile asthenosphere. During these motions, different plates collide and create collision zones which form the locales of great earthquakes exceeding magnitude 8.0. The Nepal earthquake occurred in the Himalayan collision zone formed due to the continuous northward movement of the Indian plate that collided with the Eurasian plate around 40-50 million years ago. The movement of the Indian plate creates geological stresses along the entire 2,600-km belt of the Himalayas, which are released periodically by way of earthquakes along certain segments. Over the past century or so, the mountain range has experienced four such great earthquakes— in Himachal in 1905, on the Bihar-Nepal border in 1934, in Arunachal Pradesh in 1950, and in Shillong in 1897—apart from several others of magnitude between 6 and 8.

Hence, the occurrence of this earthquake in the Nepal Himalayas was not a surprise. Further, four events of 6 or greater magnitude have occurred within 250 km of the 25 April earthquake over the past century. A 6.9 earthquake occurred 240 km southeast of the latest event in August 1988, claiming 1,500 lives. The largest earthquake in the area occurred in 1934, one of 8.1 magnitude that caused severe damage in Kathmandu and killed about 8,500 people.

The 25 April earthquake occurred along an east-west thrust fault at a depth of 15 km and cracked a fault length of about 150-170 km as estimated from the distribution of aftershocks. The fracture was unidirectional and propagated from west to east. The location, size and focal mechanism are consistent with its occurrence on the main subduction thrust interface between the Indian and the Eurasian plates. Because of its shallow depth, the damage was most severe within an area of about 120×50 sq km, although the earthquake itself was felt as far as distances of 1,500-2,000 km. Forty aftershocks in the magnitude range of 4.1 to 6.7 followed the main quake within 48 hours, which is again consistent with the pattern of a great earthquake. The aftershocks will decay slowly over a period of time with reducing intensities.

In the recent past, scientists have warned of an impending great earthquake in the central Himalayas using GPS measurements, which showed crustal stress build-up in the Nepal Himalayas. The magnitude of such an earthquake occurring in this region was estimated to be between 8.5 and 9.0. Though the 25 April earthquake was smaller in magnitude and farther east of the expected region, it amply demonstrated the efficacy of such studies. However, with the existing technology and present state of knowledge on earthquakes, it is not possible to pin- point the area of a future earthquake.

The big question is whether the Himalayas have the capacity to generate a magnitude 9.0 earthquake as predicted or expected. In the recorded history of earthquakes on Earth, there have only been six of magnitude 9.0 or more. Two of them, which occurred in 1946 in the Aleutian Islands and in 1952 in Kamchatka, have now been downgraded to below 9.0, as per the United States Geological Survey (USGS) catalogue. This fact apart, it should be noted that all these six earthquakes occurred along subduction zones created by ocean-continental plate interaction and not continent-continent collision zones like the Himalayas.

In an interesting study in 2008, Robert McCaffrey, a New Zealand seismologist, simulated the recurrence of magnitude 9.0 earthquakes based on the length of trenches and convergence rates, and suggested that the global occurrence rate of 9.0 earthquakes is one to three per century, and the five that occurred in the past hundred years may outnumber long-term averages. This means that the occurrence of such an earthquake in the Himalayas in the near future may be an overestimate on two counts: one, that no such event has ever occurred along a continent-continent collision zone, and two, that we have already experienced five earthquakes of magnitude 9.0 or more in the last 65 years, which is above the long-term average. These are, however, open questions that cannot be answered with conviction for a long time to come, since our records are not long enough to observe the processes generating these super- great earthquakes.

What message can one take home from Nepal’s 25 April quake? A great earthquake of magnitude 7.9 or more in the Himalayas should not be taken as a surprise or an abnormal event since this belt is one of the world’s most seismically active regions. The earthquake risk, which is a combination of tectonics, geology, human population and the quality of houses and construction practices, is very high in the Himalayas.

The damage in Kathmandu was very heavy since it is located in a valley and filled with sediments. Whenever a strong earthquake strikes, the damage will be severe in the epicentral zone due to static displacement, strong shaking and liquefaction, where foundations get affected. Serious damage in case of great earthquakes can also happen up to 400 km away in areas filled with a thick pile of sediments, as this amplifies the transient seismic waves and induces intense shaking. For example, in the Bhuj earthquake of 2001, several buildings in Ahmedabad collapsed in spite of being 350 km away from its epicentre. Thus, from the Indian point of view, major cities and townships in the Indo-Gangetic plains comprising sediments of varying thickness from 500 metres to 4 km— like Chandigarh, Dehradun, parts of Delhi, Lucknow, Kanpur, Allahabad and Patna—are at very high risk of devastation on account of a great Himalayan earthquake. It is pertinent to point out that unless proper preparedness measures are undertaken, the story will repeat itself when the next big one strikes.

(RK Chadha is a seismologist and chief scientist at the CSIR-National Geophysical Research Institute, Hyderabad)