Returning to the heart of sorrow 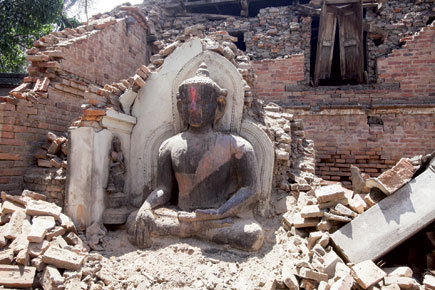 I have been to Uttarakhand in 2013 as part of relief operations after flash floods there devastated the region. Last year, when Kashmir got inundated, I decided to go there to help out in whichever way possible. On both occasions, the catastrophe happened over a thousand kilometres away before I decided to get involved. The Nepal earthquake, however, almost found me.

On 1 April this year, I was on an afternoon flight from Delhi to Kathmandu, excited at what lay ahead. Some of my friends were going to scale Mount Everest. My plan for the first two weeks of April was to trek with them till the Everest Base Camp (5,300 metres above sea level), and then wish them luck and come back. I got acquainted with a number of tourists going for a holiday to different parts of Nepal, and reached Kathmandu on time. The city was welcoming as always, and the hike to the Base Camp was as promised—breathtaking views and the interesting company of mountaineers and trekkers from across the world. Once there, I bid farewell to my Indian climber friends who were to scale Everest and returned to Kathmandu on 15 April. I stayed on in the city to do some touristy stuff and returned to India on 23 April, still reminiscing about my trip and the friends I had made.

The afternoon after next, I got a call from a friend who said there had been an avalanche at the Everest Base Camp. I switched on the news and realised there had also been an earthquake. In the morning, a friend of mine had posted a message on Facebook saying that he was at Mumbai airport and going to Kathmandu to embark on a Himalayan trek. He had asked about places to eat and things like that, and many of us offered recommendations. When I got to know of the earthquake, I immediately thought of him and tried to find out whether he had touched down there. To my relief, his flight had not landed. He would be safe. But soon, the horror of the earthquake gradually began to make itself apparent.

My friends and family said that I was lucky to be back in the nick of time, and for a moment, even I thought of my timing as just right. But then I began to feel miserable. I wasn’t too happy being back and feeling helpless, knowing that so many climbers and trekkers, including my friends, were stuck in the upper reaches of Nepal. It had been the season for trekking and mountaineering, and their numbers would run into thousands.

That was when I decided that I had to go back, find news of my friends and also do whatever I could to help within my capacity and reach. On 28 April, I was once again on a flight to Kathmandu. How different the environment was aboard the plane! Where there had been the happiness of tourists earlier, this time there was only anxiety and perturbation written on the faces of my co-passengers. The flight was mostly filled with locals going home to their near ones, some climbers and a few search and rescue teams from the US, Israel and other countries. The man sitting next to me was Tul Bahadur Tamang, a young Nepali on his way from Doha to attend the funeral of his grandfather and cousin sister. He told me that they had succumbed to the earthquake when one part of their house in a village came down like a pack of cards. Tamang had been coming to the airport for the past two days, but could not get an earlier flight home as airline operations were stalled for various reasons, including bad weather. It was sad. On my first trip, it had taken 30 minutes for my baggage to get cleared and for me to head out of the airport terminal, but this time it was a picture of chaos with bags getting delayed by as much as a day. But, strangely, outside the airport, there was little sign of the catastrophe. When I was in Srinagar during last year’s flood, I could see knee- deep water all over on my way from the airport to the city. But here in Kathmandu, the destruction along the route from the airport to the city seemed muted. There was a huge ground where tents were pitched, but no destroyed buildings around it.

Kathmandu seemed to defy the images that TV channels had been beaming of being ravaged. The real destruction, I have learnt, starts 50-60 km from the capital city, where villages have been completely devastated. Reaching there is still difficult because the roads are in bad shape. I got a call from a village 100 km from Kathmandu and was told that they had food but needed tents and medical supplies.

The next day, I went to Pashupatinath temple, but it was a depressing sight with all the cremations around. We came back on the main road, and it seemed like normal life in Kathmandu—buses, trucks and taxis were plying and people appeared to be trying to get back to their routines.

Thamel is a hub for mountaineering, and April, when it is season, turns it into a vibrant place. But it was silent now—with many cafes and shops closed and a marked absence of foreigners. One six-floor hotel had completely crumbled. Twenty-six tourists from Assam who had come to visit the Pashupatinath temple had just checked in half an hour before the earthquake. Six of them died and one woman’s whereabouts are still unknown.

Thamel has the office of Asian Trekking Company, where I enquired about friends who were on Everest expeditions. They told me that they had nine Indians climbing Mount Everest, but all their climbers were safe and at Base Camp. They had 16 climbers (seven of them Indians) climbing from the Nepal side, south of Everest, and 24 (two of them Indians) from the China side in the north. The sherpas leading the expeditions made sure of their safety, their whole focus being to get them back to Base Camp, because once there they could trek to places from where helicopter rescue sorties were being carried out.

The starting point of the Everest Base Camp trek is Lukla, and my preliminary information after speaking to local friends and climbers stuck in places like Gorakshep, Dinghboche, Namche Bazaar en route to the Base Camp says that helicopters are in the process of rescuing them. Small Dornier planes are also being used now to ferry them to safety. Most of those who are fit enough to walk have started their descent to Lukla.

I spoke to the Himalayan Rescue Operation and found that the weather is good, fortunately, and operations are on to evacuate as many as possible. Many climbers are still camping at the Base Camp in the hope of being able to scale Mount Everest. Agencies let clients take a call on whether they want to be evacuated or stay put. That is, if the Nepal government does not declare the season officially closed. That some climbers are still keen on going ahead with the climb, I am told, is because they fear losing the Peak Royalty fees of $11,000 that every climber has to pay to climb Everest.

As Nepal grinds itself out of the chaos, one of the most worrying aspects is that at present there is only news about people who had been out to climb Everest. But there were many expeditions on other mountains in Nepal. We have little information on those. All of these mountains are full of trekkers. At the moment, no one is sure if they are missing or have reached a safe zone and are unable to call due to poor connectivity.