Muslim in America: The New Stigma

With Congressional hearings on radicalisation looming, Islamophobia is on the rise in the US 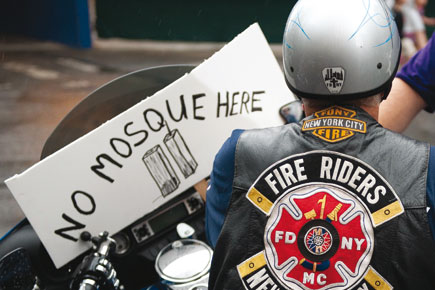 With Congressional hearings on radicalisation looming, Islamophobia is on the rise in the US


Newly-elected representative Allen West, a Republican from Florida, appeared on the right-wing radio show of Frank Gaffney earlier this month. He had campaigned last November on an anti-Muslim platform, suggesting at one point that US President Barack Obama was a member of the Muslim Brotherhood. Gaffney asked the Congressman how the US government might address the threat of domestic terror. “There is an infiltration of the Sharia practice into all of our operating systems in our country as well as across Western civilisation,” said Republican Representative West. “We must be willing to recognise that enemy… I think that is our most threatening part—the Sharia philosophy.”

Nearly ten years after the 9/11 attacks, a wave of Islamophobia is cresting across the United States. Acts of prejudice traceable to creeping anti-Muslim sentiment include arson attacks on mosques and campaigns to stop their construction, highlighted by the dust-up last summer over the so-called ‘Ground Zero mosque’ in downtown Manhattan.

Several states have moved to ban Sharia, though no religious group whatsoever had proposed enacting this Muslim code of law. The New York Times reports that Muslim job discrimination claims have increased 60 per cent since 2005. Over a similar period, favourable views of Islam among Americans fell more than 25 per cent, according to a Pew survey. The Florida priest who sparked global outrage with his plan last year to burn a copy of The Quran is now looking to put the Muslim holy book on trial.

Peter King plans a still more ambitious trial. The US Representative and new chairman of the House Committee on Homeland Security wants hearings held in February on increasing radicalisation among American Muslims. “I will do all I can to break down the wall of political correctness and drive the public debate on Islamic radicalisation,” says King.

King may not be the ideal person to lead these hearings. The 66-year-old has represented New York’s Third Congressional District since 1992. During his first decade in the House, he was a moderate Republican—one of the few to back the Clinton Administration’s Balkan interventions that sought to protect Muslims, and speak out against Clinton’s impeachment. As a result of his backing of Republican maverick John McCain in the 2000 presidential election, King was marginalised during the first months of the Bush Administration.

All that changed on 11 September 2001, when over 150 residents of King’s Long Island Congressional district lost their lives in the World Trade Center attacks. King transformed himself into an anti-terror hawk. He threw his full support behind the Patriot Act and wars in Iraq and Afghanistan, and later spoke out against the closure of the Guantanamo Bay detention facilities.

In 2004, he told Fox News that “80 to 85 per cent of mosques in this country are controlled by Islamic fundamentalists”. This is a figure he has repeated numerous times without evidence. In fact, a study conducted by professors at Duke and North Carolina last year concluded that, because of youth programmes, anti-violence events and teaching methods aimed at countering extremism, mosques actually deter the spread of militant Islam and terror.

Before the hearings begin, King plans to appear on a new cable TV show of Brigitte Gabriel, founder of the anti-Muslim group Act for America. Gabriel says she does not trust Muslims and maintains that “tens of thousands of Islamic militants now reside in America”.

That number is far-fetched, even if the domestic threat from radicalised Muslims has risen. As recently as 2007, observers noted the lack of radicalisation in the US as compared to several European countries—a result, some posited, of America’s great melting pot.

But several incidents have altered that narrative: particularly the cases of Najibullah Zazi, an Afghan native who plotted to detonate explosives in the New York City subway; Nidal Hassan, the US Army major who allegedly shot 13 people at a base in Fort Hood, Texas; and Faisal Shahzad, an American citizen trained in Pakistan who tried to detonate a car bomb in Times Square in May 2010.

King says he will focus the hearings on these incidents, as well as the arrests of ‘potential Muslim terrorists’ in Texas, Illinois, Virginia and other states. Witnesses are likely to include law enforcement officials and critics like Ayaan Hirsi Ali, the Ethiopian-born former Dutch Parliamentarian who has spoken out strongly against Islam.

Ibrahim Hooper, spokesman for the Council on American-Islamic Relations, worries that the hearings will “further marginalise American Muslims and demonise Islam.” But M Zuhdi Jasser, a physician, former US Navy lieutenant commander and founder of the American Islamic Forum for Democracy, sees it differently. ‘Attention to this issue offers an opportunity for American Muslims to confront the radicalisation problem and provide solutions—as only they can,’ Jasser wrote in a New York Post op-ed.

Yet, Muslims have been confronting the problem, tipping off authorities in as many as a third of all foiled terrorist plots. It was a Senegalese Muslim vendor who brought the smoking car in the Times Square plot to police attention. It was underwear bomber Umar Farouk Abdulmutallab’s own father who had warned the FBI of his extremist views months before the attempted attack. And last July, nine prominent American Muslim scholars denounced radicalism and terrorism in a widely watched video.

The Muslim-bashing among conservative politicians like West and King may be less a reflection of reality than a means to conveniently demonise the enemy as the US wages wars in Iraq and Afghanistan and extends bombing campaigns in Yemen and Pakistan. If Muslims are bad, the theory goes, we need not feel guilty about killing them.

Martin Peretz, editor of The New Republic, toed that very line in an article last September. ‘Muslim life is cheap,’ he wrote, ‘I wonder whether I need honor these people and pretend that they are worthy of the privileges of the First Amendment, which I have in my gut the sense that they will abuse.’

You can draw a straight line from there to the King hearings, which are unlikely to be fair and balanced. “Most Americans, including Muslims, would be unopposed to fair, unbiased and effective procedures and meetings to curb radicalisation and extremism in our country,” says Wajahat Ali, a playwright and associate editor of altmuslim.org, a news-and-analysis website, “But it seems Representative King and his cronies are casting a wide, broad net over all Muslims and lumping them as potential suspects and stealth jihadists.” He is reminded of the McCarthy era, America’s great Red Scare of some 60 years ago. That age of fear was inspired largely by Wisconsin Senator Joe McCarthy, whose political career has some parallels with King’s.

In mid-1949, as part of a Senate subcommittee, McCarthy took a highly unpopular stance, lobbying for the commutation of death sentences for German soldiers convicted of war crimes for killing American prisoners during World War II. He cited judicial misconduct amid rumours that American soldiers tortured their prisoners to extract confessions. Within weeks, the Senate press corps voted McCarthy ‘the worst US senator’ in office at the time.

Just months later, McCarthy seized the chance to make political capital by hitting on the hot-button issue of post-WW II America: fear of the Soviet Union. He delivered a speech to a women’s club in Wheeling, West Virginia, in which he claimed to possess a list of dozens of known communists working in the US State Department. A dark era of fear and paranoia followed, during which the House Un-American Activities Committee held hearings on whether hundreds of Americans—federal employees, activists, scientists, artists and others—were affiliated with the Communist Party.
McCarthy never did present his list, yet the impact of his threat was enormous: from 1950 to 1954, as many as 12,000 Americans lost their jobs. Stigmatised as infidels and traitors, they had become essentially untouchable as a result of their association with communism, regardless of whether the accusations were ever proven accurate.

Both McCarthy and King saw an opportunity to gain political traction by playing on fear and unfamiliarity, the truth be damned. Neither man created their moment, merely exploited it. If the US hopes to avoid another great scare, its political leaders would be wise to recall the words of Edward R Murrow. “We must remember always that accusation is not proof and that conviction depends upon evidence and due process of law,” the suave, cigarette-smoking TV newsman said during a March 1954 broadcast that marked the beginning of the end of McCarthyism. “We will not be driven by fear into an age of unreason.”