A commando attack that killed ten of an activist group delivering aid to Gaza has shocked both friends and foes of the Jewish state. 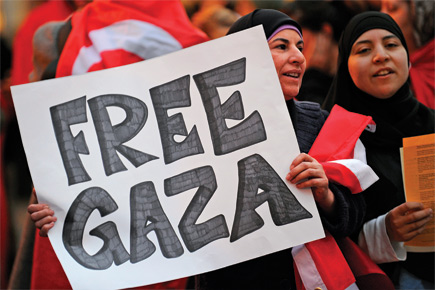 A commando attack that killed ten of an activist group delivering aid to Gaza has shocked both friends and foes of the Jewish state.


JERUSALEM — Israel’s tendency to score own goals and its insistence on disproportionate responses, no matter the size and nature of the provocation, has its supporters squirming. Everything here becomes a test of Israeli sovereignty, about its right to exist, about its might to overcome those who challenge its strident policies. As if the Middle East chessboard weren’t complicated enough without the latest Israeli military action.

Last week, the world collectively gasped when Israeli commandoes stormed a flotilla laden with aid for Gaza off its coast, killing at least ten people, in a botched operation. The pre-dawn attack seemed more like a trigger-happy response than a legitimate effort to block the ships. The flotilla had 10,000 tonnes of humanitarian aid, including cement and glass, which Israel has barred since its attack on Gaza in December 2008 to prevent the rebuilding of homes in this besieged coastal strip populated with Palestinians. The ships were in international waters when they were attacked in clear violation of international law. Furious condemnation by the UN, EU and Arab League followed.

The diplomatic fallout has been swift and intense, isolating Israel further in world opinion. World leaders called the attack “an overreaction”, and demanded an independent investigation. True, Israel had made it clear it would stop the ships, but no one expected blood spilt. Normally, international groups aboard a flotilla are detained and deported, sometimes even allowed to deliver aid.

The latest fiasco has given Israel’s enemies such as Iran more ammunition, while disarming its shrinking set of friends. The raid also highlights Israel’s unsustainable policy of blockading Gaza only to punish Hamas, the Islamist organisation that won the 2006 Palestinian elections. But it has turned Gaza into what many call the world’s largest open-air prison, with Israel and Egypt guarding its two ends (the latter easing up only now). Richard Falk, UN special rapporteur on human rights in the Palestinian territories, called the siege on Gaza “a crime against humanity” and said the global campaign for boycotts and sanctions against Israel was now “a political and moral obligation”.

Israel’s efforts at damage control fell flat, failing the ‘laugh test’, according to the liberal news website Mondoweiss. An Israeli spokeswoman described the people on the ship as a “lynch” mob determined to hurt Israeli commandoes. Defence officials released a video clip showing how Israeli soldiers were attacked with metal rods and knives. The clip went viral on YouTube, as did footage of injured activists. Israeli officials also claimed that the Free Gaza Movement, the group behind the flotilla, had links with Al Qaida and posed a security threat. In reality, the 700 activists from 40 countries included bestselling Swedish writer Henning Mankell and a former US ambassador, Edward Peck. Mairead Corrigan-Maguire, a Nobel peace laureate from Northern Ireland, was supposed to join but could not.

The tragedy is that Israel’s word is no longer gold, even in the US where it normally enjoys carte blanche support. J Street, a new US Jewish lobby, asked for an independent inquiry into the incident and called the blockade “counterproductive”. Bradley Burston, a columnist for the liberal Haaretz newspaper, saw the siege as ‘becoming Israel’s Vietnam’.

Israeli Prime Minister Benjamin Netanyahu had to abandon his trip to Washington and return home from Canada to sort out the diplomatic mess. Across the world, the damage was palpable. Israel’s military action against pro-Palestinian activists trying to deliver aid to Gaza cannot but harm the Middle East peace process, complicating US efforts to restart substantive negotiations. It could reduce the flexibility of Palestinian Authority President Mahmoud Abbas, already struggling to deliver.

The old city of Jerusalem wore a deserted look Monday morning, as scores of tourists gaped at downed shutters and empty lanes. Palestinians in East Jerusalem blocked roads and burnt a few tyres to express their anger. Tensions with Israel’s 1.3 million-strong Arab minority, which feels Palestinian but holds Israeli citizenship, are bound to rise. Some Israeli politicians already see them as a fifth column, and the presence of two Israeli Arabs in the flotilla cannot help.

As for wider ripples, Israel’s relations with Turkey, once its most important friend in the Muslim world, have gone into a freefall. Most victims of the attack were Turkish, prompting Turkey’s Prime Minister Recep Tayyip Erdogan to denounce it as “state terrorism”. He recalled his ambassador and cancelled military exercises as an opening salvo. Thousands of Turks protested angrily outside the Israeli consulate in Istanbul.

Turkey, a bridge between Europe and the Middle East, recorded $2.5 billion in trade last year with Israel, but has been openly moving away since Israel’s three-week pounding of Gaza 18 months ago, which left more than 1,300 Palestinians dead, many of them children. No longer shy of asserting its Muslim identity, Turkey has softened towards Iran and Syria, even working out an agreement on Iran’s nuclear stockpile much to the chagrin of Israel and the US.

Israel’s action did not help its many friends in the US either. The ‘special friendship’ between the two has been under strain over the issue of illegal Jewish settlements on Palestinian land. Analysts say that President Barack Obama was already frustrated by Israeli attitudes and now must deal with this military outburst. But it may force him to squarely face the question of how to deal with Hamas and draw it into the peace process. Europe and the US so far have been content to deal with the Palestinian Authority, which controls the West Bank, without figuring out a way to reconcile the Hamas-Fatah divide.

The Israeli action will also complicate Obama’s attempt to impose new sanctions on Iran through the UN, which is now focused on formulating a response against Israel. The Arab countries will no doubt exert pressure on the US to take a stand and even some action. Analysts say Washington might consider an ‘abstention’ rather than a blanket negation of all UN resolutions condemning Israel. Israel is the largest recipient of US aid, to the tune of $3 billion a year, but few have the gall to use that lever.

For Netanyahu, the global uproar is the second major diplomatic crisis since he assumed charge of a right-wing coalition. It comes after Mossad agents were implicated in the assassination of a Hamas leader in Dubai on 20 January using fake British, Australian, German and French passports; expulsion of Israeli diplomats followed. European governments are again enraged because many of their citizens were aboard the ships.

Israel has to choose between further isolation or a policy change.