The story of an unlikely Christian channel in Pakistan. If going on air was difficult, staying on air is something of a miracle. 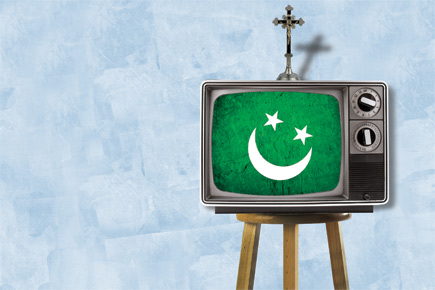 The story of an unlikely Christian channel in Pakistan. If going on air was difficult, staying on air is something of a miracle.


As hardened reporters, we would often joke in our newsroom that we would one day open a channel that would only air news brimming with optimism, to the point of being sickening. Imagine our surprise and dismay when we hear of a channel launching by the name of Good News TV. While ruing our loss that someone had beaten us to the idea, it was next at a lunch with provincial ministers of the Sindh government that the channel came up for discussion. A guest at the lunch laughed at the name, and was informed by a minister, “It’s run by our Christian brothers,” which was met with silent nods and aahs. The conversation moved on, but the name lingered in one’s memory.

Pakistan’s Christians, estimated at about 1.8 per cent of the country’s 180 million population (although Christian leaders put that figure at 3 per cent), have been treated with anything but the freedom and tolerance promised by Pakistan’s founder Mohammad Ali Jinnah. In 2009, Christians were injured and houses were burnt down in riots in Gojra, Punjab, after a rumour spread that a Quran had been burnt by a Christian. Every year, Christians are arrested and jailed on charges of blasphemy under the Blasphemy Ordinance. Still others are targeted on the basis of their religion, with two brothers killed in Faisalabad earlier this year on account of their religion: Christianity.

In the midst of this doom and gloom, it sounds ironic that a Catholic priest would start a channel called Good News TV. Airing all over Pakistan since December 2009, it offers a mix of entertainment, news, infotainment and religious programming.

The man behind it is anything but the stereotypical head of a broadcast venture. Soft-spoken Father Arthur Charles, a 53-year-old priest, meets me at the Catechetical Centre in the heart of Karachi, where he provides lectures, seminars and training to Catholics. Clad in a muslin shalwar kameez, Father Charles is quick to point out that Good News TV is not just a Christian channel. “We have entertainment programming, talk shows and top-of-the-hour news. We only have three hours worth of Christian programming, which is in the morning and evening.”

For Father Charles, starting Good News TV had been a childhood dream, spurred on by the fact that state-run TV would feature Christians only twice a year, “for 30 minutes, every Easter and Christmas”, he says with a touch of resignation in his voice. “I also wanted to be able to proclaim my religion, to give my people some pride.” Even with the last decade’s proliferation of private news channels, Christians are rarely featured except in the context of two extremes: on religious occasions, where reporters are asked to portray Christians as having absolute freedom of religion, and in cases of violence against Christians, whether in the form of assassinations or riots. Most Pakistani TV show hosts are Muslim, as are the majority of the staff working at local news channels.

The priest got his immediate inspiration for starting Good News TV from across the border. “Sonia Gandhi once said that ‘We will win the war against Pakistan through media’, and they [Indians] have done that. What I liked about their shows was the interfaith harmony, and that every drama was centred around puja and the mandir.”

Determined to get the channel onto airwaves, Father Charles found that he had to deal with a mesh of bureaucratic red tape. First, he had to convince the Pakistan Electronic Media Regulatory Authority (Pemra) to issue a licence for a TV channel. “People used to tell me, ‘It’ll be very hard.’ Or ‘You’ll show Christian programming and try to convert Muslims to Christianity’. I told them that they should treat me as a Pakistani, not as a Christian. I also explained to them that we’ve been working in hospitals and we run some of the most prestigious schools in Karachi, like St Patrick’s School and St Joseph’s. I asked them, ‘Have you ever heard of someone being asked to convert there?’ These schools have had students like former President Pervez Musharraf and his wife Sehba!”

Another point that Father Charles makes is that Pemra has no rules regarding religious channels, yet nearly half a dozen are in operation. Having convinced the regulatory authorities to treat him as a citizen of Pakistan and that Good News TV was not solely a Christian channel, he began the fund-raising process. “I didn’t have a single rupee when I started the project. We began appealing to people, and women from lower-income areas gave us their earrings and bangles. We get funding from another Christian locality in Landhi, Karachi, where every earning member of the family gives us [Pakistani] Rs 500 a month, without fail.”

The channel does not get any state funds at the moment, but is supported by the Archdiocese of Karachi. Yet, several Christians in the city are yet to hear of the channel. “Have you ever seen Good News TV?” I ask Catherine Jan, a Catholic Christian who works as a maid in Karachi. “No,” she quickly replies. “It’s a channel set up by a Catholic priest of yours,” I inform her, hoping to jog her memory. “We don’t get it on TV. Our cable operator shows us hymns and carols during Christmas.”

Roger Stephens, a Christian employee at a restaurant in Karachi, is also unaware of the channel. “If they’re showing prayer services, that’s not right,” he says on being told about it, “I bet the pastors are saving their fuel costs—they probably think, ‘Hey, we can just sit here and preach, and people don’t have to come to church either, they can just watch it on TV’.” This sentiment is echoed not just by Christians, but also by Muslim viewers in Karachi. Hasan Zaidi, a filmmaker and an avid watcher of local news channels, also says he’s never heard of the channel.

Trying to take a picture of Good News TV playing on local cable networks is another ordeal altogether. Most cable operators are not running the channel. Adil, a harassed salesman at a store selling TVs in an electronics market, surfs the tuning-band spectrum for five minutes before he finally manages to find it. “I’d never even heard of the channel before you walked into our store,” he says, partly by way of explanation.

Father Charles says that some local cable TV operators were not running the channel, assuming it was a Catholic affair (or demanding bribes to air it). In Pakistan, local cable TV operators function like a mafia network, often dropping channels under pressure from politicians. Pemra, however, says that Good News TV does not have a licence to run in Pakistan, which is why the channel is off air. “There are 2,500 cable TV operators, and we can’t monitor every single one, so we don’t know if it’s still airing,” says Wakeel Khan, general manager of Pemra’s technical department, “Previously, other than Karachi, Good News had not been airing in any other city. If you check on our website (pemra.gov.pk), you’ll see that they’re not on the list of channels that have landing rights.”

A quick check at the website confirms that Good News TV does not have a landing licence. Mohammad Tahir, Pemra’s public relations officer, and Wakeel Khan are both unaware of the content of the channel. Sherry Rehman, member of parliament and former minister for information and broadcasting, is also unaware of it, but says that channels can be broadly religious but not sectarian. “If one religion can preach, then why can’t the other? As long as it’s peaceful and not inciting violence, I don’t see any problem, but they need to go through the regulator—that is, Pemra.”

Father Charles’ main motive appears to be not just giving his community something to be proud of, but also to promote good causes in Pakistan, a gargantuan task considering the abundance of bad news in the country—from floods to wars and much else inbetween. One subject close to Father Charles’ heart is interfaith harmony. “We have a staff of 80 people, and have Christians, Hindus and Muslims working together. I even had a Parsi girl, but she had to leave for some reason. We eat, drink and work together, and my staff also helps clear any misconceptions that outsiders might have about the channel.”

At the modest offices that pass for the channel’s headquarters, the staff greets Father Charles with deference as he walks in. Pictures of the Pope, Mohammad Ali Jinnah and Archbishop Pinto adorn the walls. Here, it is hard to imagine Father Charles as a priest, as he asks his staff about new channel IDs, enquires about shifts and sets up meetings. “I’ve worked at different channels,” says Sohail, part of the technical staff, “but since this is a new channel, we’ve had the chance to learn from everyone, including Father Charles.” This sentiment is echoed by Shazia, who works as a newscaster. “I have learnt so much while I’ve been here,” she says, having earlier worked at Pakistan Television as a host. As I take pictures in the studio, another anchor, Hira, reads off headlines for the news bulletin. Employees say that while programming isn’t geared around Christianity 24/7, some people did have the impression of it being a “Christians’ channel” in the beginning.

Considering the precarious security situation and targeting of Christians in Pakistan, it is a minor miracle that Good News TV has managed to stay on air for nearly eight months now. “We’ve had some veiled warnings, but I don’t take them seriously,” says Father Charles, “If people don’t like the channel, they have a remote and they can switch to something else. The people in Pakistan are generally very good. There’s only a small fraction of people who do these things.” The Karachi headquarters currently has a few private security guards posted outside, but no police protection.

“The plan is that we bring harmony and love and tolerance. And that good news reaches every house, so that people can do good for the community. Good News should also bring dignity to my people, [assuring them] that we have a place, and also preach the message of Jesus Christ. Muslims also believe in Christ, and I have a tool to tell people what he taught: love, forgiveness and peace.” Three elements that Pakistan is in dire need of right now.