For a Greater Say at the IMF

BRIC countries have agreed to provide the Fund with money to bail out Europe’s crisis-ridden economies. Here is why 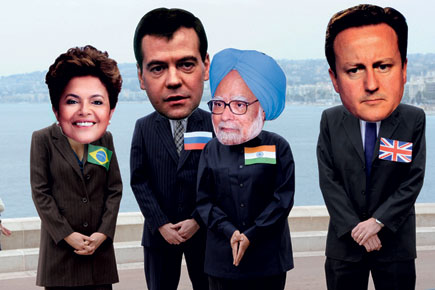 BRIC countries have agreed to provide the Fund with money to bail out Europe’s crisis-ridden economies. Here is why


On the face of it, nothing much may have come of the G-20 summit held last week, but with the developed world faltering in its battle to save struggling European economies, an opportunity seems to have opened up for emerging economies such as Brazil, Russia, India and China (‘BRIC’, as the moniker goes). They have agreed to extend help through the International Monetary fund (IMF) to eurozone economies in need of money.

There are several reasons why this decision makes sense. For one, money routed through the IMF is far safer than extending bilateral loans that could go bad. For another, in return for the money, the BRIC economies are hoping for greater clout at the IMF. “By helping out Europe now, [these emerging economies] will increase their negotiating clout at the IMF [through an enhanced voting share] and World Bank, and at the current Doha Round of the WTO,” says Matthias Matthijs, assistant professor of political economy at Johns Hopkins University.

Much depends on the mechanism that is finally settled upon for routing this money via the IMF. If, in lieu of the money given to the Fund, these countries get larger voting rights, then India would be pleased to participate in the process. “It would not like to be overtaken by others and let its share of voting go down,” says an expert. But if an alternative mechanism of a ‘special purpose vehicle’ (SPV) is set up under the IMF, then India’s approach would be relatively cautious. An SPV would likely be funded by the foreign exchange reserves that many emerging economies have. But not all are free to deploy them so easily. “Much of India’s reserves are not owned but borrowed. They would be owned if they were the result of current account surpluses (as in China). But they are the result mainly of capital inflows, and these could flow out,” explains Manmohan Agarwal, a political economist with the Centre for International Governance Innovation, a Canada-based think-tank. In other words, India doesn’t have the financial resources that China has.

These, though, are not the only factors in this decision. “As Europe is our largest trading partner, we have a stake in the orderly functioning and prosperity of European markets,” Prime Minister Manmohan Singh has said, adding, “If [Europe] gets disturbed, it will [involve] some cost to our economy as well.”