Brown Hopes in the Ring

South Asian candidates are standing for US Senate and Congress elections in impressive numbers. The chances of most, however, are dulled by factors beyond their control 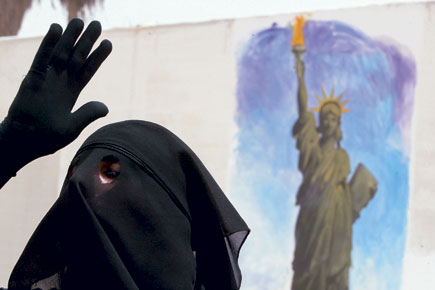 South Asian candidates are standing for US Senate and Congress elections in impressive numbers. The chances of most, however, are dulled by factors beyond their control


NEW YORK CITY — On 2 November this year, Tanzila Ahmed, a 31-year-old Bangladeshi-American, will be glued to a TV screen somewhere in California. She’ll be watching the results of an election that will decide, among other things, the fate of the US Senate and House of Representatives (or Congress). Ahmed, a blogger and political organiser, has a vested interest in US polls. She is managing the campaign of an Asian candidate in a local Oakland council election.

But Ahmed has another interest too: this year, six Americans of South Asian heritage are standing for election to the US Congress, a first in the country’s history. Like millions of other South Asians around America, she will be watching to see if any brown faces make it to the House. “It’s thrilling to see so many young South Asian Americans running for office,” she exults.

Within the South Asian community here, this year’s elections are being seen as something of a watershed in American politics. Unlike the stray South Asian candidate of years past, the November elections will witness the campaigns of no less than 17 South Asians (including those standing for state elections). High-profile candidates include South Carolina gubernatorial nominee Nikki Haley and California Attorney General contender Kamala Harris. Combined with the avalanche of South Asian faces on mainstream television (including the hosting of MTV Video Music Awards by comedian Aziz Ansari), 2010 has been a year of unprecedented visibility for America’s 2.5-million-strong population of South Asians.

For many, the rise of the desi politician parallels that of Barack Obama. The election of a Black with an unpronounceable name and a Muslim father to America’s highest office has encouraged other minorities to come forward as well. “I think that Obama demonstrated that even if you have a funny name, you can run,” said Reshma Saujani, a Democratic candidate from New York who lost her primary (and will therefore not be in the fray on 2 November), in USA Today.

Others say that it’s the natural progression of a community that has achieved financial and professional success but is yet to make its mark in the political arena. Only two Indian Americans have ever been elected to Congress: Dalip Singh Saund in 1957 and Bobby Jindal in 2004.

Most of this year’s South Asian candidates are standing on Democratic tickets. And most have chosen to be very forthcoming about their immigrant backgrounds. Take Manan Trivedi, a 36-year-old physician and Iraq War veteran standing from Pennsylvania. Trivedi openly talks about his parents’ experience as immigrants and doesn’t shy away from saying that he’s a practising Hindu.

Of the five Indian American Congressional contenders, all have kept their original names. Also, like Trivedi, most have been nonchalant about their non-mainstream religious affiliations. Many are Hindu, the exceptions being Ravi Sangisetty, who is Catholic, and Ami Bera, who makes no mention of his religion on his campaign website. Given that Bobby Jindal, the most successful Indian American politician to date, is a converted Roman Catholic who goes by an anglicised first name, this is a welcome change for Indian Americans.

The sudden emergence of non-White candidates is often touted as America’s coming-of-age as a plural and racially varied democracy. “This is the post-Civil Rights phase of American history,” says Dr Madhulika Khandelwal, director of the Asian/American Center at Queens College. “Minorities have secured their status as equals, and now they’re coming to the fore in large numbers,” she says.

In spite of the hype, however, the road to Congress for America’s Subcontinental political aspirants looks bumpy. According to The New York Times, all five Indian Americans running for Congress are likely to lose. There’s a sixth candidate who may be counted as South Asian, a Detroit native called Hansen Clarke, who will probably win. But Clarke, whose father was a Bangladeshi immigrant, has mainly been raised by his Black mother and is a practising Roman Catholic. In other words, he is not the classic South Asian American.

Yet another likely winner is Nikki Haley, who was called a ‘raghead’ (a racial epithet used to describe Arabs or other ethnicities that wear headgear) by a former Senator. A tall, good-looking Republican whose complexion is a shade lighter than brown, Haley is a Protestant, having converted after her marriage to Michael Haley. She has also conspicuously avoided using her pre-marital maiden name, Randhawa, and has traded in the more ethnic Nimrata for Nikki.

Remember, the 2 November elections are likely to take place in an atmosphere charged with religious and racial tensions. In May this year, controversy broke out over a proposal to build an Islamic cultural centre and mosque close to the site of the 9/11 attacks in New York. The ensuing protests have resulted in a wave of intense Islamophobia across the country, perhaps the worst since 2001. In August, a Pakistani taxi driver in New York was stabbed by a 21-year-old documentary filmmaker. Less than a month later, a Florida pastor threatened to burn a copy of The Quran. A CNN poll found that 68 per cent of Americans are opposed to the construction of the centre, while attacks on mosques across the US have increased exponentially.

Equally polarising has been the debate around immigration. Earlier this year, Arizona passed a law that made it illegal for a person to travel within the state without papers showing his status as a legal resident of the state. Despite widespread protests and fears of the law resulting in racial profiling, the state refused to stop passage of the legislation. The draconian law has since been blocked by a court, but several other states are now drafting similar versions of it.

Both factors are weighing heavily in the Indian American bid for Congress. Experts say that voters are unlikely to send someone with a different background and an unfamiliar religious affiliation to Congress in the face of a Republican campaign focused largely on Islam and immigration. “People tend to vote for candidates who look like themselves,” says Karthick Ramakrishnan, a political science professor at the University of California, Riverside.

J Ashwin Madia, who was the sole South Asian congressional candidate in the 2008 election, admits that the current anti-Muslim air in America may reduce the possibility of seeing a brown Congressman taking his oath on The Gita next year. “Ultimately, religion matters to some, and cynical politicians will always try to employ divisive tactics,” says Madia, an Iraq War veteran who lost despite running a highly credible campaign in a state that sent Obama to office with a healthy majority. Madia is no stranger to divisive, racially tinged rhetoric. His opponents repeatedly insinuated that because Madia wasn’t White and married, he was “not one of us” and “didn’t fit the demographic” of the constituency.

Anti-Islam xenophobia has had an effect on South Asian candidates already. Ami Bera, for instance, a Democratic nominee from Sacramento, California, ended up returning a $250 campaign contribution that came from an individual linked to the Council of American Islamic Relations after his opponent insinuated that he was accepting money from an organisation linked to terrorists. The individual donor himself had a clean record, but in an effort to steer clear of controversy, Bera ended up alienating a large section of Sacramento’s Muslims—potential voters of his.

In the months following Barack Obama’s victory in November 2008, commentators congratulated each other on the arrival of a ‘post-racial’ America. But much has changed since those early days of heady euphoria. Racism haunts American politics just as much, if not more. Since taking office, Obama has been lampooned as an African witch doctor and has been compared to Adolf Hitler. He’s been called “a Muslim President”, “a racist who hates White people” and even “an African colonial despot”. His wife Michelle has been caricatured as a gorilla.

“We have still not overcome treating our non-Christians and non-Jews as ‘the other’ and untrustworthy of the highest elected offices in the US,” says Dr David Leege, professor emeritus at the University of Notre Dame. As evidence, Dr Leege points to the fact that the perception of Obama as a covert Muslim whose “deepest thought processes were shaped by a Third World father” has only grown over the past two years.  Besides, says Ramakrishnan, research has shown that being a Black male cost Obama a significant number of votes in 2008. “Given the state of the economy and anti-Bush sentiment, he should’ve won by a far larger margin,” he says.

Still, a candidate’s electability is not decided by binaries of race and religion alone. America is clearly a complicated democracy, and one of the biggest factors that will affect the odds of seeing an Indian American Congressman in office next year is Obama’s performance as President. Having started his presidential term with a meteoric 69 per cent approval rating and skyhigh expectations, it’s no surprise that Obama’s popularity has fallen. But few were expecting it to plummet to its all-time low of 42 per cent this August. Crucified by a recession that refuses to go away, a stimulus plan that is being seen by many as wasteful government spending, escalating troop casualties in Afghanistan, and a controversial Healthcare Bill, the Democratic party is suffering from a plethora of public relations problems.

Commentators are predicting a Republican majority in both the Senate and Congress this November. “It’s a tough year even for a Democratic incumbent to try and hold on to his seat. But it’s practically impossible for a newcomer with little political experience who is from a different race,” says Ramakrishnan.

Others are more hopeful. Dr Bera believes that the American voter is capable of looking beyond issues of race and ethnicity. “Being Indian American in many ways is an asset. The values I was brought up with are values of family, of working for the next generation and for the community. They are the same values that are important to America,” he says.

Ultimately, though, America’s transformation into a truly post-racial society promises to be slow and long drawn out, as two different faces of a single country battle each other. America’s social and political differences often fall into neat geographic borders, and questions of who you worship matter far more in Mississippi than in Manhattan. The brown man with an elephant god may not win popular support this time round, but he probably will a few years from now. And when he does, he will surely be a symbol—of either a changing America or a deeply cleaved one.