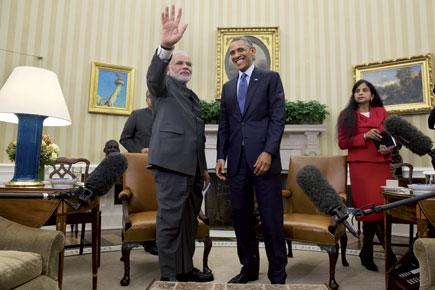 On November 21, Prime Minister Narendra Modi broke the news on Twitter: “This Republic Day, we hope to have a friend over… invited President Obama to be the 1st US president to grace the occasion as chief guest.” To say that the announcement was unexpected would be to underestimate the boldness that underpinned the move. By inviting the US President, Barack Obama, to next year’s Republic Day celebrations, Modi managed to stump his critics and defy the expectations of even his supporters like so many times before in his short six-month old stint so far as the nation’s Prime Minister.

The sheer audacity with which Modi seems to challenging the foreign policy shibboleths of the past is quite striking. On the surface, an invite for the US President is not really significant. After all, the US is now one of the closest partners of India. Be it the economy, defence, regional security, or geopolitics, there is today an extraordinary degree of convergence between the interests of the two states. Yet the diffidence of the Congress led-United Progressive Alliance government in acknowledging this openly was a reflection of the outmoded ideological trappings of the past. Even as former Prime Minister Manmohan Singh was gung-ho about a robust US-India relationship, his party made sure that in the last four years, ties with the US were not only put on the backburner but deliberate efforts were made to scuttle forward movement on issues which were clearly in India’s interest. The greatest harm was done by A.K. Antony in taking US-India defence ties in reverse gear over the past few years. This was all done in the name of upholding some warped idea of non-alignment.

In a matter of months, Modi has brought about a paradigm shift in the Indo-US relationship despite having being denied a visa by the US in the past. He was being advised by many to shun the US but he has boldly reshaped the contours of the relationship. In his very first month, his government scuttled the World Trade Organization’s Trade Facilitation Agreement (TFA) talks leading to much talk of India’s impending global isolation. Yet New Delhi held onto its negotiating position and ultimately ended up signing a pact with the US on the sidelines of the East Asia Summit in Nay Pyi Daw which indefinitely extends the so-called “peace clause” in the TFA. India’s food procurement and subsidy programme cannot now be challenged in any fora till a conclusive deal on the subject is concluded on the issue. Obama commended the “personal leadership” of Modi in finding a way forward to break the impasse. Here was a leader who was not merely obstructionist but was also eager to find ways to move forward.

It has been a clear diplomatic win for India but the Prime Minister decided to take US-India ties a notch higher by inviting Obama to the 2015 Republic Day celebrations – an invite that is usually viewed as a celebration of India’s close diplomatic partnerships. This will be the first time a US leader will be gracing India’s Republic Day celebrations as a chief guest. How ironical when one realizes that China and Pakistan have been part of these celebrations in the past but not the oldest democracy in the world. The Congress Party would never have been able to accomplish such a feat. The non-alignment ayatollahs in India must be scrambling at the diplomatic successes of the Prime Minister. For years, the nation has been told that the only way Indian foreign policy establishment can secure Indian interests is by working within the rubric of non-alignment. Just two years back, some of the best and the brightest in the Indian foreign policy establishment came up with a ‘new’ foreign policy strategy for India. And lo and behold, they titled it ‘Non-Alignment 2.0.’

And now we have a Prime Minister and a government that is not trapped in the ideological moorings of the past. The Modi government is re-shaping Indian foreign policy in some fundamental ways. A self-assured and sure footed Modi and his team have given up the defensiveness of the past. It is confidently engaging with all major powers to secure the best possible outcomes for India. Where in the name of non-alignment previous governments would not acknowledge its convergence with key partners, Modi and his government is explicit about affirming India’s key partnerships. The coyness of the past is giving way to a new refreshing openness which is embedded in the pragmatic instincts of the Prime Minister. So the US-India joint statement signed during the visit of Modi to Washington in September was explicit about the US-India convergence in maintaining stability in South China Sea. It didn’t matter if the Chinese got annoyed. And after 28 long years, India has reached out to Australia at the highest levels to underscore Australia’s importance as a strategic partner of priority. Israel’s keenness to have an open relationship with India is too being reciprocated warmly.

With India's immediate neighbours, there are certainly signs that there is a new dynamism in bilateral ties as New Delhi is putting renewed emphasis on revitalising its regional profile. India's neighbours, barring Pakistan, are certainly looking at India with a new sense of expectation. Delhi now has to operationalise those aspirations that have been articulated. Recognising that the implementation phase has always been a problem for Indian credibility, the Modi government is focusing on completing projects in its neighbourhood that are already in the pipeline rather than announcing new ones. Despite strong resistance in some quarters and the danger for the BJP of being termed opportunistic, Modi has declared that he plans to go ahead with the implementation of the Land Boundary Agreement signed between New Delhi and Dhaka in 2011 but not ratified by the Parliament which simplifies the tortuous Indo-Bangladesh border, exchanging more than 100 tiny enclaves left over in each other's territory from the 1947 partition.

On its engagement with Pakistan, the Modi government has decided to take a gamble by resetting the terms of engagement by being more hard-nosed and not backing down in face of Pakistan's escalatory tactics. It is a move that was probably long overdue but it is not clear what India's options are should this gamble fail. Given Pakistan's internal turmoil, this perhaps doesn't matter in the short-term but India needs a long-term policy that focuses on primarily managing the national security risks emanating from Pakistan. It would do great damage to Modi politically if his government is forced to talk to Pakistan once again as in the past under global pressure in case of another Indo-Pak crisis.

Afghanistan will be a critical challenge with the departure of western forces from next month. India will have to articulate its own role more cogently. It has immense goodwill in Afghanistan that it can leverage. But that would mean stepping up its security role. This will be critical as the Modi government has made immediate neighbourhood its priority and India’s reputation as a regional security provider will be under scanner. The Modi government seems keen to expand its security profile in Afghanistan and is working to provide Kabul with military jeeps, choppers and automated weapons in a bid to strengthen the army as a first step in that direction. It has also finally, after years of dilly-dallying under the previous government, taken a decision to invest $ 85.21 million in developing the strategically important Chabahar port in Iran, allowing India to circumvent Pakistan and open up a route to landlocked Afghanistan.

The biggest strategic challenge for India remains managing China’s rise. The Modi government has concluded that the right balance between enhancing economic and trade ties with Beijing while building a deterrent military might is the need of the hour. The Chinese President, Xi Jinping’s visit to India in September turned out to be a damp squib and China may have lost an opportunity to generate goodwill with the new government. The Modi government is trying to increase its scope for diplomatic manoeuvring vis-à-vis China by building substantive ties with states like Japan, Vietnam, Australia and the US.

Modi seems to be re-defining the terms on which India is likely to engage with the world in the coming years. Pragmatism coupled with a more confident assertion of Indian interests has been his government’s hallmark so far. He is not shy of reaching out directly to new constituencies such as the Non Resident Indians and business communities in other states. For India’s friends, a new outreach is in the offing. For India’s adversaries, new red-lines are being drawn.

Most significantly, Modi is giving every indication that he has no time for meaningless rhetoric of 'non-alignment.' He will work with anyone and everyone to secure Indian interests, the most important of which for him is to take India on the path of rapid economic growth.

Discarding old ideological baggage, Modi is busy engaging confidently with all major global powers without inhibitions. Foreign policies of nations do not alter radically with changes in governments. But with the backing of Indian electorate’s decisive mandate, Modi today has an opportunity to bring about a realignment of Indian foreign policy priorities and goals.