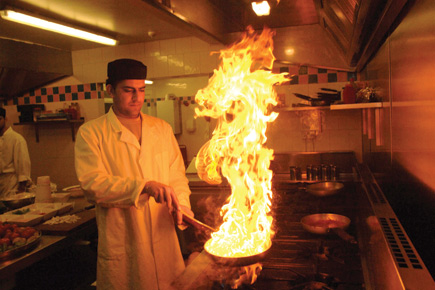 
If the British have their way, the Indian word ‘balti’ will soon belong to them! They are not interested in our Hindi word for the lowly bucket. For them, Balti is a special type of curry to which a city in the Midlands is laying claim.

The Birmingham City Council has decided that Balti curry was born in its town and has launched a legal battle to patent the name. If successful, then like the strategy used by French champagne, Melton Mowbray pork pies or English Stilton cheese, only Indian restaurants in Birmingham will be allowed to use the term Balti for their curries and serve the dish. “The idea to trademark Balti is interesting. We are always seeking new and imaginative ways to promote the city regionally, nationally and internationally. It will benefit local people and businesses and that is why we do not hesitate to pursue it,” says a Birmingham City Council spokesperson.

However, the idea has met with opposition by restaurateurs all over the UK. Suman Sinha, from the trade magazine Tandoori, says any attempt to prevent those outside the Midlands from using the name will upset many in the business. “Birmingham is rightly proud of its creation, but there will be strong resistance if they try to stop others from using the name,” he says.

Curry—a generic term for anything with gravy cooked with lots of spices—has become extremely popular with the British, so much so that the ubiquitous chicken tikka masala, an Anglicised version of butter chicken, has been voted Britain’s favourite dish. Curries arrived in England as far back as in the 17th century, when the East India Company first started trading in the East. Establishing a stronghold in the Gujarati port of Surat, ships returning to Britain brought back not only Indian spices, but Indian seamen, some of whom decided to start a new life in London. This small Indian community established places to eat that would remind them of home, and slowly locals, too, developed an interest in this foreign cuisine. By the late 18th century, curries began to appear on London menus and the first commercial curry powder was introduced.

Britain’s first Indian restaurant, Hindustani Coffee House, was opened in Portman Square, London, 200 years ago in 1809 by Sake Dean Mahomed, a Bihari from Patna who had married an Irishwoman. By the time Mahomed died in 1851, at the ripe old age of 101, the restaurant had closed and bankrupted him in the bargain. But in its early days, Hindustani Coffee House was distinctly upmarket, with even Prince Edward VIII frequently dining there. Besides, the night after the boats from India berthed at London’s docks, there was always an influx of maharajas.

The first recorded Indian restaurant of the 20th century was Salute-e-Hind in 1911, but the eatery to have any real influence was The Shafi,  opened by two north Indians, Mohammed Wayseem and Mohammed Rahim, in 1920. The Shafi was situated in Gerrad Street—now the centre of London’s Chinatown—and soon became a meeting place for Indian students. A few other Indian restaurants, like The Kohinoor and Curry Café, followed, but these were mainly for Asians. The first fashionable Indian restaurant, Veeraswamy, was opened by Edward Palmer in 1927 on London’s Regent Street. It still thrives and is owned by Ranjit Mathrani and Namita Panjabi.

But the real rise of Indian restaurants was in the second half of the 20th century and largely because of  the influx of Bangladeshis. Some 80 per cent of ‘Indian’ restaurants in the UK are owned by Bangladeshis, most of them from Sylhet in north-east Bangladesh. Sylhet was a prime source of seamen on British imperial ships and this set the scene for thousands of Bangladeshis to migrate to the UK, particularly during the War of Liberation in 1971. In the last 30 years, there has been tremendous growth of curry houses in the UK, their numbers having swollen to over 10,000. Almost every high street in the island nation can boast of at least one ‘Bengal Tiger’ or ‘Jewel in the Crown’. Having a curry in the local ‘Indian’ on a Friday or Saturday night has become as much of a British tradition as going for a few pints of beer to the pub. Indian food is big business, raking in a turnover of millions of pounds.

Traditionally, the food served in most of these restaurants has little in common with authentic Indian or, for that matter, Bangladeshi cuisine. The majority stick to the same formula for the basic sauce, which is added to a small selection of pre-cooked meat and vegetables to give numerous permutations of dishes. The main sauce is a thick red gravy, using the normal spices and artificial red colour. If the customer wants a korma, coconut cream and turmeric is added to this sauce and poured over the desired meat. If vindaloo is ordered, chilli powder and tomato puree is added—it’s yoghurt or curd for cooler dishes and more chillies for the hot ones.

Initially, in order to make their eateries different, some restaurants began to prefix ‘karahi’ to the name of some dishes, and serve them in small brass karahis to make it look authentic. The idea caught on, and soon, every curry house was offering ‘karahi gosht’ or ‘karahi chicken’. It is believed that in 1977, bored with the word ‘karahi’, restaurateur Mohammed Ajaib, a Pakistani immigrant in Birmingham, decided to change the name ‘karahi’ to ‘balti’. He wanted to create a dish with a USP that would help him draw customers to his eatery in the city’s competitive market. His heady mix of fresh spices, herbs and chillies, cooked in a flat-bottomed wok, became a hit and Balti was born. The idea spread like wildfire and soon every curry house in Birmingham’s Asian-dominated areas of Sparkbrook, Balsall Heath and Moseley areas began to offer Baltis on their menus. The area became known as The Balti Triangle. Some even changed the names of their restaurants to contain the word ‘balti’—Punjab Balti, Balti of the North, etcetera. Over the years, the word was adopted by restaurants across the UK, and now even pre-cooked curries sold in supermarkets often use it to entice customers.

Rais Miah, owner of Balti Bazaar in Lye in central England, says that if the Birmingham Council patents the term, it will hurt his business and that of all curry houses. “If the plan is approved, it will mean that most Indian and Bangladeshi restaurants in the UK will have to spend a lot of money to change their menus and signs. They might even have to close down since business will suffer, Balti dishes being the most popular choice of customers,” he says.

A representative of the Guild of Bangladeshi Restaurateurs, Staffordshire and Black Country Suburbs branch, Miah says he has been approached by other Black Country curry house owners worried about the plan. “With recession, businesses cannot afford extra expenditure. I think it is another tactic of the Birmingham City Council to squeeze more money out of already hard-working restaurateurs,” he adds  angrily.

Miah is not alone in his outrage. In London’s Brick Lane, now famously known as Little Bangladesh because of its large ethnic population, there is no appetite for Birmingham’s claim on the name. Azmal Hussain, owner of Preem and Prithi Restaurant, says it is impossible to trademark a way of cooking. He argues that each chef has his own way of making the Balti and nobody knows anything about the first Balti. “Tell me what is the original recipe? And I’ll tell you ‘Yes, you can have it’,” he says. “But nobody knows the recipe. My restaurant’s Balti is not similar to the one next door. It is a cuisine and everybody has a right to use the name,” he adds.

The Birmingham City Council’s task is by no means easy. Apart from opposition from restaurateurs across the country, the process for getting the trademark can take years, if not decades. In 1999, the Melton Mowbray Pork Pie Association, a group of seven manufacturers, applied to the EU to have their pies protected. They wanted the name Melton Mowbray to only be applied to pork pies made within a 1,800 square mile area around their town. But a large food corporation, which was using the name for its own pies, was against the move. Finally, after a nearly decade-long battle, the protection was granted in 2008. “It will be a long drawn-out process and it does take time. There is a protocol to follow and they would have to come up with a group involved with Baltis. They would also have to decide what criteria they would want a Balti to fulfil,” says Stephen Hallam, a spokesman for the pie association.

The Birmingham City Council battle for the Balti is certainly not currying favour with most. And one never knows, if they do get the trademark, by the time it does happens, Balti’s time may have ended in favour of another South Asian name.  Patili chicken, perhaps.