The Sudden Death of Restaurants: Table for None 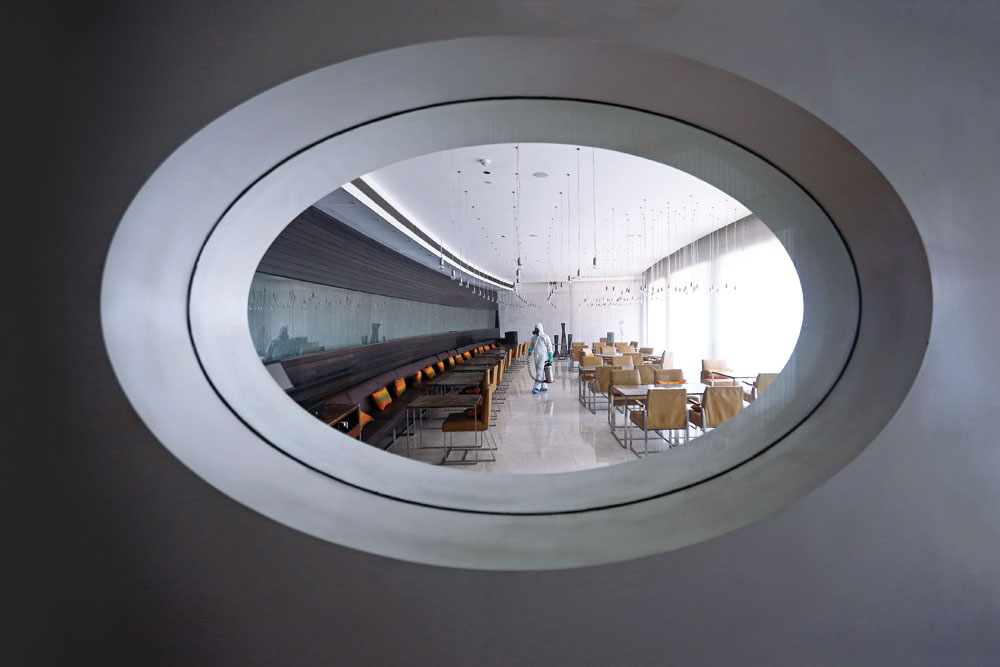 
In an alternative universe, Ritu Dalmia would have been chatting with guests at one of the nine restaurants she runs in Milan, Delhi and Goa, cooking something out of the menu for them while simultaneously planning the catering for a mammoth event in Sicily next month. Now, she’s sitting in the garden of her Goa cottage, enjoying the wind in her hair and eating cup noodles.

One of India’s most celebrated chef-restaurateurs is forcing herself not to think of the future. Mostly because it looks so bleak. It’s not that she hasn’t seen failure before. As a young woman, she started Mezza Luna in the Capital in the Hauz Khas of the 1990s, only to have it closed down because Mediterranean food was so ahead of its time. Later, she opened the well regarded Vama in London, only to move out of the partnership by the new millennium.

But the scope of this crisis is much larger. For one, her restaurant and catering empire has grown, evolving into Riga Foods, with a 51 per cent stake bought by industrialist Analjit Singh in 2016. It now employs 290 people globally. She has catered for all manner of high-profile events from the wedding of Anushka Sharma and Virat Kohli in Florence, Italy to the Google annual conference at the Sicilian Verdure Resort. She remains the good-natured young woman who went to Italy to buy granite for her family business but fell in love with its food. “The food industry is unique,” says Dalmia, “in that we don’t have a non-perishable product. Yet the fixed costs, of rent and salaries, are killing. And that’s 65 per cent of the costs.” When restaurants finally open—clearly, they’re not on top of anyone’s lockdown countdown—consumer spending power will decline. Rents should also be renegotiated, she points out, especially since social distancing will mean seating capacity will be down to 65 per cent. The industry employs over 15 million people (including those in allied industries) and yet governments consider it luxury. “I have paid salaries out of my own reserves for these three months. But I don’t know where the rest of the money will come from,” she says, her voice crackling with anxiety on the phone.


There is blood on every high street of every city. No one is being spared. Not the celebrated East Village bistro in Manhattan, Prune; not London’s Hawksmoor steak restaurants. There is anecdotal evidence to suggest that 70 per cent of Dubai’s restaurants will shut down. As much as 11 per cent of Italy’s restaurants have already closed. The lockdown may have seen a culinary renaissance as families were forced to cook at home, but eating out will take a long time to recover. For many more weeks perhaps, a tasting menu may well be the spoonfuls you put away to check the salt in your dish and an amuse-bouche may well be the leftover from yesterday’s main course.

“Changes will be at three levels. Chefs will concentrate on local and seasonal produce. There will be transparency of hygiene and cleanliness. There will have to be more vegetarian options on the menu,” says Manish Mehrotra, chef, Indian Accents

Vineet Bhatia, Michelin star chef, runs 11 fine-dining restaurants across the globe. The London-based chef who is in demand from Dubai to Riyadh, from Geneva to Mauritius says fine dining is the worst hit in the sector, because it is not built on a delivery model but on an ambience or escapism model. For now, he says, they’re trying to create this ‘restaurant dining’ experience within people’s homes, for special occasions. In Dubai, they’ve opened up for delivery and eat-in under the guidelines of the UAE Health Ministry but he’s working out how to recreate Indego by Vineet as an at-home restaurant dining style. At his restaurants, he’s had to curtail inventories and make hygiene visibly a key factor.

Hotels are suffering because of the lockdown too. According to hospitality management consultancy, Hotelivate, the losses for hotels are pegged at three levels: best-case scenario (if life returns to normal by June)—$4.69 billion; mid-case scenario (if business revives by September 2020)—$10.82 billion; and worst-case scenario (if the revival takes place later than this calendar year)—$14.76 billion. Hoteliers of the level of general managers and executive committee members have had to accept pay cuts of 20-50 per cent for this financial year. Hotelivate expects these cuts to remain in place through the year.

“We’ve seen bad times before and we’ve supported our staff through many crises, but nothing on this scale,” says AD Singh founder, Olive Group

This is the time to revisit costs of rent, staff, utilities and of acquiring produce, especially international. Hotels will examine the economics of running six restaurants at a time or of the luxury amenities on offer. The banquet hall business is on hold, as is the conference model.

But even when a hotel is shut, it never quite is. As Priya Paul, chairperson of the Apeejay Surrendra Park Hotels, says of her 22 hotels, 10 are in various stages of operation for doctors, caregivers, consultants. “The rooms have to be serviced, in-house guests have to eat and there has to be security,” she says. When hotels are fully functional, they will have to hit the ground running with new protocols in place for hygiene, safety and food. But there will be hard times ahead and there will be downsizing. “This is a good time to reset and restructure, to make the hotels sustainable for business, for the country and for an interconnected world. We have to be innovative, creative and deliver value for price.”

Hotels big and small are adapting. Hyatt has already announced plans to introduce an accreditation through a performance-based cleaning, disinfection and infectious disease prevention programme that will focus on establishing hotel environments that are sanitary, safe and healthy. As part of Hyatt’s Global Care and Cleanliness Commitment, by September 2020, every Hyatt hotel will have at least one person on property trained as hygiene manager, who will be responsible for their hotel adhering to new operational guidance and protocols. The Oberoi Group of Hotels has announced similar detailed guidelines.

“The food industry is unique in that we don’t have a non-perishable product. Yet the fixed costs, of rent and salaries, are killing. And that’s 65 per cent of the costs,” says Ritu Dalmia cofounder, Riga Foods

Small will be bigger, says founder and CEO of The Postcard Hotel, Kapil Chopra. Domestic highend leisure will pick up quickly, he says, in the absence of international summer travel. Families will be going to driveable resorts and boutique hotels, booking them entirely if possible. He owns three hotels in Goa, which have 11, eight and six suites each, respectively. Families who are friends will book entire hotels to prevent any possibility of contagion. To put in a second layer of security, the hotels will restrict dining to guests only. He hopes his hotels in Thimpu, Bhutan and Galle, Sri Lanka, both marginally affected by the coronavirus so far, will also be allowed to open soon. He believes the same philosophy will see smaller highend hotels in Agra, Jaipur, Shimla and Mussoorie do well. Big-city hotels that depend on international business travel will be badly hit, given that most international travel will be down by 90 per cent till December. But the first to recover will be the city budget hotels as the consumer goods sector picks up.

Restaurants are already looking for new ways to reinvent, with new delivery models and DIY kitchens. The reality is, says Dalmia, that it won’t be enough to cover losses given that delivery service aggregators take 25 per cent of the charges because of the valuation model they work with. Even the usually sunny AD Singh, founder and Managing Director, Olive Group of Restaurants, one of India’s most recognisable highend chains, says the industry is bracing itself for the worst of times. Their plea to the Government to pay staff salaries through the Employees’ State Insurance Corporation where possible has met with no response.

“Small will be bigger. Domestic highend leisure will pick up quickly in the absence of international summer travel,” says Kapil Chopra, founder, The Postcard Hotel

So has their request that force majeure be made operational in case of rents with landlords foregoing their monthly instalments for the duration of lockdown. “We’ve seen bad times before and we’ve supported our staff through many crises, but nothing on this scale,” he adds.

Not just that. The restaurant business also needs support from government when it reopens. They need working capital for which they need the Government to nudge the Reserve Bank of India to allow low interest rates, with a moratorium on repayment. They need policy support with restoration of input tax credit on the Goods and Services Tax which has raised their operating expenses. And they need a change in the business environment to create a level playing field for aggregator delivery services as well as independent delivery services. Every relationship needs to be redefined and realigned, says Anurag Katriar, President of National Restaurant Association of India and Managing Director of Degustibus Hospitality, whether it is customers, clients, government or tax authorities.

“This is a good time to reset and restructure, to make the hotels sustainable for business, for the country and for an interconnected world,” says Priya Paul chairperson, Apeejay Surrendra Park Hotels

That’s the business. Even the way the kitchen is run will have to be transformed. Manish Mehrotra, Corporate Chef, Indian Accent Restaurants, who has spent much of the lockdown with his leg in a plaster, has had a lot of time to think about what the changes will be. He believes they will be at three levels. Chefs will concentrate on local and seasonal produce: with current regulations, the supply chains have been disrupted. It may not be possible to get a lot of ingredients, especially imported ones. The menus will have to change based on what is available. There will be transparency of hygiene and cleanliness: restaurants have to be extremely mindful of the cleanliness and no compromise can be made on hygiene. Dining areas, kitchens, storage areas along with other areas will have to be sanitised. And yes, there will have to be more vegetarian options on the menu: people are undergoing a drastic lifestyle change which will definitely impact food preferences. And this holds good for Indian Accent restaurants across New York, London and Delhi.

People will certainly become more mindful of their expenditures, especially at weddings. Dalmia had 14 events planned for catering over March, April and May. All were cancelled. Yet personally, this has been a great time for her. She has had to tap every ounce of her ingenuity to make meals for herself with little available. She will have to show the same intellectual and emotional agility to weather the storm that is brewing.

“Fine dining is the worst hit in the sector, because it is not built on a delivery model but on an ambience or escapism model,” says Vineet Bhatia, Michelin star chef