The most effective way to manage Covid-19 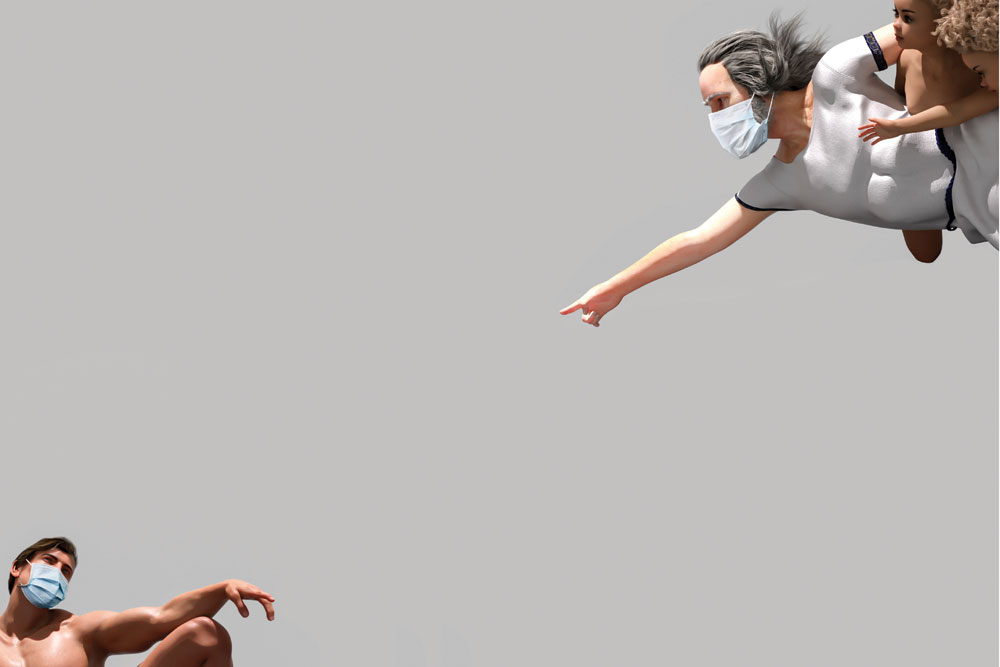 
IN A LANE in Andheri, a couple leap out from two sides of a cab. The driver has just informed them that the last passengers appeared ill. They leave the cab and the protesting driver, jump into another vehicle that appears cleaner, and make their way a couple of kilometres away, to a house party underway.

Ideally, there should be no large gatherings. But this isn’t the reckless partying of youths that has come in for criticism as the current pandemic spreads. Rather, it is a party shaped around the pandemic. The number of people gathered is kept below the recommended eight (although even this will be considered high later as the number of Covid-19 cases increase), everyone is given a bottle of liquid soap to wash before being allowed to present themselves, handshakes and hugs are foregone for distant hand-waves, and the rest of the night is spent, each one with a table napkin, to wipe themselves or, worse, cough into, conducting conversations at a measured distance from one another.

Each one has a coronavirus story to tell. One of them was evacuated earlier in the day along with the rest of her office colleagues because someone in another floor of the building had fainted for an unexplained reason. Another is continuing her yoga lessons with her tutor over Skype. Someone’s friend is calling off her wedding. And a relative of one of them has stocked up on essentials that can last her a few months and locked herself along with her husband, their two children and their three live-in maids in their house to ride out the infection.

Outside, the night sky is dark. It is a Saturday night, but you can see how empty the streets are. The pubs, nightclubs and other such establishments that overflow with people at these hours in this neighbourhood on other Saturdays, are now near empty. In any case, in just a few days, the state government will make some more rules that will have even these empty establishments join a list of others that now cannot be officially opened.

As the novel coronavirus spreads, it has now come down to this, that most basic and disruptive of health measures: social distancing.

India is at the juncture today where some countries were a few weeks ago. We have so far (at the time of going to print) about 147 confirmed positive cases, including three deaths. If we are to prevent a catastrophic explosion of cases in the next few weeks, like those witnessed in some other parts of the world, we are told we have to break the chains of transmission by preventing the infected from coming in contact with the healthy.

According to the Indian Council of Medical Research (ICMR), India is still in the second stage of the pandemic. Here, transmission occurs locally between people who got infected in their travels to the affected countries and the local people they come in contact with. ICMR’s director-general Balram Bhargava claimed at a press conference that the Government had conducted studies on 500 random samples and found all of them still negative, indicating that no community outbreak has yet occurred. In the next stage, transmission occurs within the community, and by the fourth, a full-blown epidemic takes place without an end in sight.


Immunity, we are learning now, is a shared space. We are each other’s immunity

So while borders are sealed and the infected quarantined, the aim now is not necessarily just about stopping the virus. It is also about slowing it down. By socially distancing ourselves from one another, by keeping a six-feet distance that proves too high for a jump for the virus from one host to another, and not by constantly touching potentially infected surfaces, we are to ‘flatten the curve’. This won’t necessarily stop the virus. The same number will probably fall sick eventually. But it could lead to a more manageable surge of patients that does not overwhelm the healthcare system.

Immunity, we are learning now, is a shared space. We are each other’s immunity. A young healthy person may fall ill and recover. But he can pass it on and kill another.

All of us, vulnerable or strong, are now to conduct our lives at a distance. We are to stop mixing, to go away from our places of work and community, and disappear into our homes. Everything is closed or off limits. The places we go to keep our minds occupied, our malls and movie theatres, to even the places we turn to for succour such as temples and churches, from schools and sporting arenas to gyms and restaurants, are closed or empty. Life has come to a grinding halt.

All this has led to remarkable visuals across India. One-seat distances are being maintained between people even on Mumbai’s crowded local trains (the Chief Minister has threatened to shut down the train network if the numbers don’t further come down). Most temples are shut, and the few still open pour generous dollops of hand sanitiser-like prasad into waiting devotees’ hands at their entrances. Housing societies are barring anyone except residents and maids with IDs inside their premises; deliverymen and others are being turned away. Workers now hunch over hand-railings and lift buttons with alcohol-based wipes sterilising these ‘high-touch’ surfaces; long-distance trains are removing blankets from their compartments; the few masked and kerchiefed faces on the roads, their hands constantly working bottles of sanitiser; the pharmacies emptied of surgical masks and hand santisers; the stockpiling of food and essentials as though an apocalypse were underway; the cancellation of movie and TV shoots; the one cricket match that was aired, before most sporting events were cancelled across India and the world, taking place between New Zealand and Australia in an empty stadium where players celebrated the fall of wickets by awkwardly bumping their elbows and having to fetch the balls they hit into the stands.

This is all part of a changed landscape where ordinary objects like blankets and common courtesies like handshakes have the power to kill.

A LOT OF THIS might sound like paranoia. And it probably is. But these attempts, in a way so humble like that other much-advised protection, washing one’s hands, when done properly, can be a very effective public health tool. We can see this in the way how two US cities responded very differently to the 1918 Spanish Flu pandemic. When the first case in Philadelphia was reported on September 17th, the immediate response of the authorities was to dismiss it. They downplayed the disease’s significance, schools were kept open, mass gatherings allowed, notably a city-wide parade on September 28th, and life carried on as usual. This went on right up to October 3rd. By then the disease had spread and begun to overwhelm public health resources. In contrast, when the first cases of disease among civilians were reported in St Louis on October 5th, the authorities were much more aggressive. They introduced a broad series of measures designed to promote what we now call social distancing within two days. ‘The difference in response times between the two cities… represents approximately three to five doubling times for an influenza epidemic,’ notes a 2007 study in the Proceedings of the National Academy of Sciences that compared their responses to the pandemic. ‘The costs of this delay appear to have been significant; by the time Philadelphia responded, it faced an epidemic considerably larger than the epidemic St Louis faced.’

While the vulnerable are the elderly and the infirm, it is the millennials who tend to go out and mingle

There is another more recent, yet to be peer-reviewed study concerning this current pandemic, published by Harvard University’s DASH research repository, which also provides a glimpse of just how effective social distancing can be. This one compares the response to the coronavirus infection between the two Chinese cities of Wuhan and Guangzhou. In Wuhan, where the virus was first detected sometime in early December, 2019, authorities waited for around six weeks before forcibly quarantining the entire city. Wuhan is considered to be the site where the pandemic first originated, and then there could have been no way to gauge just how quickly the virus would spread. But by the time the first infection showed up at Guangzhou, sometime in January, authorities were more proactive. Within a week of the first case being reported, schools were shut down, large gatherings banned and strict disease control measures were introduced. So while nearly 20,000 needed hospitalisation simultaneously in Wuhan, including nearly 10,000 deemed serious and over 2,000 in need of critical care, each day during the local peak of the epidemic in February, the reports in Guangzhou were radically different. ‘In Guangzhou, Covid-19 accounted for a total of 318 ICU-days and 724 inpatient-days between January 24 and February 29, an average of 9 ICU patients and 20 inpatients during that 37-day period,’ the study notes. ‘During the peak of the epidemic [early February], 15 patients were in critical condition, while 38 were hospitalised and classified as serious.’ The mortality rate at Guangzhou is also much lower, about 0.8 per cent compared to Wuhan’s 4.5 per cent.

There are still some—primarily the young—who can be reckless. In truth, their behaviour does not appear reckless at all. The mortality rate from this ailment is still between 2 to 3 per cent, most of the dead usually being the old and those with compromised immune systems. So while it is true that there is a much higher chance for such an individual from dying in a motor accident than succumbing to this infection, as the Lebanese-American author Nassim Nicholas Taleb claims, ‘The risk of car accident may be greater for an individual, but [it is] smaller for society… Under such conditions it becomes selfish, even psychopathic, to act according to what is called ‘rational’ behaviour… Assume a risk of a multiplicative viral epidemic, still in its early stages,’ he writes in a note about the ethics of precaution shared online. ‘The risk for an individual to catch the virus is very low, lower than other ailments. It is therefore ‘irrational’ to panic [react immediately and as a priority]. But if she or he does not panic and act in an ultra-conservative manner, they will contribute to the spread of the virus and it will become a severe source of systemic harm. Hence one must ‘panic’ individually [ie, produce what seems to an exaggerated response] in order to avoid systemic problems, even where the immediate individual payoff does not appear to warrant it.’

Social distancing is thus a responsibility. While the vulnerable are the elderly and the infirm, it is the millennials who tend to go out and mingle and for whom much of this infection will be harmless, who are the core group that can stop the flow of this pandemic. Unless they socially distance themselves, this idea will not work.

The most valuable resource in a pandemic is always time. When we distance ourselves, we are buying time, one handwash, one socially sequestered moment at a time.