“When you are venturing into an emerging market, it is important to dedicate time to creating awareness” 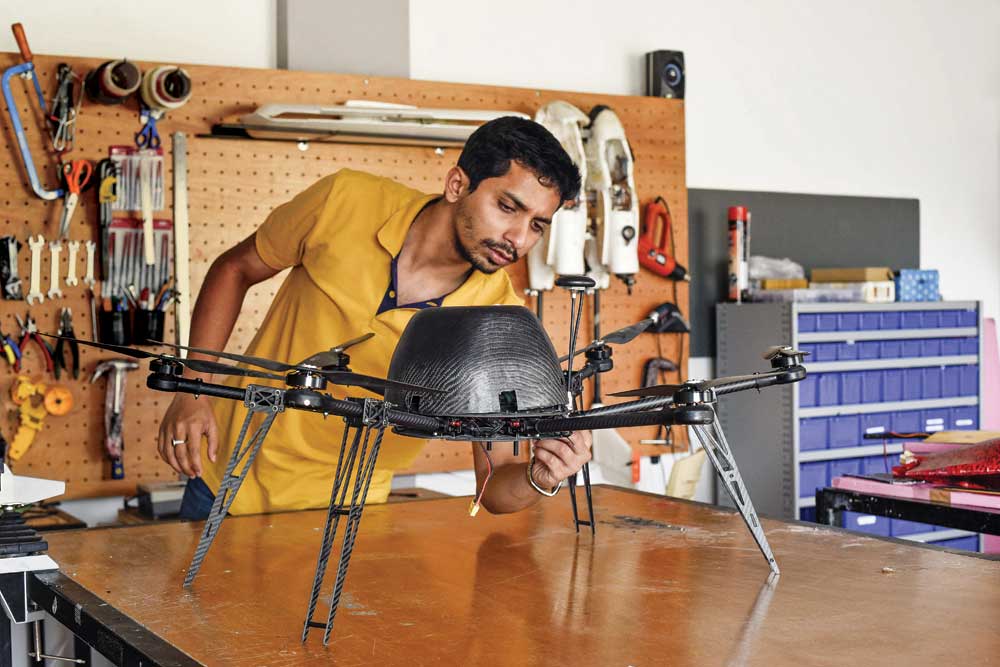 FROM A NONDESCRIPT garage-like office on the northern fringes of Bangalore, a team of young engineers is launching its dreams into the sky, one metal bird at a time. Among the few drone companies in India that design, build and fly commercial drones to survey large swathes of land and analyse the data captured, Aarav Unmanned Systems was an idea hatched at IIT-Kanpur over three years ago. The institute has a dedicated airstrip where students can test—and crash—their drones and Aarav’s founders did just that. Nikhil Upadhye, Suhas Banshiwala and Vipul Singh—Yeshwanth Reddy, with an MTech in Aerospace Engineering from IIT-Bombay, would join them later—shared a relish for aero-modelling and robotics and represented their alma mater in an international aero design competition organised by NASA, where they had to design an Unmanned Aerial Vehicle (UAV) that would weigh the least but lift a significant payload. They did not win, but the trip to America and exposure to the growing trend of recreational drones made the boys from India curious about the market potential at home. “We realised utilisation of UAVs for engineering applications is the future of this technology. So we started working on building technology for 3D mapping and GIS (geographic information system) surveying,” says Vipul Singh, talking to me in the only cabin in the otherwise open plan office. He directs systems engineering, sales and marketing, and business development.

Aarav’s four founders believe—for what is a startup without some youthful hubris—they can change the way India is mapped, surveyed and surveilled, but most of all, they love building cool machines. Their office is a tinkerer’s dream, cluttered with motors and rotors, cameras and engineering parts I cannot hope to identify, massive technical scribbles, a pingpong table, and a central workstation where hundreds of thousands of lines of code are written to make the drones more intelligent. Intelligence—of man and machine—is everything. What if a drone dropped dead on a precious archaeological site in Delhi that Aarav is soon to survey? What if one got tangled in the very power grid it is supposed to watch over? It was important to get everything right. From the start, Aarav’s focus was the tech—the hardware and the software—that goes into building a UAV, from the precision flight controller to the 3D mapping integration. They designed two versions, one with a fixed wing and another with multiple rotors, and got them made by vendors locally, importing only a few parts such as brushless DC motors and some sensors that aren’t manufactured in India. Aarav’s fixed-wing UAV can cover 100 hectares in 50 minutes and the multi-rotor, which can hover and is better suited for low altitudes, can cover 30 hectares in 40 minutes. This means that even a major survey, road laying for instance, can be a quick affair. Besides a camera and gyroscopes and accelerometers used to monitor the position and the orientation of the aircraft, drones can be equipped with the requisite sensors for each use case: Lidar for high-resolution mapping, a multispectral sensor for mining and agriculture, a thermographic sensor for detecting failures in a solar grid. The UAVs are autonomous and don’t need any expertise to fly, as is increasingly evident from their use in recreational photography and aerial cinematography.

IF CIVILISATION BEGAN with man scoping out faraway landscapes to settle, the drone is but an extension of this spirit of enterprise, an electronic pet with spindly legs, a keen eye and a range of skills to explore and monitor an area of importance. The possibility of every household owning a drone is a big leap for modern civilisation and it was made possible not by the West, but by a company in China. The world’s largest drone manufacturer is DJI, a startup from Shenzhen that has inspired dozens of others to build their own copters. DJI was founded by an engineering student in 2007 and it started out making flight controllers, making some money along the way. Once the casual market for drones started to expand, DJI made a big play for it in 2012 by launching two affordable semi-professional UAVs. The company today has the largest chunk of the drone market, an industry that, according to PriceWaterhouseCooper, will be worth $120 billion globally by 2020. Even as Amazon and Google are building their own aerial tech, DJI continues to have the cost advantage by employing Chinese engineers and selling its products predominantly in the Western world. If China can produce—and not just manufacture— great hardware technology, so can India, argues Vipul Singh. “We were clear that we wanted to own the technology. There are many companies importing drones into India, and they cost Rs 24-25 lakh, but we set out to slash this cost by half and build UAVs for Indian conditions,” Singh says. Aarav is ready for a beta launch of a limited number of its indigenous drones next month. Full-scale production will begin next year. There are few players in this space and one of them is Ideaforge, which worked with the DRDO to develop UAVs for defence and policing. It is pivoting at present to the commercial UAV market.

If it takes a month to get permission, the client would rather deploy a terrestrial force to survey his land

Drones for businesses—that is where the action will be in the coming years, says Singh, talking about applications in agri-tech, environmental checks and even monitoring the health of telecom towers. “When you are venturing into an emerging market with an emerging technology, it is important to participate in building a favourable ecosystem and dedicating time to creating knowledge and awareness,”he says, philosophically. Aarav started out trying to make and sell UAVs, but it was taking longer than expected. Meanwhile, there was little awareness about using drones in industries, agriculture and town planning. Aarav decided to lead the way with services, raking in some revenue in the process and raising an undisclosed amount in funding early this year from StartupXseed Ventures, 3ONE4 Capital, The Phoenix Fund and some HNIs. It has made over Rs 1 crore through services and expects to cash in another Rs 1.5 crore this financial year.

“They are basically an R&D company with a formidable tech core. I have high hopes for them,” says Bharat Lohani, professor at IIT-Kanpur and a leading Lidar researcher who mentored Aarav. “When we import drones, after-sale service is a big worry. Drones are highly technical and local support is a game changer,” he says.

Aarav’s clients include, among others, Coal India, the Telangana Government, and a consortium of universities that worked on urban planning and crowd control ahead of the Kumbh mela in Ujjain. This February, Singh and his team set out to map a 6-sq-km area of the city to ascertain the width and the capacity of the roads, the Shipra river ghats and the parking lots, much to the fascination of local boys who wouldn’t stop chasing after the drones. The flight over Ujjain was uneventful, but another time in a remote tribal village in Madhya Pradesh, things went terribly awry. “We were to survey the area for a dam and we had made markings on the ground for launch and landing when some tribals asked what we were up to. When we explained, more people came loaded in two tractors and wielding lathis. There was no cellphone network for miles, and we didn’t have walkie-talkies. We just packed up and ran,” says Singh.

At a time when talent in autonomous navigation, computer vision and robotics is the most wanted globally, the 16 young engineers at Aarav are building their own flying machines to tackle very Indian problems. They have many limitations, to be sure: unlike DJI’s drones, they do not have advanced computer vision capable of avoiding obstacles; and they cannot relay data in real- time to the ground station. But not all challenges surrounding drones are technological. In fact, cultural mores, governmental indecision on policy and the cost of the technology could decide if India will embrace drones, and when. Even as the West grapples with the moral calculus of amateur drones peeking into everyone’s private lives, India is yet undecided on how to take the policy on commercially licensed drones forward. As of today, it is not legal to fly a drone in India, but amateurs, businesses and police alike seem to follow a don’t-ask-don’t tell norm. The office of the Director General of Civil Aviation’s draft policy on civil drones lays down several excessively strict rules for owning, registering and flying UAVs in India, such as undergoing pilot training. The UAV fraternity is hoping the final guidelines, when they see the light of day, will be less stringent. If there continues to be ambiguity in policy, says Singh, Aarav will relocate to Singapore rather than have its drones flail in the sticky net of regulations. “We are targeting the global market anyway. There are three concerns any government could have with drones: safety, security and privacy. The third is not a big issue in India yet, and the first two can be addressed by issuing permits to commercial operators without delays. If it takes me a month to get permission to fly, the customer would rather deploy a terrestrial force to survey his land,” says Vipul Singh. A second round of funding should send Aarav’s twin ambitions of large-scale UAV manufacturing and end-to-end drone solutions aloft. Whether the winds of fate will carry them away from Indian skies is anyone’s guess.