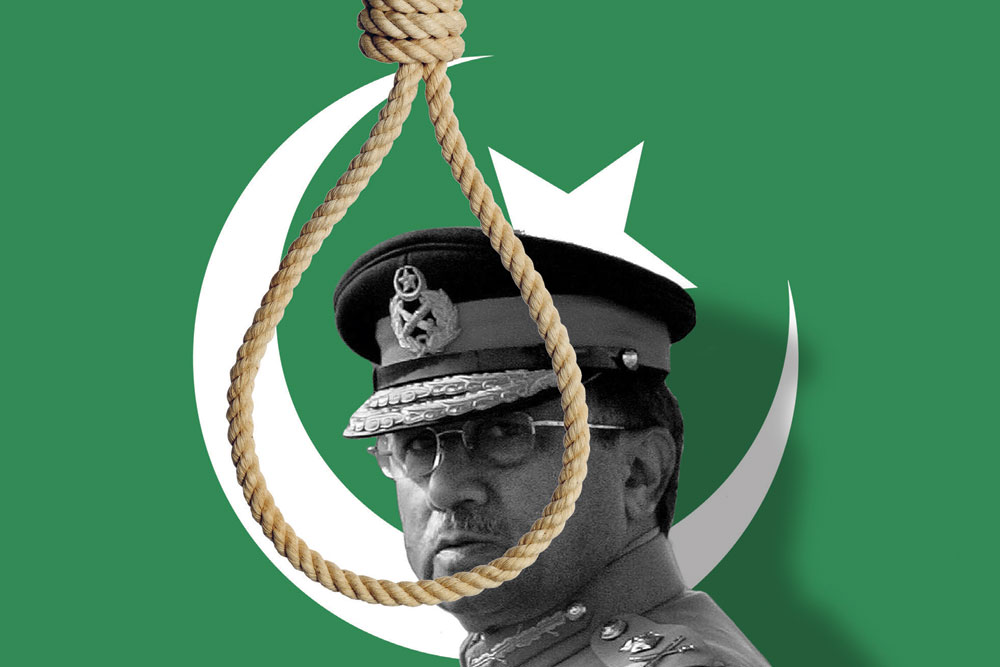 
THE END OF Pervez Musharraf came 11 years after he had exited the stage of Pakistani politics. His conviction on December 17th for treason and the death sentence pronounced by a special court is a first in the history of the country. In real terms, the conviction will not do much to the former dictator as he fled the country in 2016 and is now in Dubai.

The judgment is significant for many reasons. The case against Musharraf dates back to actions he took in 2007 when he issued a new proclamation of emergency after widespread protests against him. At that time, he issued a Provisional Constitutional Order which unlawfully empowered him. This was followed by the Constitution (Second Amendment) Order and finally the Oath of Office (Judges) Order. Using these three illegal orders, he amended the Pakistani constitution; suspended fundamental rights; dismissed judges of the high courts and the Supreme Court, packing these judicial fora with his nominees. When these steps were taken, Musharraf was donning three hats: army chief, president and chief executive of Pakistan.

If one looks at the history of military takeovers, these steps were par for the course. The orders issued by Zia-ul-Haq from 1978 to 1985 were far more pernicious to Pakistan’s political culture. But an unbridgeable political gulf divided 1985 and 2007. In 1985, when the Eighth Amendment to the Constitution was passed giving ‘reserve powers’ to the president—effectively allowing him to maul parliament and pretty much what he saw—there was barely a murmur of protest. In 2007, when Musharraf passed his three orders, he was already in the midst of an unprecedented rebellion by his countrymen. The 1985 order was the price demanded by a dictator to cede minor ground; in 2007, the dictator was trying to save his skin. It did not work. In October 2007, he hung his boots as army chief and just over a year later, left Pakistan.

Pakistan has few parallels for a country of its size continuing to experience repeated rounds of military dictatorship well into the 21st century. After the end of the Cold War, military takeovers not only became rare but were also frowned upon globally. But a unique constellation of political factors kept Pakistan immune from these changes. These factors had set in almost at the start of the country’s existence in 1947. The country is a neat laboratory experiment for what can go wrong. In its culture it was almost identical to the other successor state of British India in 1947. Yet, India and Pakistan rapidly diverged in their political cultures: the eastern nation turned into a developmental state; the western one into a garrison state where the army not only guarded the physical borders of the state but its ‘ideological frontier’ as well. India has never known a state religion; Pakistan has Islam as state religion. The religious demarcation provided the ideological foil for non-democratic forms of rule.

The political core that militated against democracy was an amalgam of two linked factors. One: the disequilibrium between the unelected and elected institutions of the Pakistani state, with the unelected ones calling the shots. Two: the dominance of a single state—Punjab—in almost all aspects of political and economic life of the new country. In one form or another, these factors have persisted to the present day. At one time, the army was all powerful. Now, once in a while, the judiciary gets its way in what it seeks. Political parties and parliament continue to remain weak. The dominance of Punjab adds to this imbalance. The latter was in no small measure responsible for the dismemberment of the country in 1971 when East Pakistan seceded. The racial stereotypes that were so offensive to Bengalis were of Punjabi origin. The army is the lynchpin by which these two factors play out.


The final act is the denouement. Either domestic politicians take over, as in the cases of Ayub Khan in 1969, after Zia-ul-Haq’s death in 1988, and Pervez Musharraf in 2008, or, as with Yahya Khan in 1971, external events make democracy viable again.This script has remained more or less intact since the first coup in 1958

If these factors make it easy to launch military dictatorships, the end result is always their defeat. Historically, the story unfolds in three acts. First a dictator takes over citing ‘pressing national interests’. Often, the courts give their stamp of approval citing the ‘doctrine of necessity’. Then begins the second phase when the dictator acquires a taste for political ambition, something that is usually the pretext to unhinge democratic rule in the first place. This is the most complex part of the story where the institutional factors, personal ambitions of the dictator and the wider political climate mix in an unpredictable way. The military ruler tries to further his interests by creating a ‘political party’ that backs his ‘ideology’ and tries his hand at elections, rigged or manipulated according to a pre-determined strategy. Pakistanis call such formations the ‘King’s Party’ in good British analogy. This ploy is usually a failure. By the time the King’s Party gets its act together, disenchantment with the dictator has already set in and Pakistan’s political parties, even through all their weaknesses, are able to strike back. The final act is the denouement. Either domestic politicians take over, as in the cases of Ayub Khan in 1969, after Zia-ul-Haq’s death in 1988, and Pervez Musharraf in 2008, or, as with Yahya Khan in 1971, external events make democracy viable again.

This script has remained more or less intact since the first coup in 1958. What has changed is the form. Dictatorial designations such as Chief Martial Law Administrator and Chief Executive of Pakistan are not fashionable any more. What matters is that the substance of military control be kept intact. In this, the army has succeeded very well. For a decade now, Pakistan has had a string of presidents and prime ministers all duly elected and mostly exiting at the ordained time. In the background, however, the army continues as before in a ‘hybrid regime’ where it has carved out exclusive spheres of government control. Relations with India, Afghanistan and the control of nuclear weapons are beyond the pale of elected leaders. Former Prime Minister Nawaz Sharif paid the price when he took his elected role too seriously. Pakistan’s Praetorian Guard would have none of it.

A day after Musharraf’s conviction, the army issued a statement saying that “the decision…has been received with lot of pain and anguish by rank and file of Pakistan Armed Forces.” It added that “An ex-Army Chief, Chairman of Joint Chief of Staff Committee and President of Pakistan, who has served the country for over 40 years, fought wars for the defence of the country can surely never be a traitor.” The statement ended ominously by saying that, “Armed Forces of Pakistan expect that justice will be dispensed in line with the Constitution of Islamic Republic of Pakistan.”

One can read the statement in many ways. It could be construed as a bland rebuttal born of corporate loyalty. It can also be read as a gentle warning that when it comes to its interests, the army will not tolerate the crossing of any red lines it has etched in Pakistan’s polity. So far, the current prime minister, a product of the army’s munificence, has not taken any step that would endanger his life in office. The statement about Musharraf is a reminder that he should not even try that.