The Congress president has written a great revival story 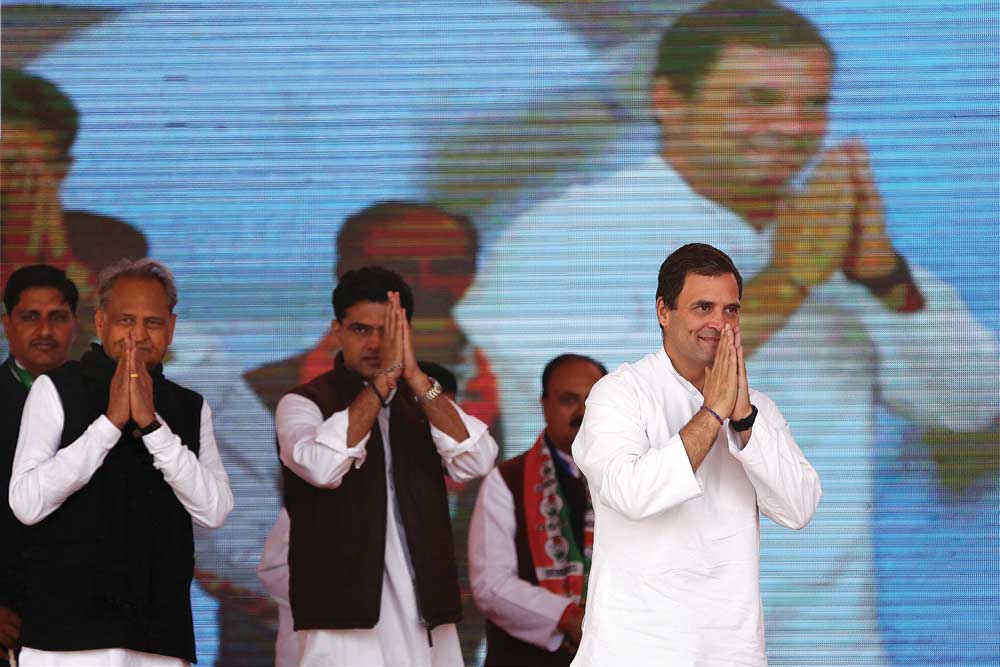 The man of the moment, no doubt, is Congress President Rahul Gandhi. He had rolled up his sleeves, determined to leave an impact on the electoral outcome of state elections as a signal of his party’s revival. Of the three ‘Hindi heartland’ states, the Congress was pitted more or less directly against the BJP led by Prime Minister Narendra Modi, and it was important for Gandhi to demonstrate an ability to take on India’s ruling party in these. Along the way, the 48-year-old Congress chief had to adapt to new political realities by bestowing more power to regional faces of his party, playing a ‘soft Hindutva’ card to challenge the BJP at its own game, and campaigning tirelessly to resurrect the political fortunes of the 133-year-old party that was seen on a steady decline since 2014. Gandhi also tapped anti-incumbency sentiments in these states and what he described as the flawed economic policies of the Centre, alleged to have burdened the poor. All it has paid off at the hustings.

At the time of writing, the Congress has won Rajasthan and Chhattisgarh, and is the main contender for power in Madhya Pradesh. Going into the polls, all three had BJP governments.

The Congress performance gives Gandhi a reason to celebrate as much as worry. With victories just six months ahead of the 2019 General Election, the results mark a turning point in the political journey of a leader who has been a consistent target of BJP taunts. Gandhi’s leadership is likely to face less criticism now. Yet, while the party counts its successes, it needs to tread carefully.

Take Madhya Pradesh. This is a state where BJP’s Shivraj Singh Chouhan was fighting for a fourth term as Chief Minister after 15 years in power and was thus faced with much anti-incumbency. It was still a photo finish. Had the Congress managed to forge a pre-poll alliance with the BSP, Chouhan would have been in significant trouble.

In Vasundhara Raje-ruled Rajasthan, where the Congress was hoping to sweep the state with a two-thirds victory, the BJP lost by a relatively narrow margin. In both these states, the feud-ridden Congress ended up ceding space to the BJP.

Then there is Mizoram. The Congress, once an unrivalled power in the Northeast, lost its last bastion in the region to the Mizo National Front (MFN), an ally of the BJP and constituent of the North-East Democratic Alliance (NEDA) that swept the state.

In Telangana, the Congress-Telugu Desam Party alliance was defeated by K Chandrasekhar Rao’s Telangana Rashtra Samiti (TRS), the ruling party, which won over 70 per cent of its 119 assembly seats.

For the BJP, the results are disquieting. The party, however, is looking for consolation in numbers. It averted a rout in Rajasthan; Chouhan put up a tough fight in MP; and the MNF has turfed the Congress out of Mizoram. Yet, the overall verdict gives the Congress far more to cheer, especially as 2019 looms. Recall that in 2014, the BJP had won 62 of the 65 Lok Sabha seats in Madhya Pradesh, Rajasthan and Chhattisgarh. If today’s results are an indicator of this belt’s mood, the BJP has cause for worry.

The BJP, which had so far relied on the charisma of Modi, is still hopeful that the next General Election will be a presidential style contest between the Prime Minister and Rahul Gandhi, and that this will help its bid to win re-election at the Centre. On his campaign trail, however, Gandhi has been highlighting a farm crisis that could yet come to haunt the BJP if it doesn’t pay attention.