Namvar Singh: What Will Marx Think? 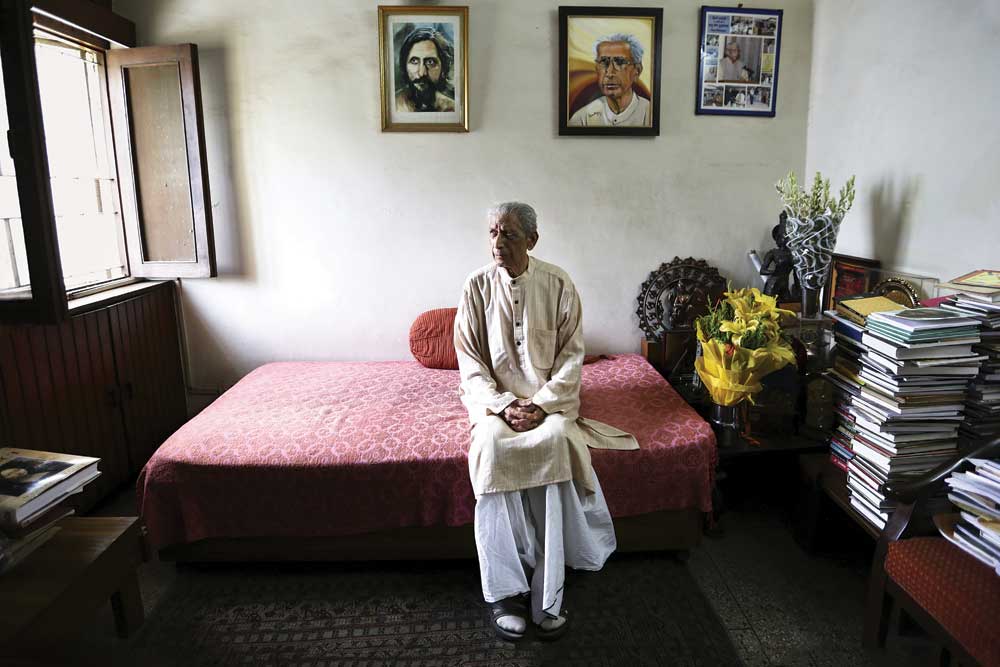 THE BIRTHDAY OF someone who has just turned 90 is usually a cause for celebration. A life well lived is its own reward, and one filled with achievements offers another reason for cheer. But in Delhi’s polarised politics— which gets worse in cultural matters—nothing is immune from political pot shots.

On 28 July, the Indira Gandhi National Centre for the Arts (IGNCA) in Delhi, an autonomous cultural institution, organised a celebration to mark the 90th birthday of Namvar Singh, perhaps the 20th century’s best known man of letters in Hindi. To celebrate the litterateur’s long journey were his colleagues and friends, including the poet Kedarnath Singh, writer Vishwanath Tripathi, literary critic Manager Pandey, and Namvar Singh’s younger brother, the novelist Kashinath Singh. Home Minister Rajnath Singh and Culture Minister Mahesh Sharma, too, were present.

But a row had broken out even before the plan to felicitate Namvar Singh took off. At issue was the Hindi writer’s long association with the Indian Left: he had been one of the leading lights of the progressive writers’ movement since the late 1940s. In the perspective of leftists, a life-long Marxist had ‘defected’—or been ‘co-opted’. Either way, they were alarmed.

“There was lot of pressure on Namvar Singh not to accept our invitation. Two well-known Leftist figures, one a professor of history and another of Hindi in Delhi, called Singh and asked him not to attend the function,” a senior IGNCA functionary tells Open.

Not that the RSS was in favour of Namvar Singh being honoured. The Sangh was unhappy that a Marxist’s work should be celebrated by a Government-funded institution under a BJP-led regime. It is another matter that it was not only an entirely apolitical occasion, but also one that could be held up to show that cultural institutions under an allegedly ‘non-secular’ government could yet display such remarkable independence. “This was a strange situation. It must be remembered that IGNCA is not an RSS organisation. One needs a dialogue across the spectrum with thinking persons in the country. Politics should not be brought into such matters,” the IGNCA functionary adds.

Ultimately, the matter acquired such proportions that the Culture Minister came under pressure ‘to do something’ about the planned event. “An effort was made to create an adverse atmosphere— to the extent that one Leftist writer even said Namvar Singh is sitting in (Narendra) Modi’s lap,” the official says.

I have been a life-long Marxist. But if my party is not in power, does that mean I should run away if someone decides to honour me?

“Finally Prime Minister Narendra Modi was apprised of the situation. He appreciated the decision taken by IGNCA and said it was the right thing to do,” another source tells Open.

Much of what transpired on 28 July has to do with the politics of cultural institutions such as IGNCA and the Nehru Memorial Museum and Library in Delhi. Any change made by the Government is usually seen as an example of the ‘saffronisation’ of such institutions, even if they are staffed and led by people with well-regarded credentials. Such allegations tend to paralyse the new leadership of these institutions. Fortunately, this has not happened at IGNCA and the Namvar Singh event was part of its effort to stay focused on its broad goals.

IGNCA witnessed a change of leadership on 13 April this year. The chairman at the time, former diplomat Chinmaya Gharekhan, was replaced by Rambahadur Rai, a veteran journalist and editor of Jansatta’s News Service. Rai was also one of the leading lights of the 1974 JP movement in Bihar and is known to be an independent-minded person. Within days of Gharekhan’s replacement, there arose a furore on his being ‘booted out’, but it died down soon enough. For one, the Government was well within its powers to effect such changes (which most new governments routinely exercise). For another, Rai is not a party apparatchik by any stretch of imagination.

Almost two months after its reconstitution, the IGNCA’s Executive Committee (EC), its policymaking organ, met on 10 June and took a number of decisions that far from furthering the so-called agenda of saffronisation, displayed a refreshingly apolitical vision of cultural matters. Minutes of the EC’s meeting show this clearly:

‘Members of the EC welcomed the proposal for starting a series of cultural dialogues and decided to name it “Sanskriti Samvad Shrinkhala”. It was also decided that the series should not be person-specific only and should be focused on a variety of subjects and issues related to culture, art, literature, education and lifestyle. It was decided to hold this dialogue once in two months, initially. The proposal to start the dialogue series on 28th July, the birthday of eminent litterateur Dr Namvar Singh was approved.’

And in the true style of a dialogue, the plan was to get hold of a person who would speak to Namvar Singh on IGNCA’s behalf. A documentary on Singh was also planned, one that would remain in IGNCA’s archives.

Namvar Singh’s student, Suresh Sharma, who was doing a PhD when Singh taught at Jawaharlal Nehru University (JNU), was requested to take up the task. Not only did Sharma’s institution— Mahatma Gandhi National Hindi University—spare him for the exercise, it also donated Rs1 lakh for the event; Singh was chancellor of this university twice between 2006 and 2014. As befits an adoring student, Sharma wrote a small booklet—Namvar Singh: Ninety Years of a Journey—in which he described his mentor’s life and achievements.

Much of the Leftist angst against the author has to do with his independence of mind—something the Left has dubbed as his ‘waywardness’. Last year, during the ‘award wapsi’ storm when dozens of literary figures were returning their Sahitya Akademi awards (the ranks included Kashinath Singh, Namvar Singh’s brother), Singh was one of the few who argued against the trend, saying that the awards had been bestowed by fellow writers. He called those returning them ‘headline hunters’, a statement that did not go down well in Leftist-dominated literary circles.

Namvar Singh is unperturbed. “They (IGNCA) decided to honour me and I accepted it,” he tells Open. “Why shouldn’t I? I live in this country. So what if they do not belong to my party? The honour is by an institution and not the Government. I have been a life-long Marxist. But if my party is not in power, does that mean I should run away if someone decides to honour me?”

A LEGEND OF 20th century Hindi literature, Namvar Singh is the author of numerous works. His work on the language of the 12th century epic Prithviraj Raso is especially well regarded. This was the topic of his PhD under the legendary Hazariprasad Dwivedi. As one of the first wave of modernist writers in independent India, Singh explored a host of experimental styles and themes in his writings, both as a poet and as a critic. But all along, he remained—and remains—a Marxist in his outlook and approach to work.

One non-Leftist professor at JNU describes Leftist thinking in India as deeply conformist. Anyone who tries to think independently of established political divides, he says, is viewed with suspicion. “The demarcation is clear: either you belong with the Left or you don’t. There is no room for eclectic thinking,” says the professor who does not want to be named in this article.

There are, however, deeper reasons for Leftist ambivalence and hostility towards Namvar Singh. In the past, he has participated in the debate on Urdu as a second language in Uttar Pradesh. This has been a sensitive issue in a state with a substantial Muslim population, and the literary and political Left felt a deep sense of unease with his position on the matter. The status of Urdu has, historically, bedevilled the Left in India and has even cost it dearly. But at no point has it clarified its actual stance on the subject.

Around the time that Namvar Singh had completed his MA in Varanasi in 1952, a furious controversy was raging among two Leftist writers who were card-carrying members of the Communist Party of India. At that time, the noted Urdu writer Ali Sardar Jafri launched a bitter attack against the suppression of Urdu, saying that “even some of the progressive circles have been infected”. “In words,” said Jafri, “they oppose suppression, but in practice they do it.” His target was Rahul Sankrityayana, one of India’s foremost travel writers and a leading scholar of Sanskrit literature and Buddhism at that time. In response, Sankrityayana said that Urdu protagonists “should get over their fascination for the Arabic script and accept Nagari”.

All this forced Sankrityayana—one of the few eminent scholars back then from the Hindi heartland—to quit the Communist party. He only returned to the Left fold after a compromise of sorts had been arranged.

Today, as the Namvar Singh controversy shows, the fight is no longer over language but has become a bitter one over ‘secularism’ and even the freedom to say what one wants. As long as the shoe is on the other foot (non-Left, and the BJP in particular), it is about freedom of expression. But when a lifelong Leftist differs, it becomes ‘defection’ from Red to Saffron.

Very often, people stick to their ideas even if they become inconsistent with reality. The problem afflicts the Left to a far greater degree than any other ideological orientation. In the West, for example, when intellectuals like Stephen Spender and Jean Paul Sartre pointed out the murderous tyranny unleashed by Stalin in the Soviet Union, their criticism was considered nothing short of trahison des clercs by Communists in their countries. While nothing compared to the scale in the West, Indian tempests have matched the intensity of their Western exemplars.

In 1996, a dialogue of sorts was organised By Rai at Bhondsi, former Prime Minister Chandrashekhar’s retreat. Chandrashekhar, Prabhash Joshi, Nikhil Chakravarty and Govindacharya were to participate. Leaders of all political parties, litterateurs and journalists were invited. But soon there began politics on the issue, and two of the participants—Govindacharya, who was a BJP general secretary at the time, and Chakravarty, editor of Mainstream— backed out. Govindacharya was later persuaded to attend.

It is a sad testimony to the decline in intellectual tolerance in India that such dialogue is no longer considered feasible. Before 1977, there was a healthy culture of such exchange of ideas between political rivals and even intellectuals of different persuasion. But 1977 marked a watershed: after that year, positions hardened and India became a huge camping ground where different groups demarcated their intellectual and political territory.

Today it is almost impossible to violate these forbidden lines, however eminent the person trying to do so may be. This is in no small measure due to the Left’s domination of Indian intellectual life and the virtual asphyxiation of open debate at universities under its influence.

Once again, history of sorts has been repeated with the Left ‘boycotting’ one of its own even before the event had taken place. In Delhi’s rarefied cultural politics, there are some lines that cannot be crossed. Namvar Singh, it seems, has crossed that line one too many times. His erstwhile friends are in an unforgiving mood towards this nonagenarian.