The fear in the corridor 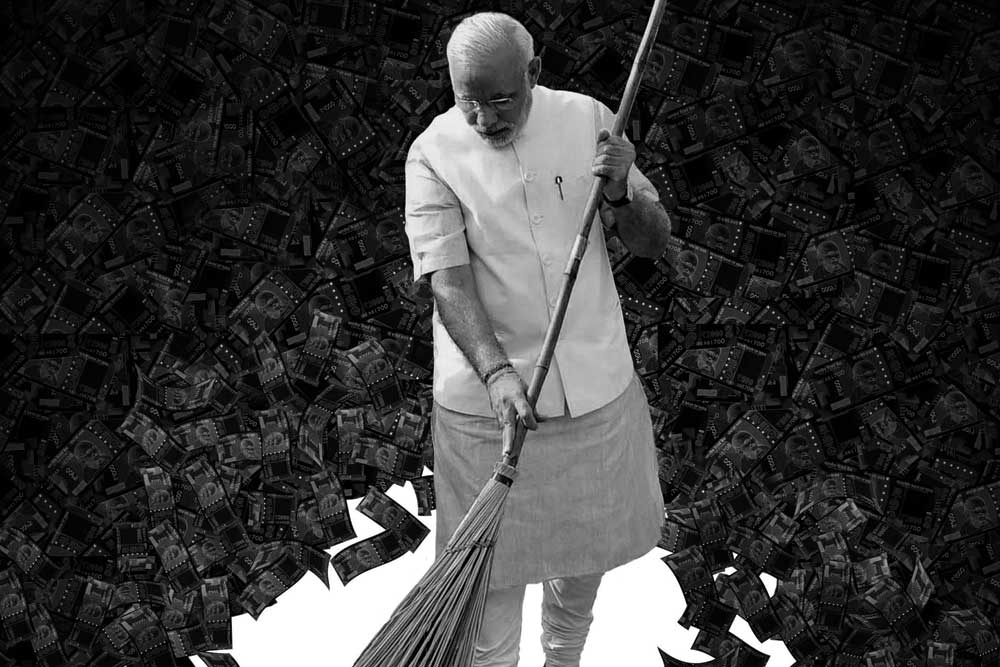 LAST WEEK, Prime Minister Narendra Modi was in Assam. The headlines the next day were all about him inaugurating India’s longest bridge, connecting Assam and Arunachal Pradesh. It was a typical forest for the trees situation. What was forgotten was Modi’s strong emphasis on ridding India of black money and benami wealth. In fact, a bulk of his speech was devoted to this topic. Just a day before that, the Income Tax Department had shared startling information—over 400 benami transactions spread across nine states had been identified up to May 23rd. After demonetisation, the I-T Department has confiscated over 40 real estate properties worth more than Rs 530 crore in Kolkata, Mumbai, Delhi, Gujarat, Rajasthan and Madhya Pradesh. Apart from that, movable property including cash and jewellery worth Rs 600 crore has also been seized. The list of offenders includes politicians, bureaucrats, businessmen and government officials. Thus ended the first phase of the relentless campaign against black money initiated by the Modi Government.

‘Benami’ is one of the most searched words on Google in India. It means when a person buys a property but it is registered in someone else’s name, while the buyer remains the de facto owner. It is used as a tool to hide black money when a person is unable to explain his source of income. The I-T Department now plans to focus its efforts to uncover this form of evasion. Twenty-four dedicated Benami Prohibition Units (BPUs) have been set up across the country to enable swift action and follow up, especially in cases where criminality has been detected. “What we have found is just the tip of the iceberg,” says a senior Income Tax official, requesting anonymity. “What we are working on is something much bigger,” he adds, hinting at the involvement of some influential persons. Sources told Open that the department has already listed around 1,100 properties in nine states worth Rs 2,400 crore, properties that mostly belong to politicians, industrialists, business houses and bureaucrats.

Neither the I-T Department nor the Enforcement Directorate (ED) had expected to unearth such wealth when they started conducting raids after demonetisation. Banks were asked to offer exchange of old notes with new currency. The idea was to keep a check on suspicious movement of huge cash and other illegal transactions. Around 8 pm on November 10th, 100 I-T officials raided different locations in Delhi, Mumbai, Chandigarh, Ludhiana and two cities in south India based on inputs about businessmen and hawala traders who were facilitating the exchange of old notes for a hefty commission. In Delhi, searches were conducted in areas well known for hawala dealings. The raids led to the recovery of huge cash along with documents which indicated money transfers from different cities. The next round of raids took place across several states such as Madhya Pradesh, Rajasthan, Bihar, Uttar Pradesh, West Bengal, among others. “It was a kind of chain reaction, linking one deal to another,” says the I-T official. Two things came out of the raids. One, there were some names that figured frequently in the documents seized from different cities. The other was that there were people who were operating shell companies to siphon off illegal cash and turn it legal. During the financial years from 2013 to 2016, I-T investigations led to the discovery of more than 1,155 shell companies involving over 22,000 beneficiaries. The money used in false transactions of such beneficiaries was more than Rs 13,300 crore.

Neither the I-T Department nor the ED had expected to unearth such wealth when they started conducting raids after demonetisation—the money in false transactions was more than Rs 13,300 crore

The I-T Department struck gold when it raided a hawala entry operator, Jivendra Mishra, in Kolkata. Mishra led the I-T Department to Delhi’s Health Minister Satyendra Jain. The AAP leader allegedly had links with Mishra and two other hawala operators, Rajendra Bansal and Abhishek Chokhani, who were linked to 50 to 60 companies through which funds were routed, sources told Open. Seized documents showed Jain, his wife and parents owning companies with assets the minister had not declared. Jain was asked to appear before the I-T Department in November. But in response to media queries, he maintained he has been called as a witness in a probe and was not under the scanner. However, his denial blew up on his face on February 27th when taxmen served the companies linked to him a notice for seizure of 123 bighas of land in Delhi and shares worth Rs 16 crore. The land belongs to four companies—Indo Metalimpex Pvt Ltd, Prayas Info Solutions, Akinchan Developers and Mangalayatan Projects—allegedly owned by Jain. At the time of questioning, Jain had said that he had ceased to be the director in these companies in 2012, before he joined AAP and contested the Delhi Assembly elections. Interestingly, many of these properties purchased between 2012 and 2016 were in and around the irregular colonies that the AAP government is pressing the Delhi Development Authority to regularise. Once regularised, their prices are bound to go up.

AFTER THE FIRST success, it was easier for the Enforcement Directorate and the I-T Department to connect the dots and nab other kingpins of the black money racket. Regular raids revealed more names of hawala entry operators working as frontmen for several politicians and bureaucrats. “In every case, there would be information on dozens of shell companies used for money laundering,” says an I-T official. “A special team of officers would personally verify all these addresses and in most cases, one address would be used by several companies.”

The names of Vivek Nagpal and the Jain brothers—Surendra Kumar and Virendra Kumar—kept cropping up during investigation. Nagpal is a known hawala dealer in Delhi circles. The Jain brothers were arrested by the ED on March 20th and are currently in jail. ‘During investigation in the matter of M/s NKS Holdings Pvt Ltd and other companies, controlled by Shri Surendra Kumar Jain and Shri Virendra Jain, it was revealed that during the short period of 3 months between the opening and closing of the accounts of these companies, there was credit and debit summations to the tune of Rs 8,000 crore approx,’ read a statement by the ED.

‘Benami’ is one of the most searched words on Google in India and is used as a tool to hide black money. The I-T Department has already listed around 1,100 such properties in nine states worth Rs 2,400 crore

Nagpal and the Jain Brothers have one thing in common— they helped RJD leader Lalu Prasad Yadav’s family in acquiring prime real estate property in Delhi’s Sainik Farms. Nagpal and his wife Aarti had incorporated a company called KHK Holdings in 1998. The company owned a residential property in south Delhi’s Western Avenue Sainik Farms— house number H-27/1—and its turnover was shown as Rs 22 lakh. In 2012, Nagpal and his wife resigned from the directorship of the company and transferred their ownership to Yadav’s daughter, Rajya Sabha MP Misa Bharti and her husband Shailesh Kumar for a measly Rs 98,800. In the company document, the couple have given their address as 25, Tughlak Road, the official residence of Yadav when he was the railway minister in the UPA Government.

Misa and Shailesh had floated a company, Mishail Packers and Printers, in 2002 and used this company to buy another farmhouse at Palam Farms, Bijwasan, in Delhi for Rs 1.41 crore in 2008. A total of 120,000 equity shares of the company of Rs 10 each were issued at a premium of Rs 90 per share—amounting to Rs 1.2 crore—to shell companies owned by the Jain brothers.

On May 23rd, Misa’s chartered accountant Rajesh Kumar Agrawal was arrested by the ED in connection with a money laundering case. The next day, the I-T Department sent a notice to Misa and her husband to appear for questioning in the first week of June. If they are unable to explain the legitimate source of income to buy these properties, the properties are likely to be attached as per the Benami Law.

Several other property details of Yadav and his family have since been exposed before investigating authorities. On May 16th, raids were conducted at 22 places in Bihar and Delhi, including the owners of Patna’s Chanakya Hotel, and Lara Projects—a firm controlled by the RJD leader’s family—and properties owned by Nagpal. Harsh Kochhar, owner of Chanakya Hotel, won a 15-year contract to handle two hotels owned by the Railways Ministry in Ranchi and Puri in 2008, when Yadav was the Union railways minister. Two months earlier, Kocchar had sold a two-acre plot worth Rs 30 crore in Patna to the wife of an RJP MP who had close links to Yadav. Later, the company’s ownership was transferred to Yadav’s wife and two sons.

THE BENAMI PROPERTIES Transactions Act was passed in 1988, but it was not notified for the last 28 years. In October last year, the Central Government made amendments to the Act and got them passed in Parliament. The Act came into force a month later on November 1st. Under the amended Act, the Government can now confiscate property without paying any compensation to the buyer or benamdar, thus prohibiting its recovery. “The new act has given more teeth to the investigating authorities and is a big deterrent for those who make illicit properties, “says Jagannadham Thunuguntla, a financial expert with Karvy Stock Broking. “Initially, it looked as if implementation would be a challenge but the way the Government has stepped up efforts to overcome obstacles is commendable.” Once the Act was enforced, the revenue department advertised in newspapers that benami properties would be attached and confiscated and persons involved could be sentenced to seven years rigorous imprisonment under the Act.

Opposition parties claim the Government is indulging in vendetta politics and are targeting only opposition leaders. “If they think that they can scare me through these raids, they are wrong,” says Lalu Yadav

The I-T Department has its hands full for the next six months, especially because some prominent names are on the offenders’ list. Investigations and raids have been taking place regularly to uncover more names. The focus is on exposing shell companies which facilitate the flow of illegal money in the system. On April 2nd, the ED raided over 100 locations across 16 cities, targeting 300 shell companies that benefited several prominent citizens including politicians. One hawala trader, Jagdish Purohit from Mumbai, was found to be running 700 shell companies with 20 dummy directors. “The documents that we seized indicated that Purohit converted Rs 46.7 crore of illegal cash to legal money for former Maharashtra deputy chief minister Chhagan Bhujbal, who is currently in jail on money laundering charges,” said an ED statement.

Other names like YS Jagan Mohan Reddy, chief of YSR Congress; Yadav Singh, currently in jail for amassing huge property as engineer- in-chief of Noida authority; and senior officials related to the NRHM scam in UP also cropped up during investigation. An investigation is on against 10 senior Government officials regarding their investments and properties. On May 30th, the ED raided four locations in Delhi with connections to former Congress MLA Rajesh Jain and lawyer Rohit Tandon, who is in jail for a money laundering case.

Leaders from the opposition parties claim that the Government is indulging in vendetta politics and have been targeting only opposition leaders. “If they think that they can scare me through these raids, they are wrong,” says Lalu Yadav. Senior JD-U leader KC Tyagi also questions the intention of the Government. “How come there are no raids taking place on any BJP’s leader home or properties? Are they all honest? This is clearly an attempt to destroy the voice of the opposition,” he says.

Union Finance Minister Arun Jaitley firmly rejects the charges. “People in high positions acquiring assets through shell companies is not a small matter,” he told journalists on May 16th. “The day of reckoning has come for many.”