GST: The Life and Times of a Bill

The travails of the GST Bill bring out the best and the worst of Indian politics. Will Congress buckle under isolation? 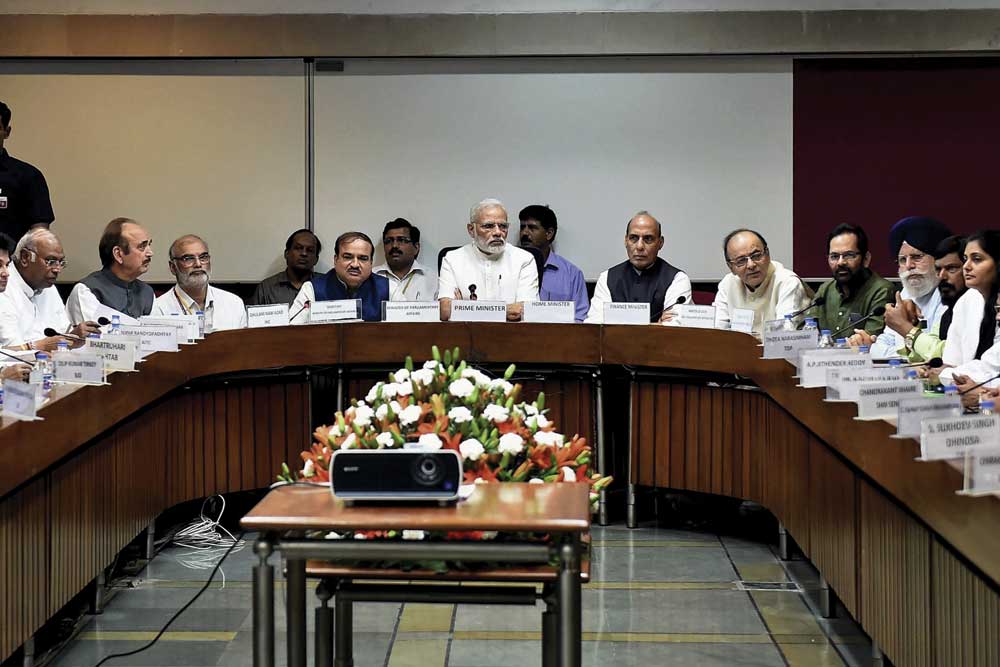 IMAGINE THE TRAVAILS in passing a law that all political parties believe is beneficial to the Indian economy but each has opposed at some point or the other. The fate of the Goods and Services Tax (GST) Bill is a good illustration of Indian politics: short-sighted, transactional and dog-eat-dog to its core. For almost five years now, hopes for the passage of this Bill are kindled before every session of Parliament. More than a year after it was passed in the Lok Sabha, it continues to languish in the Rajya Sabha. But no sooner does the House convene—and adjournments and bedlam descend—than the Bill gets lost somewhere in all the political bickering. That seems to be changing now, after the Congress party finds itself isolated on the issue. That is a story in itself.

On 17 July, a day before the Lok Sabha was to convene for the current session, the Government called an all-party meeting to discuss the GST. Calling the tax a matter of ‘national importance’, Prime Minister Narendra Modi said, “The] issue is not which government gets credit. Important bills, including GST, will be taken up in the Monsoon Session and I hope for meaningful outcomes.” This was the Prime Minister’s pitch to mollify the Congress, the main obstacle to the Bill in the Rajya Sabha. At that meeting, the Congress, too, seemed to have adopted a positive attitude. The party’s leader Ghulam Nabi Azad was all saccharine: “We have not taken any decision that we have to stop a bill. We will support any bill which is in support of people, progress and growth.”

This was a surprising—or perhaps not so surprising—change in the stance of the former ruling party. Over the last three sessions, the Modi Government has gone out of its way to talk to regional parties and convince them about the advantages of the GST law. At different times, Union ministers, including Finance Minister Arun Jaitley, have been dispatched to win chief ministers over. And it seems to be working. At a meeting between Jaitley and state finance ministers in June, all major states—except Tamil Nadu—agreed the proposed tax needs to be rolled out.

At the same time, from a very difficult position even a year ago, opposition to the Bill has narrowed considerably in the Rajya Sabha. The NDA, which has 72 members in the Upper House, has been able to wean away about 70 members of parties other than those in the UPA. While the effort has not been completely successful—for example, the AIADMK with its 13 MPs remains opposed to GST on principle—there are other political opponents of the NDA, such as Bihar Chief Minister Nitish Kumar, who have been converted to the cause.

On 19 July, after meeting Jaitley, Nitish Kumar had this to say to reporters: “I am of the opinion that capping of GST rates is not proper.” For anyone who has followed the debate on the twists and turns in the life of the GST Bill, this is a positive development. Imposing a cap on the tax rate and specifying it in the Constitution is one of the key demands of the Congress, something the Government is not willing to do.

Bihar’s Chief Minister and a number of other leaders of regional parties fear that such a cap will take away their power to raise tax revenues. While the logic of the argument is questionable— after all, GST is supposed to end the plethora of indirect taxes that consumers and producers alike have to face—for the moment, and as long as Nitish Kumar’s JD-U votes in favour of the Bill in the Rajya Sabha, it serves the Modi Government fine.

WHAT EXPLAINS THE welter of positions taken by different political parties in Parliament? Is it mere opposition for the sake of opposition, or are there principled, economic, grounds on which the GST Bill is being opposed? In practice, both factors are at work. Take the Congress, for example. It has been speculated for a while that there is a reasonable section within the party’s parliamentary wing that is in favour of finding a via media to get the Bill through the Rajya Sabha. At the same time, there is a very strong section of the party’s leadership that remains opposed to the Bill out of sheer pique at its defeat in the 2014 General Election. At the moment, the latter group is the main stumbling block. But with its increasing isolation, it is a matter of time before this wing gives in.

“A standard political economy argument is, in a zero-sum game [where you either win or lose], any advantage to your opponent is bad for you. However, this is only true if parties take a very narrow and short-sighted view,” says Maitreesh Ghatak, a professor of Economics at the London School of Economics who has observed the political economy of India closely over the past few decades. He argues that this is a generalised problem and is not something specific to one party or another. “Given the fragmented nature of Indian politics and the fact that there is frequent turnover of leaders, it has become less easy to support some kind of across-the-aisle cooperation, and it only takes a big external crisis to achieve sensible reforms,” he says.

Union ministers, including Finance Minister Arun Jaitley, have been dispatched to win chief ministers over. And it seems to be working

There are others who feel there is little economic rationale for opposition to the GST Bill. “My hunch is that nothing but pure party politics is at work here,” says an economist closely associated with the Modi Government, “There are short-sighted calculations involving session-to-session gain or loss.”

These concerns have a degree of truth to them. Just days after the GST Bill was passed in the Lok Sabha on 6 May 2015, it was sent to the Rajya Sabha for approval. There, instead of voting on it, a combined opposition that included many parties that now support GST, joined hands and sent it to a select committee. This move not only held up its passage, but also foreclosed the Government’s option of convening a joint session of Parliament where it could have turned it into a law.

The select committee went into a clause-by-clause consideration of 21 contentious points in the Bill. It issued its report on 22 July 2015. Four of the 21 members issued dissenting notes. Three of them—Mani Shankar Aiyar, Madhusudan Mistry and Bhalchand Mungekar—were Congress members, and A Navaneethakrishanan of the AIADMK. The Congress had three key demands that they refuses to budge from even today: one, that an 18 per cent cap on the GST rate be specified in Article 246A of the Constitution, so that the pursuit of higher revenues does not let its apex decision-making body, the GST Council, raise rates. Two, that the proposal to levy a 1 per cent additional tax under GST be done away with for its market-distortive effect. Three, that the Bill include provisions for a dispute settlement body. These members insisted on other things as well: for example, that the states’ share of voting clout in the GST Council be raised to 75 per cent and the Centre’s reduced to 25 per cent.

On paper, these are indeed reasonable and ‘economic’ demands. It is true that ‘revenue seeking’ is a problem and that GST is supposed to end the plethora of indirect taxes that prevail in India. These include the Central Sales Tax (levied by the Centre but collected by states), Octroi, entry taxes, luxury tax, purchase tax and various state taxes and surcharges. These taxes have a cascading effect and ultimately consumers and producers end up paying ‘taxes on taxes’. If an upper rate on the GST is not fixed, then in theory, the GST Council and states could end up raising the rate and defeating the main purpose of this reform. Similarly, the 1 per cent additional tax may indeed distort markets and have a cascading effect that poses its own ‘tax on tax’ problem.

But in reality, these concerns hold little water. “The cap of 18 per cent is indeed a very noble thought,” says Harishankar Subramaniam, national leader, indirect taxes, Ernst & Young, a consultancy. “But India is a fractured polity. If the 18 per cent tax rate is specified in the Constitution, then changing it is very difficult, if not impossible. A Constitutional amendment requires a special majority in Parliament. And in the case of changes in tax laws like GST, the assent of two-thirds of state legislative assemblies is necessary. What will happen in case, say, there is an emergency and the tax rate needs to be changed? It will be impossible,” he adds.

“There is enough protection against [states raising taxes]. If the rate is specified in a schedule to the law, that is sufficient. The GST Council has sufficient powers to ensure that no one—states or the Centre—can hijack the law,” Subramaniam says, “The Congress never had a Constitutional amendment bill for specifying the tax rate. Why is it insisting on it now?”

The 1 per cent additional tax has a similar story. When the GST law was first mooted by the AB Vajpayee Government in 2000, one of the first objections to it was the potential loss in revenue for states. In 2007, when the formal process of crafting the law began, it took three years of bargaining and bickering for a way forward to be agreed upon. To begin with, alcohol and petroleum products were kept out of its purview so that states would not be starved of revenue. In due course, these products, too, would be brought under the GST. But in the interim period, states had to be compensated for lost revenue—something the Modi Government has promised to do for five years. Where will this money come from? Unless the Centre allows its fiscal deficit to balloon—which would have its own complications—a way has to be found to generate more revenue. Without the 1 per cent add-on tax, many (if not most) states would not have agreed to a GST.

Finally, the demand for changing the composition of the GST Council also falls in the same class: on paper, good; in practice, troublesome. If the GST Council were to mirror the kind of polity India is, decision-making will become impossible. The present structure of the Council is designed to strike a balance between speed of decision-making and the spirit of federalism.

Viewed from this perspective, the Congress’ demands were meant to drive a wedge between states governments and regional parties on the one hand, and the Centre and NDA on the other. They have an economic cloak, but are in effect political. For more than a year, this strategy has worked. But a combination of tact and patience has helped the Government win over almost all opposition parties.

India is the only country of its size and population to try out a GST. Other countries have done so, but none with a population of 1.2 billion people. It is also a fact that no party anywhere in the world has won an election after implementing a GST or similar law. It takes courage for a party that is in the middle of a political cycle to expend so much capital for a law that seeks to create a unified national market but may not offer commensurate political rewards.