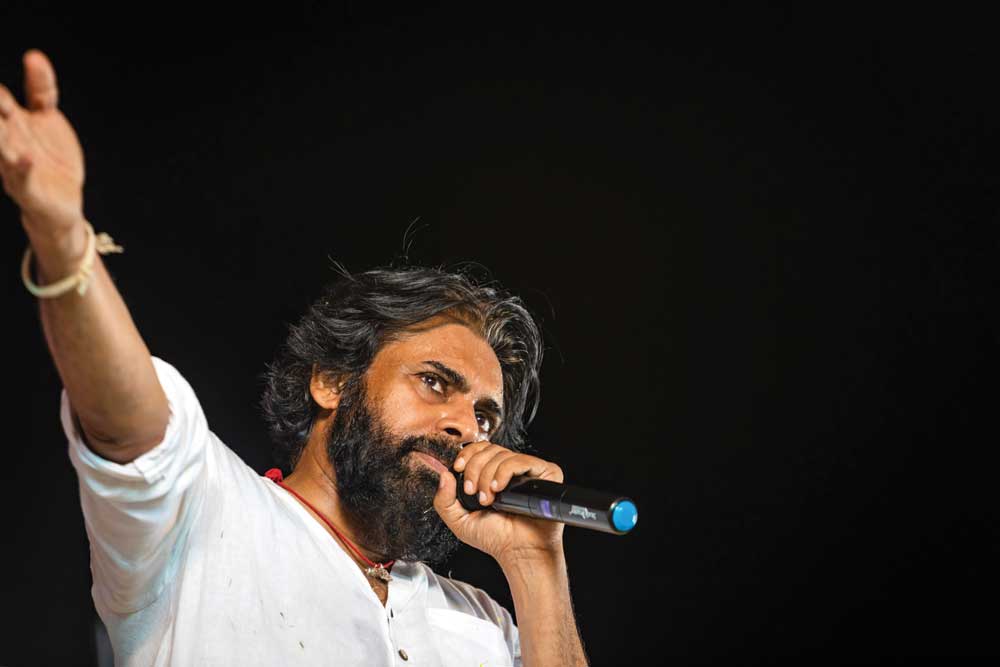 After a series of public meetings in Krishna district, Andhra Pradesh, Konidela Kalyan Babu, better known as Power Star Pawan Kalyan, left a little past 10 pm for Vijayawada along with his convoy. Facing his first election after launching a party, the Jana Sena, in 2014, the 47-year-old superstar had reluctantly agreed to a brief chat between two public meetings, but his security detail could not be persuaded to pick us up en route. In a midnight meeting at the futuristic party office in Mangalagiri, the actor-turned-politician spoke to Deputy Editor V Shoba for over an hour. Excerpts:

You have a formidable fan base but will they follow you into politics?

I don’t like to call them ‘fans’. They support me at a deeper level because they crave political change. You see, I had the luxury of doing cinema I was comfortable with—I worked with newcomers and I handled the creative process for most of my films. I could inject my political thought into my films in the form of a song, a scene. I transformed my fans into followers long ago. I made sure to project as much of my real-life personality on to my characters as I could. So to me, translating my screen image into real life was easy. People are so fed up of Andhra Pradesh politics today, they tell me, ‘It’s not that we want you to form the government. We want you to stick there.’

When did you decide to quit films and enter politics?

Throughout my life, at some level I have always trained to be a politician. Cinema was an accident. I decided to enter politics in 2003. Among my early political inspirations were Prafulla Kumar Mahanta and his struggle in Assam, and my brother Nagababu, who is now our contestant from the Narasapuram parliamentary seat. He was a student leader while in law college, although that wasn’t the kind of politics I wanted to do. I entered politics because I wanted to put an end to the nexus between criminals and politicians. You say a lot of big things in cinema. But in real life you can’t even face a guy who throws his weight around because he is affiliated to a party. I have since been a firm believer in good law and order and the difference it can make to the lives of people. In 2014, after the bifurcation of the state, I supported the TDP because I wanted to play a constructive role. If I had contested alone, I would have split the vote and that would have been dishonest. In the last five years, however, I have been forced to react to the issues faced by the state under the present government and I felt that I should go to the polls.

You have followed in the footsteps of your brother, actor Chiranjeevi, who floated the Praja Rajyam Party (PRP) in 2008, and then merged with the Indian National Congress (INC) in 2011. What did you learn from the experience?

That in politics one cannot afford to go soft. One has to be firm and decisive, at any cost. We lost a number of seats with narrow margins. The toughest job for me is to break the tradition of political families. That is why I say that it will take time and I am in it for the long haul. The other interesting factor is that those who backed Praja Rajyam are now politically mature. They are our generals in the Jana Sena. When I started the Jana Sena, there were just about 100 people with me and we then roped in these [other] people who believed in us, who had commitment and courage.

You constantly attack Jagan Mohan Reddy for being an ineffective opposition leader. But you too are accused of going soft on Chief Minister Chandrababu Naidu.

No way. I walked out of the alliance with the TDP in 2018 because I was opposed to their capitalist, land-grabbing tendencies. In fact, I was soft on the YSRCP at one point when I thought they would raise issues in the Assembly. But they have failed to do that. The TDP has acquired 34,000 acres for the new capital, which is beyond any reasonable need. This greed for land is what I hated about the TDP. They are keeping farmers away. That has been my fundamental fight with the TDP. I personally feel that Chandrababu Naidu has lost control of governance. His primary focus is to come back to power rather than to deliver good administration. In fact, every time I raised my voice against the Bharatiya Janata Party or on policies I disagreed with, [the TDP] would put me down in multiple ways. ‘You don’t know politics,’ they would say. They wanted to create an amateurish illusion of me. So there is no way I will go soft on the TDP.

“I am a pragmatic idealist. I am not a foolish idealist. I understand how much of my idealism I can take into the existing political landscape,” says Pawan Kalyan

Do you see yourself as a Kapu leader? The TDP has promised five per cent reservation to Kapus.

No, I don’t see myself as a community leader. We don’t choose which family we are born into. I never grew up in a caste environment. I look at Kapu reservations very objectively, like any other issue. Fundamentally I am disappointed that we still have to fight for reservations. Where did we miss the bus? Why can’t we create opportunities for everyone? Jagan Mohan Reddy is very clear that he cannot give reservations to Kapus. And the TDP is waving a cosmetic proposal that may never come through.

Your manifesto promises complete drought alleviation and a high court bench in the backward Rayalaseema region. But both seats you are contesting from—Bheemavaram in West Godavari district and Gajuwaka in Visakhapatnam district—fall outside that.

My original plan was to contest from Anantapur. I have a support base there but I don’t have many second-rung leaders. I would have had to campaign on my own. In Godavari and Vizag we have established leaders who can take the campaign to the people. At the party’s request, I am contesting from two seats. It involves calculations about the neighbouring constituencies that I can impact by personally contesting from the region.

Are you pitching yourself as a sub- regional party that, like the Janata Dal (Secular) in Karnataka, could play kingmaker?

JD(S) leaders are seasoned politicians. I am glad to hear that people think I can influence the outcome in 60 constituencies. To have such an impact in a short time feels great. But I am also very patient and cautious. We are building a party with an ideology.

What is the ideological statement you are making?

I am a pragmatic idealist. I am not a foolish idealist. I understand how much of my idealism I can take into the existing political landscape. That is the reason I have given seats to people who have come from nowhere. I am grooming the next generation of leaders. Because without new blood, politics will only decay.

Who do you blame for the failure to get special category status for Andhra Pradesh post-bifurcation?

I blame the TDP, I blame the BJP and even the Congress. They caused havoc in one part of India. The damage they have done will have a ripple effect in the years to come. It is not going to stop. For us, it’s not about the extra funds. It’s about a pledge, about political accountability and about how politicians can go back on their word without fear of consequence. There is a dangerous trend in Indian democracy where the ruling party and the Opposition form a nexus on certain policies and the people lose out as a result.

You have not only accused the Telangana Rashtra Samithi (TRS) of covertly backing the YSRCP but also implied that Telangana is not a safe place for the people of Andhra. Why do you relentlessly criticise the TRS?

The TRS hated Jagan Mohan Reddy for opposing the Telangana movement. They hated faction groups from Andhra. They drove them out. They should have remained neutral after bifurcation instead of meddling in Andhra politics. Or they should enter politics directly. That’s my argument about the TRS. I have respect for their fight but they are disturbing the political atmosphere here. Identity politics is on the rise the world over and this is going to be a tough reality to face in the coming years. It’s not like we are a different race—we even speak the same language, just a different dialect. In a way the TRS is helping the TDP. They may think they are helping the YSRCP, but they are helping the TDP by creating a sentiment favourable for them. Political families have an unsaid understanding with one another. They do not create space for people who want to talk about suppression. They’ve made enough money, they’ve enjoyed enough power. It’s time to give way to the new generation.

You were an admirer of Prime Minister Narendra Modi. What changed your stance?

India needs a strong and decisive leader. So many of us rallied behind Modi with a lot of admiration and belief and care. But we want to love our leaders, we don’t want to be scared of them. The kind of psychological terror that the BJP is perpetuating, India cannot take it.