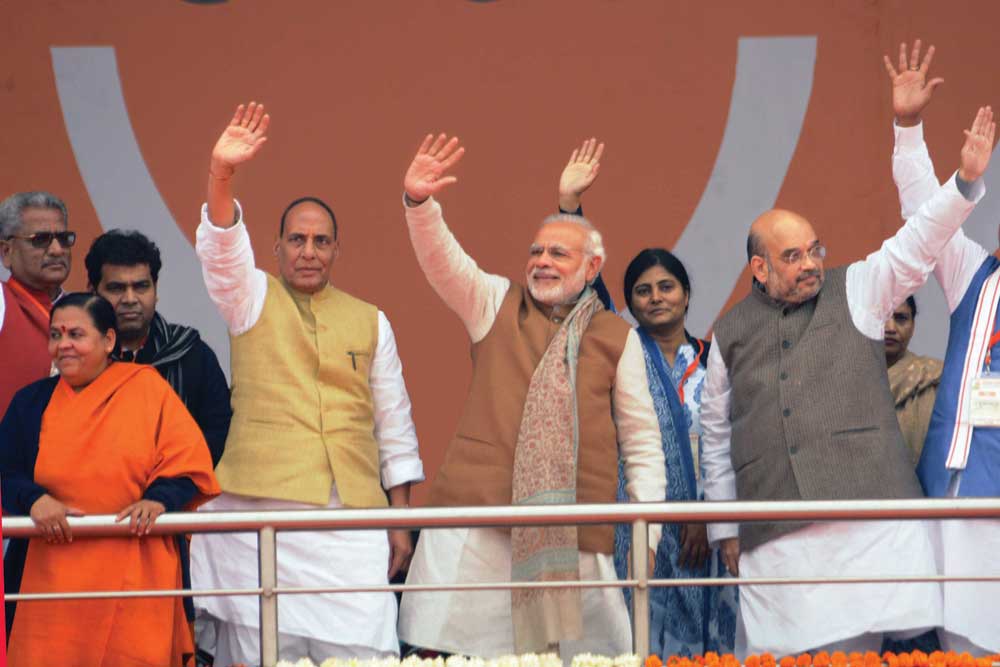 Emboldened by its emphatic win in Uttar Pradesh and stunning electoral gains elsewhere, the Bharatiya Janata Party (BJP) is now looking to expand its spread in the south just as it did in new turfs such as the North East, especially in Kerala where the parent outfit, the RSS, has more than 5,600 shakhas, the largest figure for a single state. According to the RSS, there are 56,859 shakhas across the country.

Though the RSS has picked up in organisational strength in the state since the end of Emergency in 1977, the BJP, its political arm, or its predecessor Bharatiya Jana Sangh, has had far disproportionate electoral success. The BJP opened its account in the state assembly for the first time only in the 2016 assembly polls, winning one seat in the 140-member House. Senior BJP leader O Rajagopal was elected from the Nemom constituency in Thiruvananthapuram district with a majority of 8,671 votes, eating into traditional Congress votes to batter his key opponent who belonged to the Communist Party of India (Marxist) (CPM).

Though the CPM-led Left Democratic Front cruised to a near two-thirds majority in the last year’s polls, the BJP saw its vote share rise significantly from 6% in the 2011 state election to more than 15%. The party, which had aligned with Bharath Dharma Jana Sena (BDJS) led by Sree Narayana Dharma Paripalana Sangham general secretary Vellappalli Natesan to pull in the numerically preponderant Ezhava votes, came second in seven assembly seats, much to the anguish of the Left and the Congress-led United Democratic Front (UDF).

The ruling party at the Centre, which expects to open an account in the state in the 2019 Lok Sabha polls, has also vehemently campaigned to highlight the ongoing violence between its cadres and those of the CPM, which rules the state, as a witch hunt by the Marxists. The BJP and the RSS contend that the CPM is resorting to murderous ways to stem in the growth of the BJP which has made deep inroads in the state, securing huge gains even in local bodies polls. Ever since new chief minister Pinarayi Vijayan took over last May, the BJP and the RSS have launched an aggressive nationwide campaign claiming that CPM was out to physically eliminate their cadres for fear of losing their turfs.

The Sangh also dispatched a handful of ‘observers’ to Kannur — which it has termed as the epicentre of political violence targeted at RSS and BJP activists — to ‘capture’ the plight of its workers and to initiate a nationwide campaign against the Left in Kerala. Crime records show that both the RSS and the CPM cadres were equally responsible for a spate of violence in the northern district and elsewhere. Between 2000 and 2016, RSS lost 31 workers and the CPM 30. However, the RSS-steered blitz successfully managed to project workers of the Hindu nationalist party as more of victims than perpetrators. Meanwhile, in recent weeks, RSS and BJP workers have taken out public processions against “Redtrocity”, a Sangh nomenclature for violence unleashed by the Left against its workers, from Bhuj in Gujarat to Kanyakumari in Tamil Nadu to Korba in Chhattisgarh and Dibrugarh in Assam to Shimla in Himachal Pradesh.

The RSS and the BJP have claimed that neither the Left nor the Congress, which have shared power since the formation of the state in 1956, have protected the interests of the Hindus; the state accounts for over 54% Hindus while close to 45% are either Muslim or Christian. The prosperity of the minorities in the state many of whom have hit pay dirt thanks to the Gulf Boom has triggered much jealousy. Christians and the Muslims also enjoy enormous political power. As of now, the CPM wields tremendous clout among the Hindus of Kerala, which prides itself for its high social indicators. Yet, hopes are high in the BJP that the appeal of its campaign spearhead Prime Minister Narendra Modi and the tactics of party president Amit Shah will help it pull off stunning poll gains in 2019 in a state whose political narrative has so far been defined by bipolar contests between the Left and the Congress-led coalition.