Amarnath and the Politics of Selective Protest 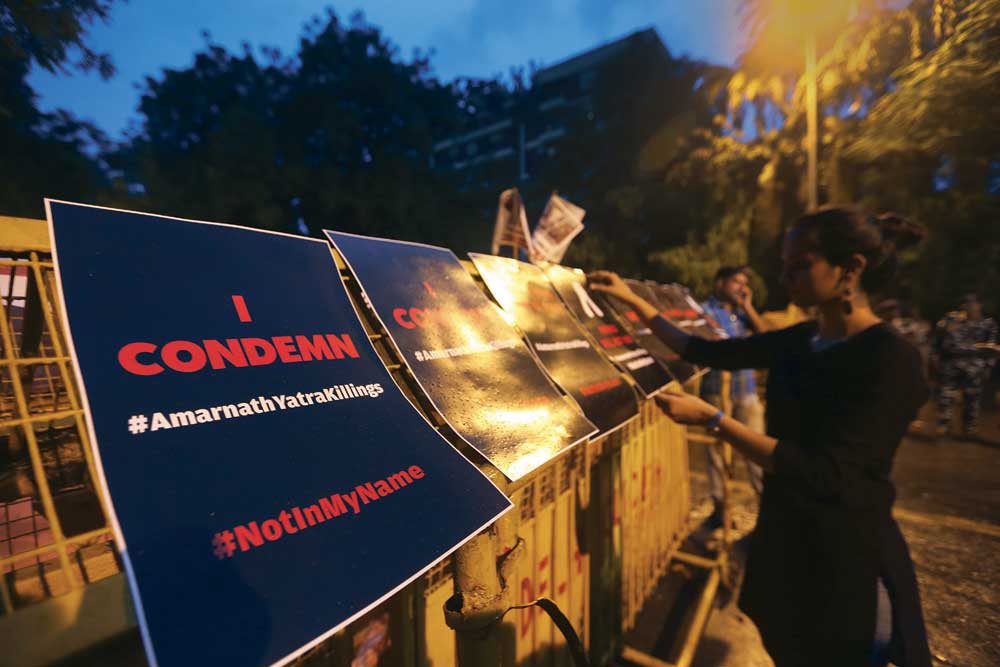 THE ATTACK IN Kashmir on Amarnath pilgrims on July 10th has evoked condemnation all over India. Those who have registered their protest against these killings include ordinary Kashmiri Muslims as well. Many of them have businesses in other parts of India; many have their children studying or working in cities like Delhi and Bengaluru. Their outrage is genuine. But there is also fear of a backlash—trepidation that the terrorist strike on Hindus in Anantnag may have knock-on effects elsewhere that could place their kin in harm’s way.

That is also probably why Islamist extremists carried out the attack in the first place. A secret communication issued by the Inspector General of Police in Kashmir on June 25th had said that terrorists were planning to attack pilgrims in large numbers so that it results in the ‘flaring of communal tensions throughout the nation’. The missive had advised all concerned officers to remain alert and maintain utmost vigil. But the attack has still happened, resulting in seven deaths and injuring scores of others.

What occurred after the attack is also notable. Amidst the furore on social media over why the Government had failed to protect pilgrims, senior leaders in New Delhi came out in defence of Kashmiris in the Valley. In response to a tweet calling for all-out action in Kashmir, Union Home Minister Rajnath Singh declared that it was his job to protect Kashmiriyat and that every Kashmiri was not a terrorist. He is right, of course. In the Valley, where over six million people live, everyone is not a Pakistani sympathiser. Nor does everyone swear allegiance to the cause of an Islamic caliphate.

It is not as if Amarnath pilgrims have been attacked for the first time. There have been several attacks on the yatris over the last 27 years, including one in August 2000, in which 21 pilgrims and 11 others were killed at the Yatra base camp in Pahalgam in South Kashmir. In 1994, a few years after the eruption of insurgency, two Amarnath pilgrims were abducted from Anantnag, tortured, and hanged from a tree by terrorists of the Harkat-ul-Ansar. In all these years of sporadic mayhem, there have been several provocations that could have led to serious disharmony elsewhere in India. But now, in these rather fragile times, every spark could be a potential fire. That is one reason why the Centre and senior ministers like Rajnath Singh, among others, have tried to play down the incident by talking about Kashmiriyat and the state’s ‘composite culture’, of which there has been scant evidence at least for the last three decades. The administration in Hindu-majority areas like Jammu has been on alert for a potential backlash by Hindu extremists there. Thankfully, no violence has been reported so far.

Whether Kashmiriyat is alive or not may be a subject of debate. But why should the lynching of a man or an attack on a bus carrying innocent pilgrims be offset with justifications?

But it is also a sign of the times that a moral clarity so badly needed is missing from many liberal narratives of the country’s state of affairs. One significant example of it is the recent ‘Not in My Name’ protest, which was organised to raise a voice against a string of lynchings in India. While many well-meaning people participated in these public demonstrations, the hypocrisy of some organisers was blatant. In Delhi, the organisers had put up a ‘lynching map’ with red dots on locations where such killings had taken place, with the corresponding names of victims. Against Kashmir was the name of a Zahid Rasool Bhat, a teenage truck driver from Kashmir who was burnt to death by a Hindu mob in October 2015 near Jammu. This poster’s makers had memorialised Bhat, but failed to acknowledge the lynching, just a few days before the protest, of a Kashmiri police officer Ayub Pandith. The officer was lynched by an Islamist mob at a mosque in downtown Srinagar. Similarly, from Jharkhand, the names of Muslim victims—suspected of child-lifting—of a lynch mob were put up. But the names of three Hindus who met the same fate on the same suspicion in that very area were missing. Of course, many among the protestors did take the name of Ayub Pandith. But why be so selective in the representation that it defeats the whole purpose of organising such a protest?

On social media, many who have been vocal about incidents of lynching and have attended ‘Not in My Name’ campaigns in Delhi and elsewhere are saying that there is not a single Kashmiri they know who has not been angered by the attack on Amarnath pilgrims and has not condemned it. That may be true. But it is also true that many of them also consider the slain militant commander Burhan Wani a ‘freedom fighter’. Many residents of the Valley glorify terrorists and their supporters. In the last few months, terrorist commanders like Zakir Musa have issued video statements that their fight in Kashmir is not for freedom or nationalism, but for the supremacy of Islam, the cause of an Islamic caliphate. Kashmir’s so-called civil society, which also espouses the cause of azaadi, has been deafeningly silent on this. A day after the attack, some of them came out in Srinagar in the name of condemning the attack. But their effort was to create more confusion by demanding that a ‘credible investigation’ be launched to establish who planned this attack, among other crimes perpetrated in the troubled state.

Many of these demands end up providing indirect justification for such terrorist attacks. Immediately after the killing of Amarnath pilgrims, some local Kashmiri journalists began to spin the news, saying that the bus was not registered with the authorities. Then it was made out as if the bus had been caught in a crossfire between terrorists and security forces. Some said the attack was on a police camp. These theories were floated even as it became clear that the terrorists’ sole intention was to attack the bus carrying pilgrims. It did not matter whether it was registered or not. It did not matter whether they were going to the pilgrimage spot or returning from it. It did not matter whether they were pilgrims or tourists. What matters is that they were killed by terrorists who believe in a certain ideology and want this to cause bloodshed in other parts of India. A similar spin was given to Ayub Pandith’s case as well, where it was argued that the mob had killed him because he had opened fire on a few boys with his service weapon. That a lone policeman surrounded by a vast mob would be lynched by them and his lifeless body dragged and kicked caused so little consternation among a section of people as to justify the killing is an extreme cause of worry. But terrorist sympathisers and those who are a part of jihadi networks in Kashmir will lie for their cause. But what does it say about intellectuals in Delhi and Kashmir and elsewhere? Whether Kashmiriyat is alive or not may be a subject of debate. But why should a man’s lynching or an attack on a bus carrying innocent pilgrims be offset with justifications? What explains their selective representation?