In the vanguard with the Captain 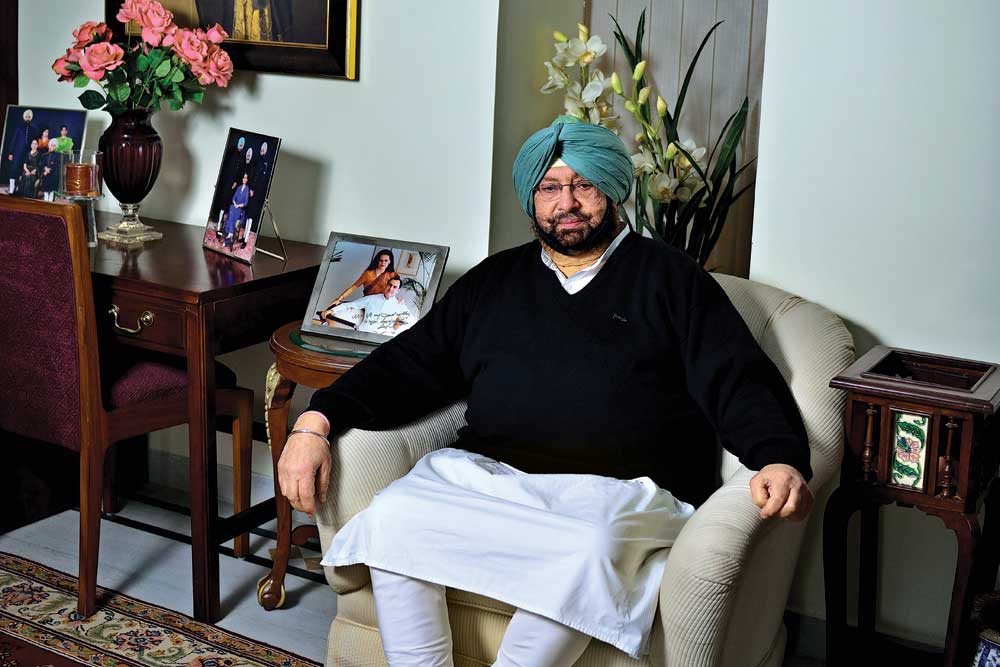 SOON AFTER THE electoral verdict in favour of the Congress party in Punjab, a video clip surfaced showing Aam Aadmi Party (AAP) leaders of the state in an exuberant mood. The party’s convenor, Sanjay Singh—originally an inhabitant of Uttar Pradesh—is seen predicting a massive win for Bhagwant Mann, AAP’s public face in Punjab. The clip shows Singh and other AAP activists singing songs joyfully and talking on a cellphone, imagining a tally of 100 seats in a 117-member house.

This clip is perhaps the best marker of what happened in the state Assembly elections. An insurgent party—intoxicated with political success in a mini-state—imagined it could simply walk into Punjab; an incumbent party—overshadowed by charges of corruption and drunk on arrogance—is vanquished at the hustings. The field, in the end, was taken by the Congress—a party widely expected to share the spoils closely with AAP in a field marked by wild psephological prophecies.

If one ignores the predictions and the banter, Punjab’s voters left enough hints of their preferences. Two broad themes sketch the 2017 electoral verdict. One, the limits of insurgent politics in the state have hardened political choices. Two, the alteration of power between an inward looking political party and one that is more open to explore new ideas even if they have proved elusive to implement. It needs no elaboration that the Shiromani Akali Dal (SAD) has been an inward-looking constant in Punjab politics while the Congress has tried to look for options and experiments.

After a decade in power, the SAD was exhausted by a lack of ideas, poor governance and charges of corruption that followed its top leaders even if nothing conclusive ever emerged. In the end, the miasma of doubt that had long engulfed the Badal family among the electorate proved sufficient for electoral defeat. Voters in the party’s bastion—southern districts that benefited most from the Green Revolution and home to relatively larger landholdings— abandoned the SAD. In this region, accounting for 69 seats, the party managed just eight seats in contrast to the 33 it bagged in 2012.

If this was along expected lines, what turned out to be unexpected was the fate of AAP which was expected to sweep this region. Two things undid the insurgents from Delhi. One, their narrow mathematical idea of politics betrayed them. Sitting in Delhi can distort one’s sense of Punjab’s political geography. Looking at the split of 117 seats and imagining the chunk of 69 to be the key to power, AAP concentrated all its firepower here. Looking back at the campaign, it is clear that its strategy was tailored to wrest the bulk of seats from the region. In doing that, the other two regions—the northern and Central districts that account for 48 seats—were ignored almost wholly. The bandwagon effect from the south was expected to wash and sweep seats elsewhere.

If that wasn’t narrow enough, the Delhi crowd compounded error with folly: it imagined SAD to be its bigger foe in the south and not the Congress. In doing so, a fatal miscalculation was made. In the last six months it was obvious that SAD had become deeply unpopular in entire Punjab, a fact that should have alerted AAP brass about who their main rival was. In the event, it did not.

The ‘southern strategy’ had another element: competing for ‘Sikh’ votes by engaging with a radical fringe that at one time sympathised, if not actively connived, with Khalistani secessionists in the 1980s and 1990s. In January, Arvind Kejriwal stayed overnight at the home of an alleged Khalistani sympathiser—at that time erroneously described as a former militant—causing an uproar in the state. Then, allegations continued to dog AAP that it was hobnobbing with the Akhand Kirtani Jatha, another fringe Sikh radical outfit. These, and other, allegations were denied, but not too vigorously. If the denials were obscured, the intent was not. When the votes were counted and some examination carried out, it became clear that the ‘Hindu’ vote in the south—largely urban and urbane—had deserted AAP and only a part of the committed ‘Sikh’ vote was taken from SAD. The bulk of the vote went to the Congress. AAP barely managed 20 seats, with 18 coming from the south and only two elsewhere.

This is not an ordinary challenge for Amarinder Singh. Contrary to the image of Punjab being a rich state where everyone basks in happiness, the economic reality is grim

What eluded everyone—confused by the appearance of a third outfit in a two-party state—was that the competition was straightforward: between the Congress and the SAD. This is a historical pattern that has existed in Punjab—and its predecessor the Patiala and East Punjab States Union or PEPSU—since the mid-1950s. The basis for rotation between the two parties (quite regular now) has strong social and religious roots. The Congress is the liberal party in Punjab, with an even sprinkling of Sikh and Hindu leaders even if the top job has largely remained in Sikh hands. On paper, the party is considered pro-business. The result is that it always explores non-farm, non-agricultural opportunities for the state, including seeking investment from large industrial houses. This, at least, is its outlook when it comes to power. When it fails, so do the politico-economic horizons which then become inward- looking, seeking to redress ‘grievances’ of the farming community, largely Sikh. This yo-yo trend has been around for a while, except in the last one decade when the SAD has dominated Punjab. It is the Congress’ turn to govern Punjab under a rainbow coalition spread evenly across the state with a hefty majority of 77 MLAs.

SO WHAT’S NEXT for the state? And what can be expected from the Congress’ tallest leader in the state—Captain Amarinder Singh—a former Indian Army officer and paterfamilias of the Patiala royalty?

There is plenty on Singh’s plate as he goes about trying to fix a broken state. This is not an ordinary challenge. Contrary to the image of Punjab being a rich state where everyone basks in happiness, the economic reality is grim. The time when the province led the country in per capita income is long gone. In the 1980s, this was indeed true. By 2005, most major states, except well-known laggards like Bihar, had overtaken Punjab on this score. Along with this decline came another, unwelcome, increase: that of debts and other economic maladies. In the budget presented last year, debt was estimated at a staggering Rs1.25 lakh crore. Punjab’s debt to gross state domestic product (GSDP) ratio has hovered around 32 per cent for many years now, a full 10 percentage points above its comparable peers in non-special category states. Not unexpectedly, the state’s interest payments have shot up: the state now routinely spends 18 per cent of its revenues every year just on interest payments. This is again well-above the comparable mark for states in Punjab’s class.

But mismanagement is just one part of the story of decline, which has a considerably longer timeline. One can draw this back to the day the then Finance Minister Manmohan Singh delivered his Budget speech in 1991, opening India for business. Until then, Punjab had provided an abundant supply of foodgrains to an otherwise food deficit country. The Union Government routinely sent demarches to the state government to ensure that area cropped for wheat did not fall. Long used to being courted for the valuable commodities it offered, the Centre jealously monopolised the purchase of wheat and rice. In turn, Punjab received a huge dose of money every year, injecting vitality in its economy. By the mid-1990s, this story had changed. Not only did the quality of output go down—consumers in far-off Assam refused to accept ‘Punjab rice’—but so did the economic landscape that made Punjab rich. In the years Punjab was living it up, southern states like Tamil Nadu, Karnataka and Andhra Pradesh made substantial investments in infrastructure, education and healthcare. These essential investments were made in spite of these states being relatively poor. In comparison, Punjab undertook few such steps.

The result was that when India’s economic boom took off and investors—foreign and domestic—came looking for opportunities, they bypassed Punjab and went for these states. Today Punjab is no position to play catch up with them. Staring at an ecological disaster due to the unrelenting use of fertilisers and chemicals and having virtually no resources to invest, the state now appears clueless.

This is the juncture that Punjab finds itself in as it takes another ‘forward looking’ turn under a Congress government. Compared to his political peers, Singh understands his state’s recent economic history much better. He is also not constrained by what he calls “Shambhu Border mentality”—his expression to denote the inward-looking mind-set that characterises the Akalis.

While Singh’s intentions are not in doubt—he has repeatedly highlighted Punjab’s economic woes—he faces serious hurdles, some of them very difficult. One, the state is in the grip of populism of the kind that is unique for an advanced Indian state, making it hard to be undone. Looking after ‘farmer interests’ has turned into an endless flow of subsidies—both central and state. Any effort at ending this addiction is likely to court resistance. Singh’s advantage lies in his 77 MLAs on whom he can count, at least in the initial years of his tenure, to blunt this. Two, any economic transformation is beyond the means of the state government and has to involve the Union Government. If Punjab’s cropping pattern is to change from wheat and rice to something that gives value to its farmers, expertise and financial help from the Centre is essential. Both are unavailable in Punjab. Here, Singh is likely to face political difficulties for two reasons. Not only is the political complexion of the governing party at the Centre different, but if the new Chief Minister tries to cosy up with Prime Minister Narendra Modi for developmental reasons, the Congress may not look kindly at him. This is a by-product of a vitiated political climate.

Finally, Singh’s biggest problem is one of perception. Investors are wary of Punjab for many reasons. There are other states that offer better economic opportunities. Why should they come to Punjab? Unless this question is answered with abundant imagination and willpower, Singh’s 77 MLAs may not serve any purpose.