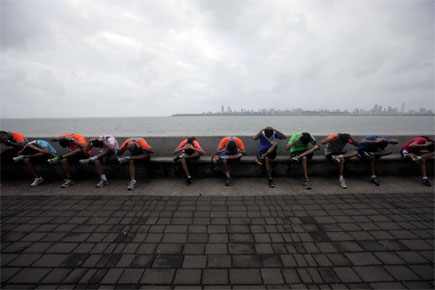 
Bhasker Desai exports garments but seems to have an imported accent. His pronunciation is a hotchpotch of Gujarati and Western styles. “It is a fake accent,” he says with a grin. “To impress the ladies.”

Desai is a trim man in his sixties with a nascent grey French beard. He is a long-distance runner. He started running for health reasons. Around 2006, his triglycerides were over 900. He also runs for his ‘angels’. Who they are, he won’t say. When asked again, he reveals they are his deceased wife and son.

We are at Marine Drive at about 8 on a cloudy Sunday morning, among hordes of runners practising for the marathon season, which begins with the Hyderabad marathon on 25 August. A little away from us is Anil Ambani, doing stretch exercises on the parapet. Not far from him is a poor but strong young man in a sleeveless vest and jeans, doing squats. There are also several running groups that have finished their workout. Members of one group eat greasy mawa cakes out of a big cardboard box. There is a lot of noise and bustle. But when Desai mentions his bereavement, everything seems to go quiet for a moment.

The sea and sky over Marine Drive are grey. However, the runners in their fluorescent running gear provide a bright foreground, as if fighting the gloom of the elements. There must be about a thousand people at the Nariman Point stretch of Marine Drive alone. Others are on their way here, from Chowpatty, Malabar Hill, Dadar or Bandra. It can also be presumed that there are more runners at Juhu beach, on the forest trails of Aarey Milk Colony and indeed all over Mumbai. What would be the number of people running in the city at any given time on weekends? 50,000? Twice that figure? Even more? No one has really counted, but it is a lot. Spots in the Mumbai Marathon take only a little longer to fill up than Chhagan Bhujbal takes to colour his hair. (The 65-year-old politician, rarely seen without a dye job, is the patron of the event.) Running has well and truly taken hold of the city.

On weekends, Marine Drive feels like Everest Base Camp. It’s the same explosion of mass interest in a so-far specialised activity, the same ambition to scale a peak, although one of another kind. But while the common motivation for people to run is the promise of health and extended youth, some do it for other reasons.

Desai, emotionally rudderless after his loss, seeks solace in his running group at least for those two or three hours every other morning. The running fraternity has embraced him. “No marathoner worth his salt will not know of BD,” says a running acquaintance of his from Bangalore. Desai is the joker of the bunch as well as its cranky old man (in his own words) whose command cannot be disobeyed.

During breakfast after the run at Stadium Restaurant near Churchgate Station, he teases Simta Jha, also part of the group, that she runs because she is in love with someone.

Desai has delegated the day-to-day operations of his export business to others. This enables him to focus on running and shorten the time he clocks to qualify— within his age group—for elite marathons around the world. He was at the Boston Marathon earlier this year when the blasts happened. He has run in Athens and Washington DC. It was in Washington DC in 2011 that he met American running legend Bill Rodgers, who advised him on what to wear for the cold weather race. He also gave him an autographed card that said, ‘Desai, let’s run forever.’ Says Desai, “Being Indian I got greedy and asked him to sign my bib as well.” Rodgers obliged, writing, ‘Desai, see you at Boston.’

THE NEXT SUNDAY, at another end of the city, Kripa Sagar, 47, wakes up at 4 am in her house in Nerul, New Bombay. She drives 30 km to Nere, near the base of the hill station of Matheran. From Nere, Sagar and about 50 runners run in the direction of Panvel, covering a scenic undulating route and encountering only the odd State Transport bus, cow or stray dog. At one point, it starts pouring. “I felt like a child,” Sagar says.

Running helped Sagar banish from her life the Benson & Hedges Lights that she once could not do without. She had started smoking in college. Attempts over the years to give up were abortive. A mother of two and a businesswoman dealing in electronic instrumentation for metallurgical industries, she had settled into a groove of work, family life and five or six cigarettes a day. She says the only act of physical labour she subjected herself to those days was working the TV remote control. Life changed with the visit of a cousin in December 2010.

“She was training for the marathon. I asked her ‘Should I come?’ I ran 1.4 km. It was the first time I had run that much in my life,” Sagar says. “I dreamt of running for the longest time, but something always held me back. First, the kids were small. Then there were social inhibitions. Or people would be worried about pollution or stray dogs chasing me or a car knocking me down.”

Sagar, however, stuck with her new hobby. She lost weight and her posture improved. “My body started to mean more to me,” she says. And on 10 May 2011, in a move reminiscent of the film This is 40, she junked the cigarettes. She says she hasn’t smoked since. Now a seasoned runner who competes in 11 races a year, including full marathons, Sagar is launching a campaign called ‘Take a Breath of Fresh Air’. It will encourage people to stop smoking and take up running.

Starting with the Hyderabad marathon, Sagar plans to run a race every month in each state and Union Territory of India and is looking for sponsors of the project.

“Usually smokers are miserable when trying to kick the habit, but it is possible to give up cigarettes and be happy,” Sagar says. “There is a direct link between running and smoking. You smoke because nicotine releases chemicals in your blood that give you a high. Running releases the same chemicals. That’s the runner’s high.”

The desire to lead a healthier life also made 28-year-old corporate law firm associate Vinay Butani slip his tired feet into running shoes. Butani works 12-13 hours a day. On Saturday nights, he would party with friends at High Street Phoenix, not far from his office. “We would be out till 2 or 3 am and wake up late on Sundays,” Butani says, eating his post-run no-butter-please egg bhurji at Stadium Restaurant. “It did not feel healthy.” He participated in the Mumbai Marathon in 2012, finishing the 21 km half-marathon in 3 hours and 17 minutes.

Blood tasted, he wanted more. Hyderabad followed. He did 21 km in 2 hours 40 minutes. In this year’s Mumbai Marathon, he was home in 2.07 hours. His target for the 2014 Mumbai Marathon is a common dream among amateur-yet-serious runners who run the half-marathon: a ‘sub-two’. Roti, kapda and a sub-two are the basic necessities of this breed. “My friends have disowned me,” Butani says, “but my boss takes me seriously.”

The factors that precipitated Sayuri Dalvi’s adoption of the practice were more serious. Her ex-husband was alcoholic and abusive. Her eight-year-old son Vihaan is autistic. For a while, she sought respite in food. A petite woman of 50 kg, she bloated to 70 kg. “My father said ‘enough is enough’,” Dalvi says. With three months to go for the marathon, she started training. The one hour of running helped her get fit and vent her frustrations.

Listening to music—the title song of the film Lakshya was one of her favourites— as her feet pounded the earth, she recovered her determination to deal with the challenges of the day.

If Kripa Sagar uses running as a vehicle to drive home a message about smoking, Dalvi is doing the same with autism. And she is back to 50 kg. Asked how running changed her life, she says, “It got me into shape. It made me feel strong emotionally and physically.” Life is still tough for Dalvi. She lives in Mulund. Her son’s school is in Govandi and has therapy sessions in Andheri. Her day starts at 5 am and ends at 11 pm. “I have made sacrifices. I hardly socialise. But I’m happier.”

Writer Haruki Murakami (one can’t avoid bringing up Murakami San on this subject) is a running enthusiast and also a beer aficionado. After the last yard of the 42.195 km marathon course is conquered, he likes nothing better than to submit himself to the simple pleasure of a cold beer. Ram Venkatraman’s story is somewhat similar. The 51-year-old, 5 foot 8 inch company secretary from Mumbai loved beer. He also was partial to dessert. His wake-up call came not from the shrill bell of a clock but from the quiet condemnation of a weighing scale. His indulgences had puffed Ram up to 84 kg. This was around 15 years ago. To reclaim his health, he started running. Just five to ten minutes at first, and then more later. Today, he is a serious runner who brushes off 21 km a few times every week. His weight is down to 67 kg. The sweets are under control. There are phases when he can’t resist his beloved slabs of Dairy Milk chocolate, but they last just two or three days after which he compensates with hard training.

VAIBHAV JAIN, A marketing manager with Aircel, had a sobering experience when he was overtaken by a much older man during the 2008 Mumbai marathon. “I was just 22 at that time, and he was over 50,” Jain says. “He was running barefoot and very slowly, but at a consistent pace. I overtook him once, but eventually he passed me. The next day, he was written about in the papers. I was inspired and also realised I had to run better.”

Having been a sprinter at school, it did not take long for Jain to rebuild his stamina.

Running also pushed him to undergo a surgery for sinusitis. “I was living with, but wanting to improve my performance was the incentive to get the surgery done,” he says. Prior to long distance running, the 5 foot 6 inch Jain’s weight was 72 kg and waist 34 inches. Now it is 62 kg and 30-32 inches.

There are some people who have shifted the focus of their careers because of their love for fitness and running. One of them is trainer and runner Raj Vadgama. “I’m a Gujarati Portuguese,” he jokes as he sips tea after a run one Sunday, a film of cream draped over the edge of the cup. The 46-year-old Vadgama, who is also an expert at martial arts, has been in the fitness industry for 27 years. He is also an interior decorator. But he derives more satisfaction from helping people get into shape and teaching ladies techniques of self-defence in this country of louts. So he has scaled down his interior decoration business to spend time on that.

Vadgama is not content doing just the half and full marathons. He also participates in ultra-marathons, which involve running (or walking) beyond the 42.195 km length of the classic marathon. Be it cars or legs, to Indians, it’s about getting maximum mileage.