Three Men in a Theatre

The astonishing story of three young men who got addicted to Hollywood in the late 1940s and could not give it up as they slowly became old men and the world around them changed. 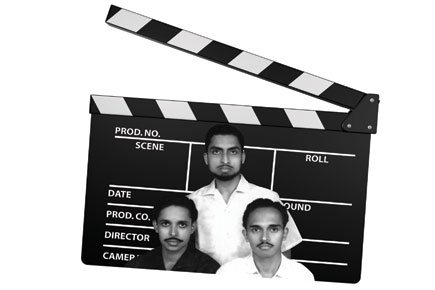 The story of three young men who got addicted to Hollywood in the late 1940s and could not give it up.


Ladakh has austere beauty; no embellishments. What’s left is what you have. It seemed the perfect setting to receive news of a demise. Late June, 2009. Ayyappan Pillai was no more. He had been ailing, a consequence of the general weakness that comes with age, though the only complaint he ever muttered was that damn cataract in the eye.

“You have seen this film before. That’s Merle Oberon. Quick, tell me who the hero is,’’ 75- year-old Pillai’s poser was like a test to his old friend. Susheelan, who had just walked into the quiet house at Pettah in Thiruvananthapuram, slowly warmed up to the challenge. Anything Hollywood was an enjoyable return to old times. “Melvyn Douglas,’’ he said after a pause. Pillai smiled with satisfaction, switched off the television and turned to me, “Now, we can talk.’’ The thin man with an unforgettable, bearded face had watched at least 7,500 American films in a total of almost 8,000 films he claimed to have seen in his life. The count, which excluded the several times he saw his favourite films, was still rising.

Pillai was seven years old in 1941 when he saw his first Hollywood film in Thiruvananthapuram’s New Theatre. It was The Hunchback of Notre Dame starring Charles Laughton as Quasimodo. It made an impression. He was soon watching a string of Tarzan films with Johnny Weissmuller as the jungle hero. In 1948, a major city landmark—the Sreekumar Theatre—opened with the film It’s A Pleasure. “The Norwegian skater and Olympic gold medalist, Sonja Henie was the heroine,’’ Pillai recalled.

In his years in intermediate college, his film-going habit became an addiction. It saw the coming together of a trio often hailed in Thiruvananthapuram as ‘The Three Musketeers’ —Pillai, his longstanding schoolmate Susheelan and new friend US Menon, who was my uncle. They became a regular fixture at local theatres. In the process, they bunked classes; avoided lunch to save money for tickets and sold old books on the sly to generate additional funds.

People who were interested in buying those books would usually wait till the time of the show. “Then in desperation, we would cave in and settle for a lower price,’’ Susheelan said. Unlike today, films changed once in two days then. Occasionally a popular film or one having educational value, like an adaptation of Shakespeare, would stick around longer. Special was the Sunday morning show, screening black and white British films, which Pillai religiously attended. “I saw Man in the White Suit starring Alec Guinness, this way,’’ Pillai said. The trio averaged two to four films a week. In tune with the political climate of the period with its plenary for political parties, the three friends called their film discussion meetings plenums. Their idols were John Wayne, Clark Gable, Gary Cooper and Gregory Peck. Hollywood fascinated the young boys because its films were entertaining and convergent, blending a variety of talents and backdrops. “There wasn’t a situation in real life we hadn’t seen on film,’’ Susheelan said.

College education briefly split the three. Menon was sent to Alappuzha and Susheelan to Kollam. They missed Hollywood but occasionally travelled to the state capital to watch films. But they were reunited in 1958. All of them found jobs at the state secretariat in Thiruvananthapuram—Pillai in the public department, Susheelan in the legislature and Menon in law. Unlike before, the trio was now independent and had some money. Evenings, quite naturally, were about movies. Their tastes were subtly different. Pillai was heavily partial to English films; Menon tracked a mix of English and Hindi while Susheelan was game for English, Hindi, Malayalam and Tamil. “Pillai and Menon didn’t enjoy vernacular films,” Susheelan said. They were now recognised film buffs in the city and had seats awaiting them at theatres.

Talking to Pillai and Susheelan opened a window to a period in India when watching movies was a truly quaint experience, something unimaginable now. “The train from Chennai would get delayed and we would wait impatiently at the theatre for the reels to arrive and the film to begin. It eventually came on the back of a cycle or on somebody’s head,’’ Susheelan said.

What they both loved to remember though was the audience. Some were quiet, many were regulars, some had to work extra hours to earn the money to fund the passion. (According to Susheelan, the Sreekumar Theatre, which was the best in Thiruvananthapuram, charged Rs 2.50 for a balcony ticket then. The cheapest ticket was four annas, about 25 paise today, which could fetch a tea at the Xavier’s restaurant, believed to be the best tea in town, made for two and served in a porcelain pot.)

They had a particularly fond memory of a former mayor of the city, Ponnara Sreedhar. Not wanting to disturb the audience with his persistent racking cough, he always watched films from the doorway of the Sreekumar Theatre.

In 1964, Susheelan moved to Kolkata, joining Newkem Insulations. He initially stayed at Kalighat; shifting later to Lansdowne Road. The job required a lot of travelling but as long as the tour was within 200 kilometres of Kolkata, Susheelan managed to return, in the middle of his tours, to watch films.

In December 1965, Menon too moved to Kolkata. He struggled for a while before joining Geoffrey Manners & Co. The duo resumed their film going, frequenting theatres like Metro, Lighthouse and Minerva. Saturdays were reserved for films. The routine, as Susheelan remembered, was—a film in the Esplanade area, visit Mrs Mukherjee’s provision store for a bottle of rum, take a taxi home and settle down for a discussion. According to Pillai, Menon, who was the serious sort, joined a film society in Kolkata. “He once spoke to Satyajit Ray,’’ Pillai said. The three men held the director in high esteem for his honest appreciation of good films, including Hollywood. The high point for Susheelan was running into Ray and Shashi Kapoor at the Grand Hotel. In the mid-70s, Susheelan left Kolkata for Libya. Hollywood movies were rare in Tripoli and he recalled rushing to see The Stalking Moon starring Gregory Peck.

Meanwhile in Thiruvananthapuram, Pillai became a regular at the theatres. The film society movement had kicked off in Kerala and noted filmmaker Adoor Gopalakrishnan was anchoring one of them, Chitralekha. Pillai, who was a member, soon quit the society because he perceived a needless disrespect for Hollywood in the outfit. Around the same time, the recreation club of the local accountant general’s office decided it was time their informal film viewing sessions graduated to becoming a formal film society. They nominated Pillai as vice-president of the Kerala Film Club. It lasted two years, showing films of masters like Roman Polanski and Andrei Wajda. Then it wound up due to financial problems and stiff competition from other societies.

Rocket Club, a group of officials from the Indian Space Research Organisation (Isro), started a film club called Chalachitra. The driving force behind the club was a man called Nataraja ‘Soorya’ Krishnamurthy, who later started the Soorya Stage and Film Society, one of the most eminent cultural organisations in the country. Pillai was vice-president of Chalachitra. Those were exciting times indeed, the highlight being a half-hour conversation with director Mrinal Sen, who was visiting.

In 1986, Pillai bought a video player. And with the help of a resourceful video library, caught up on all the viewing he’d missed—films he’d never seen to films banned for a variety of reasons. Like Cruising, Dog Day Afternoon, Last Tango in Paris and Caligula. “Probably 30 to 40 per cent of the 8,000 films I have seen were on video,’’ he said.

Meanwhile, Thiruvananthapuram itself was changing. Screening of English films at mainstream theatres was on the decline. There were other developments, too. Susheelan returned from Tripoli to become a jeweller in Thiruvananthapuram. In 1993, Menon died of a heart attack while on a business trip to Kochi. The last film he saw in a theatre was Scent of a Woman at Kolkata’s state-owned Nandan complex.

Susheelan’s enthusiasm too, had waned somewhat. Film lover he still was, but his love was more the quiet, unspoken kind. Unlike the irrepressible Pillai, still living, talking and breathing film. Cataract operation done, he was back to seeing four to five films a day on television. “For us, films were clearly an addiction,’’ he said, citing instances when he and Susheelan had sneaked out of funerals to catch films. Since 1941, there was only one time Pillai had been defeated in his attempts to see Hollywood films—when the government posted him to the Lakshadweep islands.

On the second evening of our chat, the duo dug out old albums to gaze at long gone friends. Among the pictures was one of the trio in their younger days. Then Pillai gave me a hand-written set of papers containing his postal address and a list of 14 films still evading him. “If you come across them, please let me know,’’ he said. I got him the VCD versions of two.

Of all the times that I met Pillai, one instance remains etched on my mind. I was on holiday in Thiruvananthapuram. After watching Mel Gibson’s Apocalypto at a local theatre, I was lazily adjusting my eyes to sunlight in the foyer, when I spotted a familiar bearded, lean figure being assisted down the staircase by the usher. There were no pleasantries, the conversation cut straight to cinema. “Good film,’’ he said, “the usher is an old friend who still remembers me from the time we used to frequent theatres. He will walk me to the exit.’’

(The author is a freelance writer based in Mumbai)