The Yin and Yang of Yachts

Vanity. Style. Millions to spare. If you’ve got them, welcome to the high life on the high seas. Where you’re master and commander of all you see 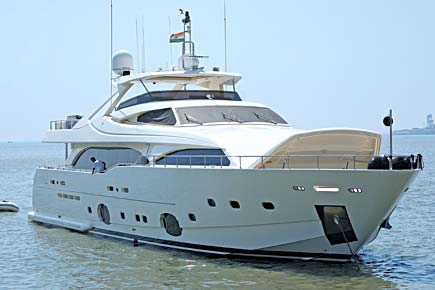 Vanity. Style. Millions to spare. If you’ve got them, welcome to the high life on the high seas. Where you’re master and commander of all you see


It’s art, it’s power. It’s love, it’s force. It’s the art in power. It’s the power in art. The love in force, the force in love. The yacht is that one vanity that delivers clarity to the world of wealth. Those in possession of one know exactly what we’re talking about. The rest, alas, must make do with interim clues and surrogate experiences.

Your correspondent has done the experience part, and the clues continue to come in. It was an experience available to customers of Infinity Bay Resorts, Goa. Any owner of a villa there had a luxury yacht to himself or herself as a matter of expedience. To run the odd errand, you know—be it to an offshore location on the high seas, or Mumbai, even Malibu for that matter. A friend had dropped in from an Infinity Bay villa for a look at the wounded republic of Colaba after the 26 November attacks. It was a worthwhile expedition. While he walked his way down this stretch of South Mumbai, I took to sea.

Of all moments of liberation, nothing could be close to venturing into the open sea in the privacy of one’s own vessel. Even a trip to outer space would be weighed down with encumbrances. This is different. There is no mission control. You are your own master.

And a yacht is a yacht. Luxury lavishes its presence even in the sound of your shoes on deck. Peer inside, and there’s pretty much everything money can buy. The adrenalin rush, however, comes from none of this. It comes from the engineering. As the engines whirr and set the craft swishing forth at heart-stopping speed (measured in knots), you find yourself doing what (you think, at least for that flash of sensation) no one has done before: part the sea while walking on water.

No, it’s not for mere millionaires. It’s for those millionaires, and only those, who want their millions to have meaning.

As yachts go, mine was not what you might term humble. It was a 42-foot handmade boat from the UK, a Princess Yacht belonging to a firm owned by LVMH, that fancied maker of ladies’ handbags that cost as much as SUVs. The boat was a beauty. My first glance was enough to bring Bruce Springsteen’s words wafting back to me: “…a life of leisure and a pirate’s treasure together don’t make much for tragedy.”

I embarked with those lines running through my head, and sat down as the boat made its way out of Bombay Harbour. Before I knew it, the yacht’s speed was pushing 30 knots an hour, and Mumbai was Blur-by. The urge to explore the boat took over. Between the cockpit and saloon was an automatic triple sliding door that opened into a spacious galley.

My bedroom was done up in mahogany oak. It had an ivory felt carpet and a wine chiller packed with vintages that promised visions of burgundy bohemia. The drapes were no less luxuriant; they turned the ocean and speed into a distant memory, a gentle hum. I got the point. As in a Rolls Royce, the engine was designed to mark its presence only as a ghostly whim, something that transforms the scenery from the window at the tick of a clock. I felt strangely static, as if the thrill of speed was an illusion that had been flicked off.

On a yacht, the operative word is privacy. The support staff is almost invisible, as if any sign of their existence could pose a threat to your sense of seclusion. For anyone who has had to shake off the paparazzi, this is bliss. Worth every bit the $2 million or more it costs.

To make a yacht excursion worth still more, perhaps quite a bit more, your travel needs to exceed 12 nautical miles. The number 12 is important. It’s the nautical equivalent of escape velocity: cross that distance from shore, and no national laws apply any further. To the coastguard, you’re beyond jurisdiction. To orbiting satellites, you’re just a speck on the high seas. To anybody else, it’s just you and your rules, like it or lump it.

That’s the reason that the wildest parties Indians host are never on Page 3. They are on the high seas. So the next time your commercial jetliner descends on Mumbai or Goa for landing, strain your vision on the boats below, sparkling like diamonds adrift at a distance from the coast. You might possibly see (or think you see) something that you’re not supposed to, something much less ennobling than parting the sea or walking on water.