With a little help from the Tata Group, man has managed to replicate photosynthesis in a lab. In the future, you could well have an artificial leaf powering a house in an Indian village 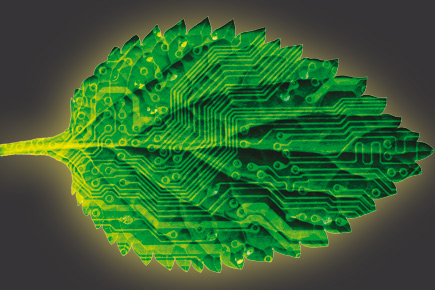 With a little help from the Tata Group, man has managed to replicate photosynthesis in a lab.


It is almost a tautology to claim that most of the energy we use on earth has its origin in the sun. The food we eat, the coal and gas we burn, eventually trace their way back to a vast array of photons striking the earth. Our own efforts to directly tap this ubiquitous energy have been largely ineffectual. Solar panels do work, but the cost of generating electricity in this manner exceeds the cost of using fossil fuels, especially if we do not factor in the environmental damage caused by the latter. Yet, plants seem to achieve this miracle with ease, producing sugars and carbohydrates from photosynthesis at no great cost, which are then converted into more complex molecules that form the basis not only of our bodies but our fuel.

The principles on which a leaf works have been known for a long time, but replicating them has been another matter. Now a team led by MIT scientist Daniel Nocera and funded by the Tata Group has achieved a breakthrough that may make this possible—and in an affordable way—within the decade. An artificial leaf, at the moment a slab of silicon the size of a playing card coated with catalysts on both sides and encased in water, could well generate enough energy for a household in an Indian village. The actual prototype, though, would be much larger; it would take a leaf the size of a door placed in a gallon of water to power a house, but scaling the technology up does not seem a problem.

“A practical artificial leaf has been one of the Holy Grails of science for decades,” said Nocera, speaking at a meeting in March this year of the American Chemical Society (ACS) where he first unveiled a working prototype. “We believe we have done it. The artificial leaf shows particular promise as an inexpensive source of electricity for homes of the poor in developing countries. Our goal is to make each home its own power station,” he added, “One can envision villages in India and Africa not long from now purchasing an affordable basic power system based on this technology.”

‘Holy Grail’ and ‘breakthrough’ are among the most overused terms in the media’s science reports, but occasionally there is a step forward that deserves these descriptions, and this is one. To understand why the feat has taken so long requires a little background that goes back to school biology.

Photosynthesis is a two-step process, and it is the first step that requires light—to split water into hydrogen ions and oxygen. In essence, the chlorophyll in plants absorbs a photon and releases an electron, which is then used to split water. The ability of plants to release an electron in this fashion is still under study, but this part of the first step has already been replicated by humans (this is exactly what a solar cell does, release electrons when sunlight falls on it).

Nocera’s artificial leaf uses a silicon cell, but instead of tapping the current in a wire, it uses the electron directly, as does a leaf. It then uses the electron to split water, a reaction that requires a catalyst. It is this catalyst that makes the difference between the artificial leaf being a practical alternative or just a technological marvel. As the ACS release describing Nocera’s breakthrough states, ‘The first artificial leaf was developed more than a decade ago by John Turner of the US National Renewable Energy Laboratory in Golden, Colorado. Although highly efficient at carrying out photosynthesis, Turner’s device was impractical for wider use, as it was composed of rare, expensive metals and was highly unstable — with a lifespan of barely one day.’

In an interview to National Public Radio (NPR), Nocera describes how he has been able to move beyond Turner’s work:“We take silicon in place of the leaf, and then that can produce the wireless current, and we’ve created two new compounds or what are called catalysts that then split water into hydrogen and oxygen, just like a leaf, and that’s why we call it an artificial leaf.”

The catalysts used by Nocera’s leaf are what make it a practical breakthrough. In laboratory studies, his artificial leaf prototype can operate continuously for at least 45 hours without a drop in activity using inexpensive catalysts, made of nickel and cobalt, that are capable of efficiently splitting water into its two components, hydrogen and oxygen, under simple conditions. Right now, Nocera’s leaf is about 10 times more efficient at carrying out photosynthesis than a natural leaf.

These catalysts are also the big difference between solar cells and Nocera’s artificial leaf. Much of the cost of such a solar cell is in the wiring used to capture and transport current. In the same NPR interview, he stresses the point: “Most of the cost of a solar panel is the wiring of it and all the other stuff, not the blood and guts, the silicon costs. So now we’ve sort of ripped out the inner core of a solar panel. We’re just using the silicon. The catalysts that are cheap and earth-abundant are on that silicon. But I’m making gases, hydrogen and oxygen, over the surface of the silicon… So what needs to be done now, specifically, in next steps, is to engineer a gas collection system so that those gases can be collected and then used… later on, when the sun goes down, to power your house or do what you need to do.”

But even as more needs to be done, Nocera has already managed to do what has not been achieved before: his artificial leaf can sit in a bucket of water out in the sun and generate oxygen on one surface and hydrogen on the other. Unlike a battery, which requires an acidic or alkaline medium, this artificial leaf works perfectly well with water that needn’t even be clean.

Nocera still has another step to complete, though, before we have a workable artificial leaf. A leaf takes the hydrogen ions produced by the first step of photosynthesis (that uses photons) and synthesises carbohydrates using carbon dioxide absorbed from the atmosphere. These carbohydrates are nature’s solution to the problem of storing energy in a stable form. In contrast, storing electricity is far more difficult and expensive.

Nocera’s breakthrough could provide us an alternative to using batteries to store electricity. He does not need to make carbohydrates, all he needs do is find a way to harvest the hydrogen and oxygen bubbling to the surface of his artificial leaf. Nocera told NPR, “So what I showed at the meeting, and the movies that people have shown or pictures—it’s just basically a card, a piece of silicon the size of a card, with my catalyst sitting in a glass of water bubbling away.”

“On one side of the card, oxygen is made,” said Nocera, “On the other side of the poker card, hydrogen is being made. So the gases right up front are separated. So that’s not a big problem. But you’ve got to collect them because right now the picture just shows them bubbling off into the atmosphere.”

What Nocera really has is half an artificial leaf. It lacks the ability to capture and store the products of the first reaction that uses photons, but this is half a leaf more than anyone has managed. The next step is to develop a means of collecting and storing these gases, especially hydrogen. Nocera estimates he is less than a decade away from doing so, which is when the leaf becomes a practical alternative for powering a house: “At the end of the day, you want it to be the size of, like, two doors in a house. That’s how big it would have to be… You can burn hydrogen directly in microturbines, we’re looking at things like that. You can burn hydrogen even in generators and engines.”

“And then for people who don’t like hydrogen, some people don’t because it is a gas, and you’ve got to compress it, then the other thing—you need the hydrogen from water. That’s where all the energy is stored. But there’s a big push now in the United States in the research community to take hydrogen and combine it with carbon dioxide and make a liquid fuel. So there are a lot of options to burn hydrogen or use hydrogen once you get it from water.”

Once this prototype becomes a reality, it will straightaway mount a serious challenge to solar cells. In terms of efficiency, such a leaf will be less efficient than a solar cell (even if it is already ten times more efficient than a real leaf), because it essentially uses the output of a solar cell to break water down with the help of catalysts, but that loss of efficiency is more than made up by the fact that the expenses involved are much lower. It requires no wires for transporting current and no batteries for storage.

The biggest proof of the importance and feasibility of this technology lies in the fact that Nocera has found an investor in the Tata Group. Talking to Mint newspaper on a recent visit to India, Nocera was quoted as saying, “Mr Tata told me, ‘You know what you’re getting with me, right? Patience’.”

The Tata Group seems to have guessed right. Nocera’s work is taking us towards a technology that is a workable alternative to being plugged into the electricity grid. In doing so, it also decentralises the generation of power and thus helps solve the problem of energy in rural areas, where household requirements can be met. There would be no need for the expansive installation and maintenance of the infrastructure that transports electricity over long distances.

As a prototype becomes available, we may well see fashionably greens opting for it, but its real consumers will be those for whom it makes economical sense, people left unconnected by the grid in the far-flung interiors of India and Africa. Eventually, though, it is a technology that ought to find its way to every home indeed. “Nature is powered by photosynthesis,” in Nocera’s words, “and I think that the future world will be powered by photosynthesis as well—in the form of this artificial leaf.”