In the rains, young fishermen who live around this Mumbai beach go out to sea in search of lost jewellery and coins 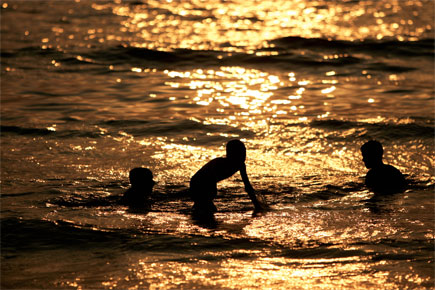 In the rains, young fishermen who live around this Mumbai beach go out to sea in search of lost jewellery and coins


Juhu is a 24-hour beach. Despite attempts by the police to have it vacated at night, people never leave. Each weekend, by one estimate, as many as 8,000 to 10,000 people visit this strip of sand along north Mumbai’s seashore. On Eid, more than a million were expected to turn up, according to a nervous lifeguard who I spoke with a week before that day.

The police, lifeguards and civil defence personnel have to stay alert, working together not only to keep people from drowning, but also to minimise cases of theft, chain snatching, sexual harassment and other forms of crime. Yet they are helpless when the sea claims people’s valuables. Picnickers are often unaware of the water’s tendency to glide rings, bangles, earrings, lockets, chains and other jewellery off their bodies as they frolic in the waves. Even if they are quick to realise it, it is impossible for them to chase their loss in the moving currents.

Given the Indian obsession with gold, most jewellery is made of this precious metal and adds up to a sizeable quantity lost at Juhu beach every year. But the tide also throws back much of what it takes, and the monsoons are the closest the sea comes to returning things. The worse the weather, the higher the chances of valuables being swept within reach of retrieval.

The phenomenon results in an unusual treasure hunt in the rains, with the best swimmers risking their lives in the choppy waters for a glint of gold.

Shaitaan paani—literally, ‘satanic water’—is how fishermen describe the Arabian Sea in the monsoons, says Chandu, a 26-year-old resident of the north Mumbai fishing village of Moragaon. The waves are usually monstrous and turbulence the only assurance.

“Yeh paani bali maangta hai,” he says—the sea demands a sacrifice. His village has had its coastal hutments battered to rubble by the waves this monsoon, the sea level having risen almost 5 metres on several occasions Despite the dangers, Chandu and his friends look forward to the season, especially the hours of dangerous high tides. Under the cover of 2-3 am darkness, they leap across the ropes that bar human entry and wrestle the waves till the early morning, sieving the sand raised by the surf’s underbelly with a contraption called a ‘fuk’. Traditionally used to trap crabs, it looks like a circular sieve made of a fishing net.

Operation Fuk is dangerous but the boys see it as a risk worth taking. Since the government doesn’t let fishing boats ply in the monsoon, the area’s fisherfolk are left to rely on low-paying temporary jobs for four months, a period during which the temptation to strike gold is hard to ignore. Ajay, a 19-year-old, is a regular beachcomber.

During the day, he hides the sieve in his T-shirt and hunts for treasure in the stormy waters of Silver beach, a part of Juhu beach known for its strong currents and many ditches. He dives into waves far larger than himself, surfacing a few metres ahead. At times you see his legs sticking out of the water. Often, only his hands—balancing the sieve. He has to time himself well. When a big wave hits the shore, it momentarily churns up layers of the sandy bottom, exposing rocks and throwing up buried items, and Ajay must sieve the sediments before they settle down again. If he nets something of value, he pops it into his mouth.

On an average day, Ajay finds coins that add up to Rs 20-30. But despite having done this since early adolescence, he is yet to find any gold. This monsoon, he found a one paisa coin with a layer of green patina, dated 1952. He has it on display at home.

According to the lifeguard I speak to, most of those who drown at Juhu are males aged 15 to 26. “Women don’t go in the deep unless they are suicidal,” he says. “Children stay in the shallow. It’s the boys who don’t listen.” What about the daredevils who sift for valuables? “Oh, they are expert swimmers,” he replies.

“They don’t drown even when they are drunk.” But they do make the ground more dangerous by sifting in ditches, deepening and de-stabilising the sands. The lifeguard has written a letter highlighting this problem to his higher ups, but nothing has come of it.

Their sifting may be a nuisance, but these boys are also known to rescue others.

Mahesh, a 30-year-old fisherman, is a hero among Manghelas, a fisherfolk community, for having saved more lives than anybody else. “To become a lifeguard, I need to be tenth pass,” he says, “but to save someone, I need no pass.”

He is lucky with gold. He once found an earring stuck to his foot. He doesn’t count the items he finds, just as he doesn’t count the number of lives he has saved (or corpses he’s retrieved). Finding gold is just a matter of luck, he knows, and is aware that luck can run out.

Unlike his friends, Mahesh doesn’t sell the gold he finds. He will need it for his sister’s marriage (and his own). It is a security cover. If he falls upon hard times, he may need it to sustain himself. “If I go to sell this gold, I can do it easily,” he says, “But if I want to buy the same jewellery, I cannot afford it.”

Though such gold trinkets can be sold via informal deals, it is easy to get duped. This season, Chandu sold a chain and ring that he found for Rs 13,000, but has no clue of the jewellery’s actual value. Sometimes, the boys sell their retrieved items to bystanders. But they do have a regular customer in a jeweller who visits Moragaon on weekends on his bike to buy their catch. The local boys know him by face but not name—a detail they fear could land them all in trouble.

If the seasonal search for gold were better organised, it may have had the makings of a little cottage industry by the sea. But it remains one of Juhu’s best kept secrets, and even if word of it gets around, the boys need not fear much competition.

The risks are enormous and the odds of spotting gold so steep, few would dare join them. What keeps them jumping into the sea is the dream of finding that five-tola gold bangle. Just last season, a fisherman found one. Jewellers do not admit to buying such jewellery of dubious origin, policemen and lifeguards claim not to endorse this activity (let alone seek a share of the catch), and even the boys themselves innocently claim that lost coins are all they are looking for. But when you ask anyone, even a hawaldar, what he would do should he come across a mangalsutra washed ashore by the tide, he would claim it as his own ‘samundar ki dain (gift of the sea)’. And the greater the turbulence, the greater the sea’s generosity.

Chandu recalls Mumbai’s cloudburst of 26 July 2005, a downpour that submerged large parts of the city. Along with his friends, he ferried people across the flooded Juhu Circle with the aid of a large slab of thermacol that he used as a rescue raft. They even helped Hrithik Roshan, he claims. Chandu recalls that episode as three days of hard work, helping people by day and searching for lost items by night. On the night of 26 July, he found five items—a bracelet, earring, jhumka, chain and payal—on Juhu beach. He sold it all to a local jeweller and made a cool Rs 38,000. Everyone found something, he says. Even sofas, chairs, drums and buckets were up for grabs that night. All that could be found on land had washed ashore from the sea.