There’s nothing original about your colour preferences. It seems your tastes come preordained by a bunch of forecasters 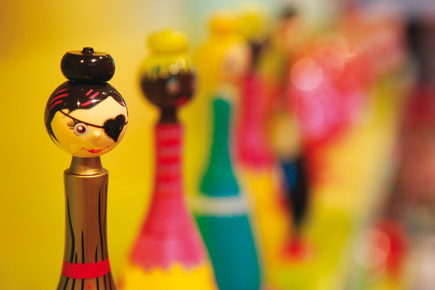 There’s nothing original about your colour preferences. It seems your tastes come preordained by a bunch of forecasters


A rude shock awaits anyone who fancies pink as a colour eternally feminine. Just 90 or so years ago, pink was for boys. It was not quite the ‘new obsession’ that the rock band Aerosmith has been yelling about, but it was pretty much a matter of masculine privilege. ‘The generally accepted rule is pink for the boy and blue for the girl,’ states the June 1918 edition of Ladies Home Journal (look up its internet archive), ‘The reason is that pink being a more decided and stronger colour is more suitable for the boy while blue, which is more delicate and dainty, is prettier for the girl.’

Blue—delicate and dainty? Indian cricketers disagree violently, and have been whacking white leather balls all over the ground to prove it. All it means is that colour codes change; blue, incidentally, was set on its path to modern masculinity by World War I, which had the colour as part of military uniforms. By the 1950s, fashion stylists, magazines and baby bib makers had flipped pink and blue as gender markers. Now, of course, pink is for ladies, a zone of female hegemony so secure that the most seditious of salmon swimming upstream would not be able to change it.

Don’t count on it. For, while you go quietly about your day, associating green with freshness, red with passion (and/or danger) and yellow with warmth, there are a bunch of professionals knocking their heads together in faraway rooms to study and invade your colour consciousness. These are the world’s colour analysts or forecasters, though ‘strategists’ might be more appropriate. Colours impact the way people feel, and their job is to turn a frosty white, say, into golden honey within minutes if that’s what it takes to warm hearts towards something.

None of it happens in a vacuum. Thus it was that colour experts from sectors as diverse as technology, animation, paints and automobiles went into a huddle recently in Taiwan. Organised by the Color Marketing Group (CMG),  a global association of forecasters, the meet’s agenda was to discuss trends for 2012-13 for the Asia-Pacific region. “We had to take into account the environmental, cultural and socio-economic conditions prevailing in the world today,” says participant Latika Khosla of Freedom Tree Design, which has been a colour consultant to companies like Asian Paints, Portico NY, P&G China and FabIndia. “Everyone was aware that after the recent economic crisis, people were a little wary of spending money,” she adds, “Another thing to watch out for was the influence of social networking on global events—for instance, the upheaval in the Middle East.”

Odd as it sounds, Facebook and Twitter have led to several strategy rethinks. “No greys or very conservative colours,” says Latika, “A very different age group surfs the net. Hence one needs to use refreshing, optimistic and edgy colours for websites and signage.”

Patricia Call, a member of CMG’s executive committee and also a strategic colour and trend analyst with Call Designs Inc, draws on the learnings of cultural anthropology to do her job: “Where are we now and where are we going? What time in history was similar to ours socially, economically, politically and culturally? Which colours will appeal to your client for a given product?” These are the questions she needs answers to, before embarking on a colour selection project.

Colours on products sometimes act as satisfiers of subconscious needs. Which is why cars, which often serve as self-projections of power, sell very well in silver, white, black and red. Also, colours like yellow and red that stand out on the street are popular with parents looking for the safety of their kids. “The sports segment has darker colours, while beige is the colour of luxury [for upholstery],” says Anupama  Bhat, who heads the design team at BMD Pvt Ltd, a unit of the LJN Bhilwara group that makes fabric for automobile interiors. “Lately, one has seen a lot of different tones and hues,” adds Bhat, “For instance, Hyundai i10 came out with a chocolate brown, while Maruti Estilo had a red element, besides chocolate.”

Some colours seem to hold multiple promises. “Red is often used for banks and fast food joints to represent fast service and instant gratification,” says trend analyst Harilein Sabarwal, “While soothing colours are used in spas and lounges to help a person relax.” The hospitality and entertainment sectors are especially good at using colours as a way to set moods: say, the turquoise sets of a song-and-dance sequence to suggest a calm sort of stormy-sea passion (example: Mar Jaani from Billu). “There are different colours for different geographical locations as well, based on the light intensity, colours found in nature and the skin tones of people,” adds Patricia.

Cinema offers inspiration to other palette pickers too. The fashion style agency, Promostyl, for example, has decided to let James Cameron’s blockbuster Avatar dictate one of its colour themes. “One of our themes is ‘genesis’, as part of which we are focusing on underwater life. We are mixing powerful ultraviolet colours with tones that are sober and calming. Also, combinations such as turquoise with earthy colours and yellow on white will work very well in the upcoming season,” says Promostyl’s fashion and colour expert, Delphine Lonjou, who was recently in India as part of a seminar organised by India’s Apparel Export Promotion Council.

For any brand, colour choices demand a close observation of people’s attitudes, which must then be harmonised with the brand’s finer values—what it stands for beyond the basics of quality and reliability. Says Latika, “For instance, FabIndia has a very strong textile tradition and artisanal partnership. We had to keep this in mind while designing the packaging for their personal care and food products. There were some 500 diverse items, ranging from honey to exotic jaggery, and yet they all had to reflect the ethos of the company. We used prints and patterns that captured that spirit.”

Colours, say experts, also evolve. What was vivacious once could turn sombre over the years. Says Latika, “This is the natural progression of a colour.” One such example is cobalt blue. Last year, this colour ruled fashion ramps almost everywhere. This year, it has come to adorn industrial appliances. And that’s what makes it the top colour for 2012-13 for a wide spectrum of usages. “It is extremely important for the power it holds in its depth,” says Latika, “It is edgy, shows well, integrates nicely with technology, and talks about the power of water.”

The other signal colours across industries for 2012-13 are yellow and coral pink. “The world is currently a very chaotic place,” elaborates Latika, “Yellow signals optimism and represents the need to navigate safely through this confusion. It will get used in home interiors and small appliances.” Coral pink—not Barbie pink, mind you—possesses an appeal of supreme sophistication. “I saw it in a lot of luxury stores at Hong Kong airport, and it looked simply stunning,” says Latika.

In India, colour matters all the more. With so much diversity of language and dialect, it is the real lingua franca around the country. This spells vast opportunities for those who think colour wise. And if anyone tells you pink is delicate and dainty, just wait till a cricket team adopts it. The IPL already has purple.